How to analyze golang memory?

I wrote a golang program, that uses 1.2GB of memory at runtime.

Using gcvis I get this: 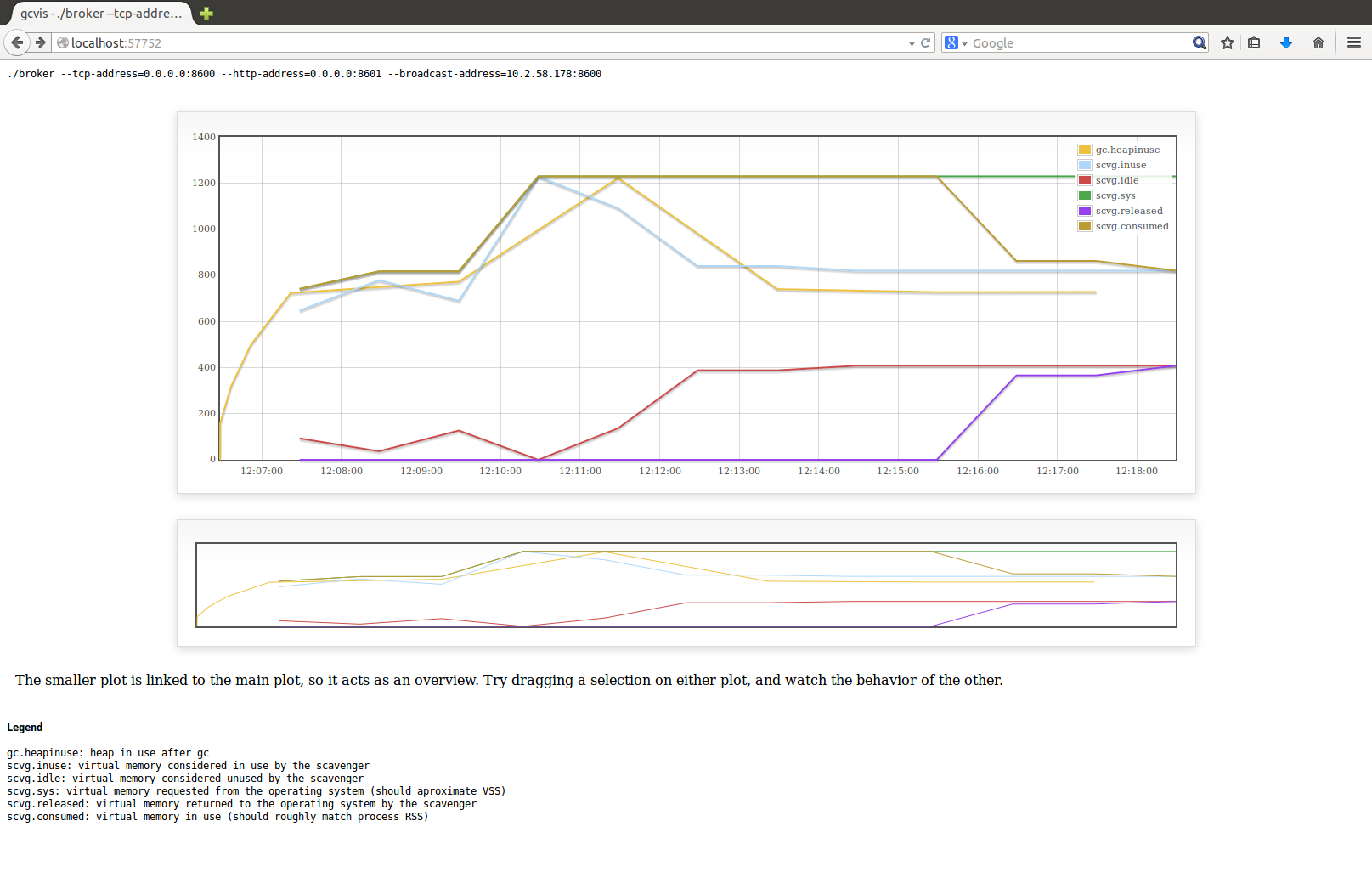 .. and this heap form profile: 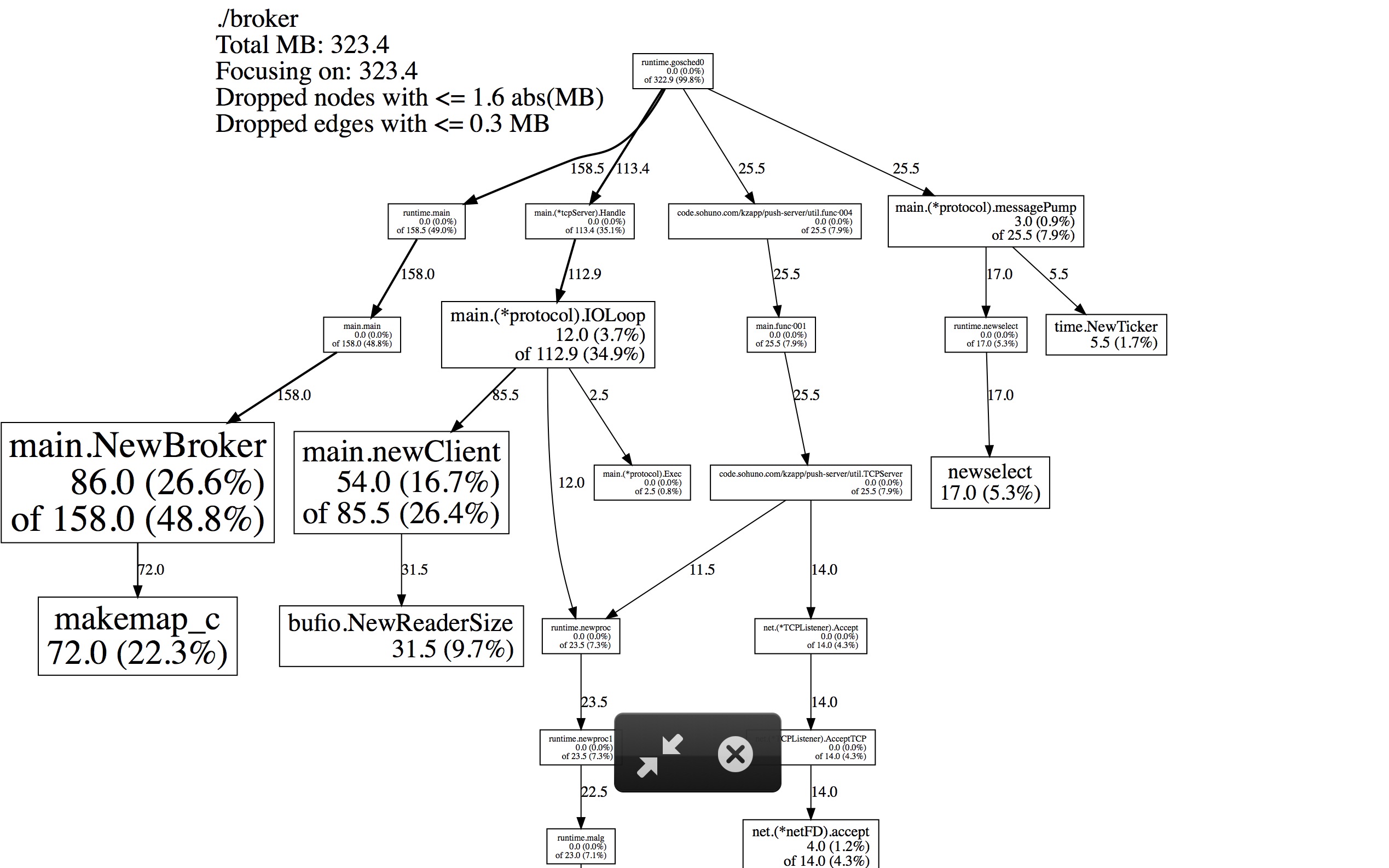 Here is my code: https://github.com/sharewind/push-server/blob/v3/broker

The heap profile shows active memory, memory the runtime believes is in use by the go program (ie: hasn't been collected by the garbage collector). When the GC does collect memory the profile shrinks, but no memory is returned to the system. Your future allocations will try to use memory from the pool of previously collected objects before asking the system for more.

From the outside, this means that your program's memory use will either be increasing, or staying level. What the outside system presents as the "Resident Size" of your program is the number of bytes of RAM is assigned to your program whether it's holding in-use go values or collected ones.

The reason why these two numbers are often quite different are because:

If you want an accurate breakdown of how Go sees the memory you can use the runtime.ReadMemStats call: http://golang.org/pkg/runtime/#ReadMemStats

Alternatively, since you are using web-based profiling if you can access the profiling data through your browser at: http://10.10.58.118:8601/debug/pprof/ , clicking the heap link will show you the debugging view of the heap profile, which has a printout of a runtime.MemStats structure at the bottom.

The runtime.MemStats documentation (http://golang.org/pkg/runtime/#MemStats) has the explanation of all the fields, but the interesting ones for this discussion are:

There will still be discrepancies between Sys, and what the OS reports because what Go asks of the system, and what the OS gives it are not always the same. Also CGO / syscall (eg: malloc / mmap) memory is not tracked by go.

As an addition to @Cookie of Nine's answer, in short: you can try the --alloc_space option.

go tool pprof use --inuse_space by default. It samples memory usage so the result is subset of real one.
By --alloc_space pprof returns all alloced memory since program started.

I was always confused about the growing residential memory of my Go applications, and finally I had to learn the profiling tools that are present in Go ecosystem. Runtime provides many metrics within a runtime.Memstats structure, but it may be hard to understand which of them can help to find out the reasons of memory growth, so some additional tools are needed.

Use https://github.com/tevjef/go-runtime-metrics in your application. For instance, you can put this in your main: 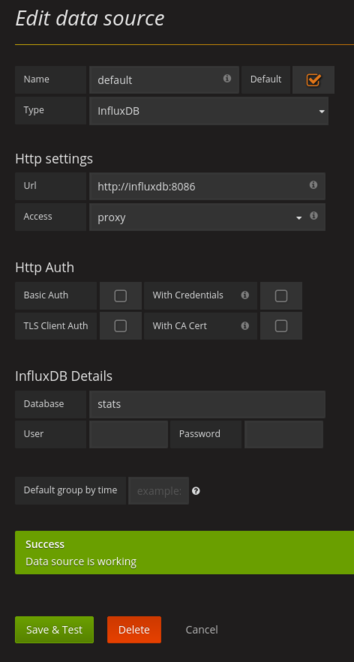 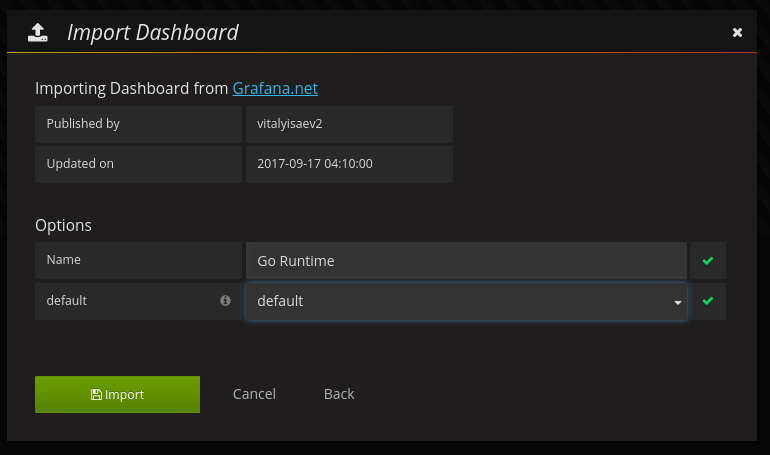 Finally, launch your application: it will transmit runtime metrics to the contenerized Influxdb. Put your application under a reasonable load (in my case it was quite small - 5 RPS for a several hours). 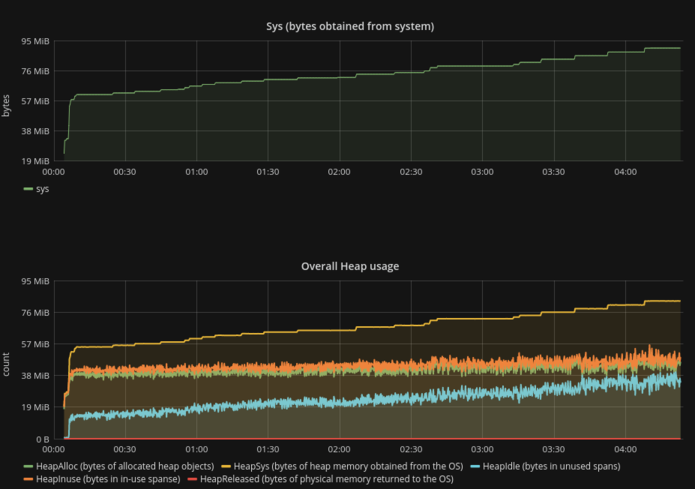 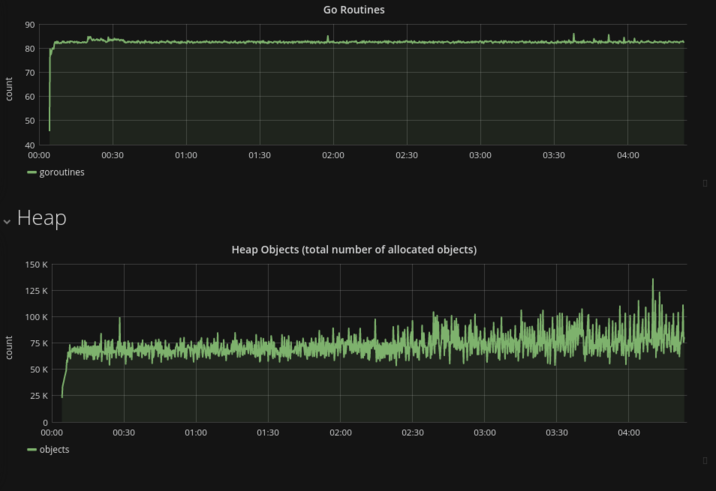 For those who's trying to investigate the problem of memory consumption I would recommend to follow the described steps in order to exclude some trivial errors (like goroutine leak).

It's interesting that the one can significantly decrease memory consumption with explicit calls to debug.FreeOSMemory(): 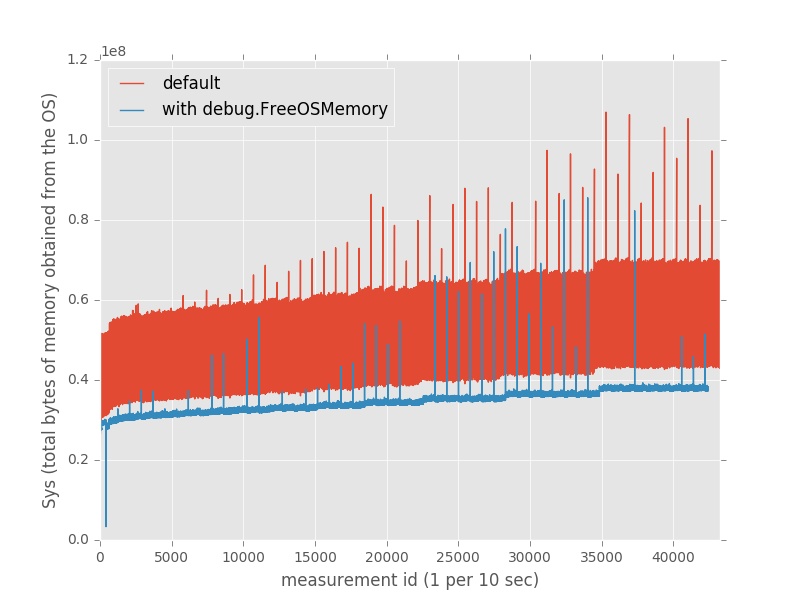 In fact, this approach saved about 35% of memory as compared with default conditions.

You can also use StackImpact, which automatically records and reports regular and anomaly-triggered memory allocation profiles to the dashboard, which are available in a historical and comparable form. See this blog post for more details Memory Leak Detection in Production Go Applications 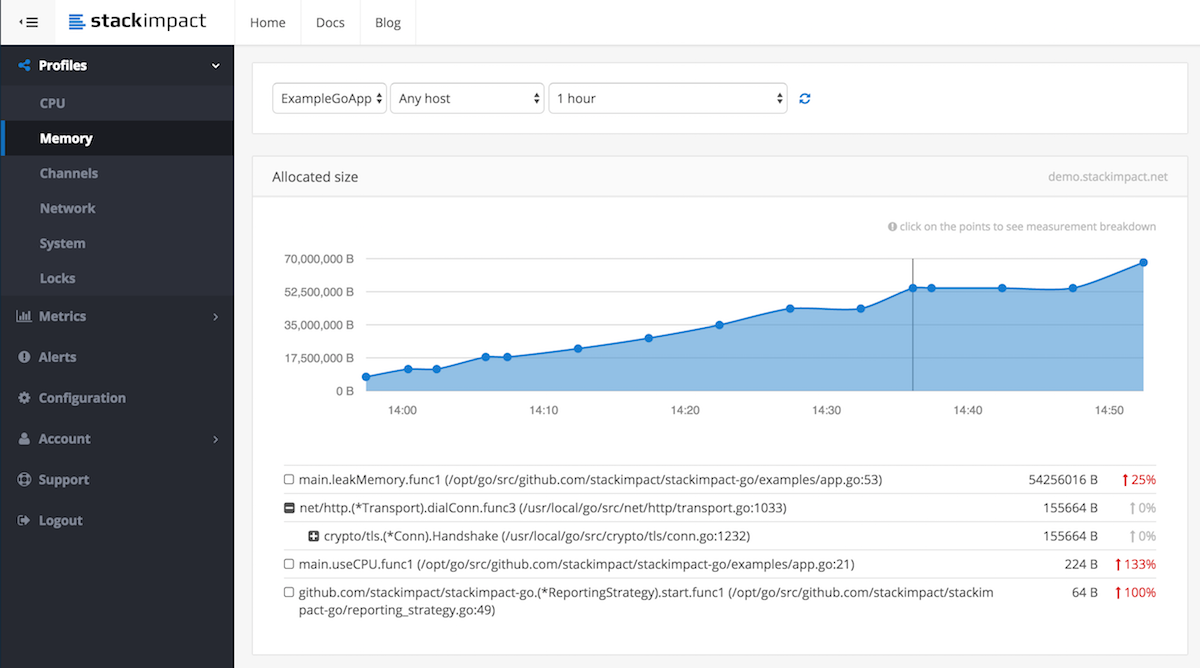 Disclaimer: I work for StackImpact

Not the answer you're looking for? Browse other questions tagged performance memory go profile or ask your own question.

779
How can I measure the actual memory usage of an application or process?
1290
How can you speed up Eclipse?
815
How do I discover memory usage of my application in Android?
1848
How to reload .bashrc settings without logging out and back in again?
3436
How can I create a memory leak in Java?
1534
How to measure elapsed time in Python?
9
How to interpret pprof output?