before this gets flagged as a repeat question please read the end. Thanks for looking.

I set up openCV using home-brew.

These were the commands I used:

I am using the following simple file I found online to test my set up:

This is the error I am getting after trying to compile and run suing g++ test.cpp -o test.

I did find similar issues on stack overflow but none using homebrew and I'm not sure how time- sensitive (with regards to updates and changes to OpenCV, my OS etc) the problem is. I'm using a mac with the 10.9.4 OS. Also those answers weren't really clear to me what should be changed. Many just suggested one line of code without saying where the line should go. I'm extremely novice with these technologies. Any help would be great thanks!

brewdoctor gave me this warning: Warning: You have unlinked kegs in your Cellar Leaving kegs unlinked can lead to build-trouble and cause brews that depend on those kegs to fail to run properly once built. Run brew link on these:

So I ran brew link --overwrite opencv but got this:

You are getting linker errors. I think that is because you are not linking with the correct libraries that opencv requires.

The easiest way to get the correct libraries is with pkg-config, so I would recommend:

Then you may have to reinstall opencv

Then you should be able to do:

to see what it outputs for the g++ compiler if you are interested - it tells the compiler where the libraries and header files are. On my system, it outputs this:

If you are unfamiliar with pkgconfig, you can ask it to tell you all the packages it knows about like this:

Basically, the first word in each line of the list above tells you the names of the packages pkgconfig knows about and that is the name you should specify when running commands such as

If your system is a bit messed up, you can find the .pc file that pkgconfig uses like this:

And then use the config file directly, like this:

If it all compiles correctly, you can run it with

You are getting these errors because you are using OpenCV methods in your code that are not linked to your project.

So far you have only included:

But to run your code you need far more then these two OpenCV libraries. For example let's take the following error when trying to Build your project in XCODE:

which corresponds to this part of your error:

This occurs because XCODE is looking to execute the following function in your code:

but the way you've implemented this, it doesn't know what imread() is, because the reference to the opencv library is missing! the Library that solves this particular problem is:

(Of course the version depends on whatever version of OpenCV you are using.)

To resolve this particular error you have to do 2 steps:

Caution! This could depend on how you've installed OpenCV! If you have installed it using Homebrew.The directory shoulb be here: 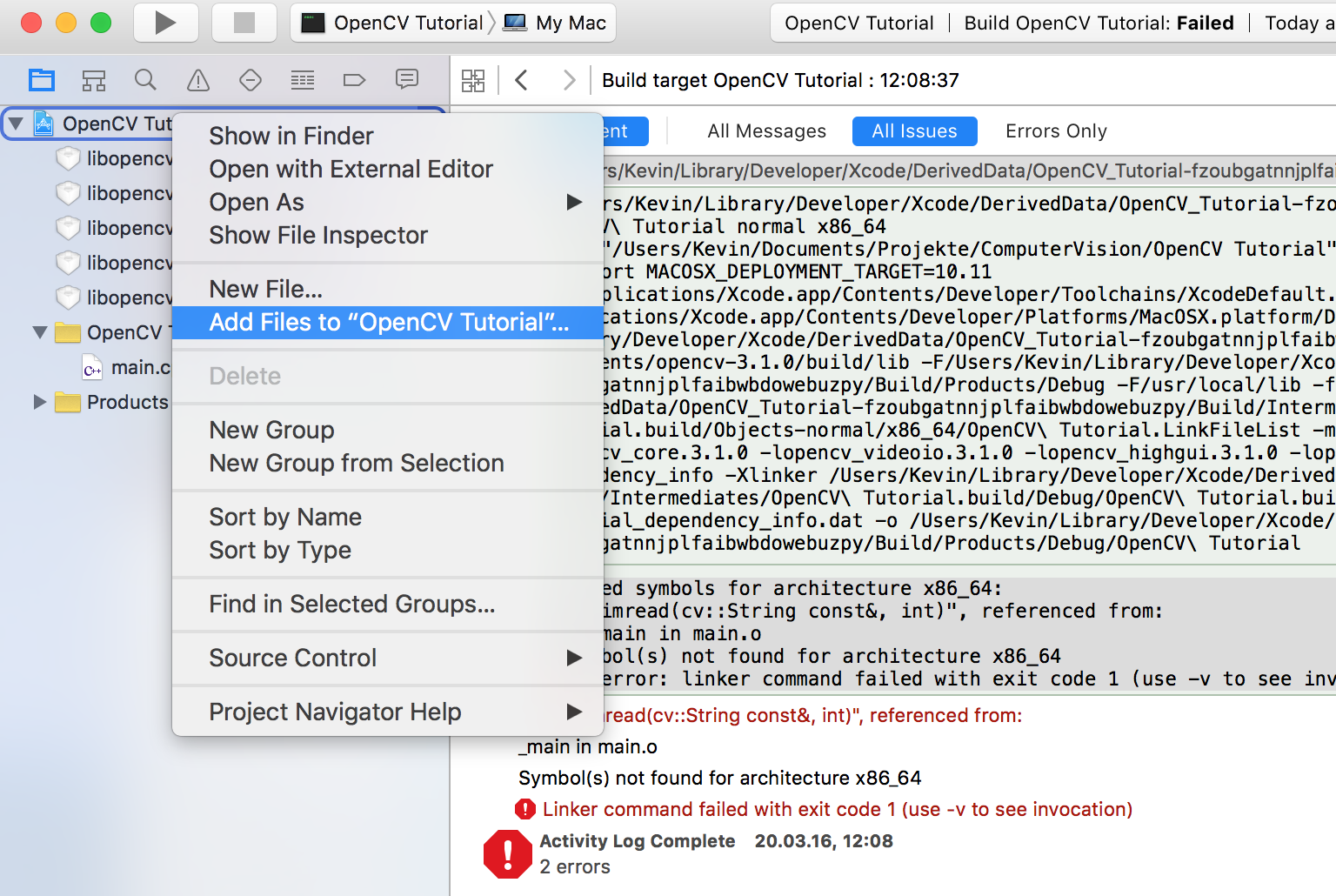 Select the following library (libopencv_imgcodecs.3.1.0.dylib) and add it to your project:

After you have added the Library to your Project it should appear in the list on the left. Double Check that you've picked the right library. Some of them have quite similar names!

As you've done it with:

You should now go on and include the new Library as well:

When you build your program again, you should have one error less. And XCODE shouldn't have a problem to run cv::imread.

As you have plenty of errors, you should now go on by checking which libraries you need to successfully build your program.

I would recommend to Link these libraries as they are very common:

Before going crazy over all the errors you could just link all the libraries and see if it builds correctly.

My problem was that brew compiled and linked with Xcode, and I was using a different version of g++ from macports. I just added the Xcode g++ location to my $PATH variable in my .bash_profile file and unlinked the wrong g++ binary with sudo port select --set gcc none. You can find the Xcode g++ location by running xcodebuild -find g++, mine was /Applications/Xcode.app/Contents/Developer/usr/bin/g++.

Not the answer you're looking for? Browse other questions tagged c++ macos opencv osx-mavericks homebrew or ask your own question.

1551
What is an undefined reference/unresolved external symbol error and how do I fix it?
2
Apple O-Linker Error when try to use OpenCV framework in already working project
0
Undefined symbols for x86_64 when compiling
1
Running OpenCV 3 in Mac Terminal
0
‘Mat’ was not declared in this scope opencv