To be sure no development library was installed in the system, I've set up a virtual machine with a pure Windows XP installation. Then, I've followed instructions as described here and copied all Qt5*.dll into the program directory, as well as platforms/qwindows.dll and icu*52.dll. Dependency Walker confirmed that no broken dependencies were left, i.e. everything should have been correctly set up.

However, for some reasons, when I run my app I see nothing. Neither a window, nor an error message. Running from console also gives me no error. Despite this, I can see my app running in the Task manager, like it is running in background. Running the app on the development machine goes without problem: the app correctly starts and I can see its windows.

What am I doing wrong? How can I deploy a QML app to be sure it will work on any other - non development - machine?

This way works on WindowsXP/Win7 where Qt was not installed.

This what i've figured out so far,

You can't just open a qml file in main.cpp, you have to put those qmls into a resource

Then main.cpp must load it from the resource

then build and check it works, then deploy as follows:

As mentioned by BaCaRoZzo, a general solution that worked pretty well for me is to follow this guide.

To sum it up, copy in an empty directory:

First, during the test of your application, rename your qt folder so it is not found by $PATH, and double-click on MyApp.exe. This should run the program.

NB: It leads to a very big application, so you will need to delete some extra files and folders. The easiest way is for the dll: you run the program, and while being run, you delete all the dll in your new project. Only the ones that are not used by MyApp.exe will be deleted. Efficient!
For the Qt folders, proceed by trials and errors.

You need to deploy the application, for this purpose I use the utility cqtdeployer

This utility itself collects all the necessary dependencies of your application and you do not have to spend your time on it, or you can automate this process.

You can install from github releases (Windows)

You can use as follows:

And Run application with sh script (Linux) or exe (Windows)

If you'll use the version from snap then make sure that you have all the permissions. 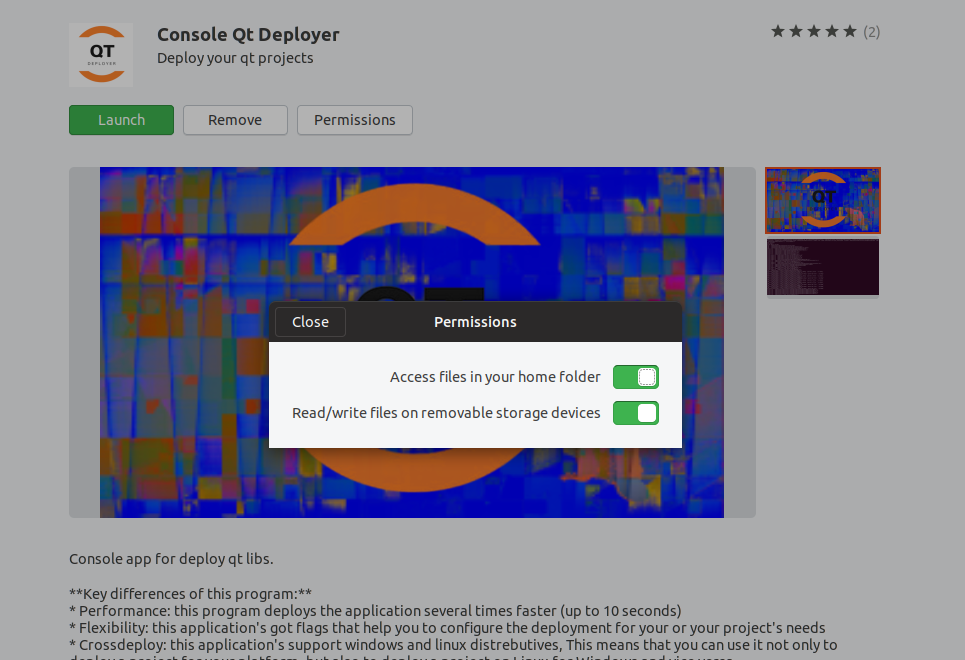 If you need use windows version just install application from installer

use windeployqt --qmldir f:\myApp\sources f:\build-myApp\myApp.exe command. the first argument after qmldir is your qml folder location and the second argument is where your exe is placed. You would get deployable exe on any env.

Not the answer you're looking for? Browse other questions tagged qt deployment qml qtquick2 or ask your own question.

1
windeployqt module QtQuick not installed
0
How To Deploy Qt MinGW application for windows
1
Can't launch Qt Quick Controls application
-1
Qt5 - Why the .exe don't run anything when make a deployment?
1
No windows appears on deployed application on Windows