I'm working on developing an app with Core Data. When I created an instance using:

How could I fix it?

And another question, how can I define an instance method in NSManagedObject subclass?

I have specified class of the entity as in the following screenshot: 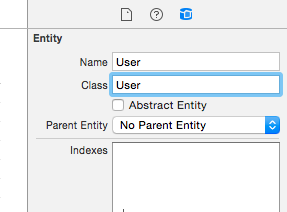 Update for Xcode 7 (final): Prepending the module name to the class (as in Xcode 6 and early beta releases of Xcode 7) is no longer necessary. The Apple documentation Implementing Core Data Managed Object Subclasses has been updated accordingly.

The Data Model inspector has now two fields "Class" and "Module" for an entity: 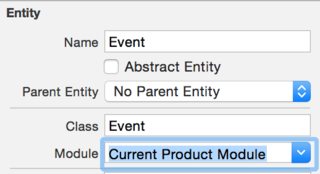 When you create a Swift managed object subclass for the entity, the "Module" field is set to "Current Product Module", and with this setting creating instances works both in the main application and in unit tests. The managed object subclass must not be marked with @objc(classname) (this was observed in https://stackoverflow.com/a/31288029/1187415).

Alternatively, you can empty the "Module" field (it will show "None") and mark the managed object subclasses with @objc(classname) (this was observed in https://stackoverflow.com/a/31287260/1187415).

Remark: This answer was originally written for Xcode 6. There were some changes in the various Xcode 7 beta releases with respect to this problem. Since it is an accepted answer with many upvotes and links to it, I have tried to summarize the situation for the current Xcode 7 final version.

I did both my own "research" and read all the answers to both this question and the similar question CoreData: warning: Unable to load class named. So attribution goes to all of them, even if I don't list them specifically!

As documented in Implementing Core Data Managed Object Subclasses, you have to prefix the entities class name in the Class field in the model entity inspector with the name of your module, for example "MyFirstSwiftApp.User".

Just as a side-note. i had the same issue. And all i had to do was add @objc(ClassName) in my class file.

And that solved my issue.

The accepted answer to this question helped me resolve the same issue but I had a caveat that I thought would be helpful to others. If your project (module) name has a space in it you must replace the space with an underscore. For example:

Remember to remove your module: 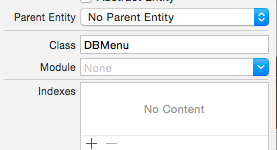 Depending if you are running as App vs Tests the issue can be that the app is looking for <appName>.<entityName> and when it's running as test it's looking as <appName>Tests.<entityName>. The solution I use at this time (Xcode 6.1) is to NOT fill the Class field in the CoreData UI, and to do it in code instead.

This code will detect if you are running as App vs Tests and use the right module name and update the managedObjectClassName.

If you are using a hyphen in your project name like "My-App" then use an underscore instead of the hyphen like "My_App.MyManagedObject". In general, look at the name of the xcdatamodeld file and use the same prefix as in that name. I.e. "My_App_1.xcdatamodeld" requires the prefix "My_App_1"

This may help those experiencing the same problem. I was, with Swift 2 and Xcode 7 beta 2.

The solution in my case was to comment out @objc(EntityName) in EntityName.swift.

The above answers were helpful. This quick sanity check may save you some time. Go into Project > Build Phases > Compile Sources and remove your xcdatamodeld and your model files with the "-" button, and then add them right back with the "+" button. Rebuild -- that may take care of it.

I had the same warning, though my app appeared to run fine. The problem was that when running Editor > Create NSManagedObject Subclass on the last screen I used the default Group location, with no Targets displayed or checked, which saved the subclass in the top MyApp directory where MyApp.xcodeproj was located.
The warning went away when I instead changed the Group to be in the MyApp subfolder and checked the MyApp target.

By the way be careful what you add as a prefix: My App is called "ABC-def" and Xcode has converted the "-" into a "_".

To be safe look into the finder, find your project files and see what it says for your data model (for example "ABC_def.xcdatamodeld") and use what is written there EXACTLY!!!

The above answers helped me to solve different issue connected with Objective-C (maybe it will help someone):

If you refactored entity names, don't forget to change "Class" in "Utilities Panel" as well.

The above answers helped me but this may help somebody. If like me you did them and are still having a problem, remember to simply 'clean your project'. For XCode8, Product > Clean. Then run again.

In Xcode 7 Entity and Class names can be the same but Codegen should be Class Definition. In that case there will be no warning etc. 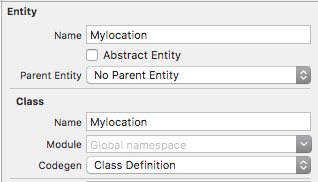 Not the answer you're looking for? Browse other questions tagged ios core-data swift nsmanagedobject or ask your own question.