What is “callback hell” and how and why does RX solve it?

Can someone give a clear definition together with a simple example that explains what is a "callback hell" for someone who does not know JavaScript and node.js ?

When (in what kind of settings) does the "callback hell problem" occur?

Why does it occur?

Or can "callback hell" occur also in a single threaded application?

I took the Reactive Course at Coursera and Erik Meijer said in one of his lectures that RX solves the problem of "callback hell". I asked what is a "callback hell" on the Coursera forum but I got no clear answer.

1) What is a "callback hell" for someone who does not know javascript and node.js ?

This other question has some examples of Javascript callback hell: How to avoid long nesting of asynchronous functions in Node.js

The problem in Javascript is that the only way to "freeze" a computation and have the "rest of it" execute latter (asynchronously) is to put "the rest of it" inside a callback.

For example, say I want to run code that looks like this:

What happens if now I want to make the getData functions asynchronous, meaning that I get a chance to run some other code while I am waiting for them to return their values? In Javascript, the only way would be to rewrite everything that touches an async computation using continuation passing style:

I don't think I need to convince anyone that this version is uglier than the previous one. :-)

2) When (in what kind of settings) does the "callback hell problem" occur?

When you have lots of callback functions in your code! It gets harder to work with them the more of them you have in your code and it gets particularly bad when you need to do loops, try-catch blocks and things like that.

For example, as far as I know, in JavaScript the only way to execute a series of asynchronous functions where one is run after the previous returns is using a recursive function. You can't use a for loop.

The number of questions we get here on StackOverflow asking how to do this kind of thing is a testament to how confusing it is :)

It occurs because in JavaScript the only way to delay a computation so that it runs after the asynchronous call returns is to put the delayed code inside a callback function. You cannot delay code that was written in traditional synchronous style so you end up with nested callbacks everywhere.

4) Or can "callback hell" occur also in a single threaded application?

Asynchronous programming has to do with concurrency while a single-thread has to do with parallelism. The two concepts are actually not the same thing.

What is the difference between concurrency and parallelism?

5) could you please also show how RX solves the "callback hell problem" on that simple example.

I don't know anything about RX in particular, but usually this problem gets solved by adding native support for asynchronous computation in the programming language. The implementations can vary and include: async, generators, coroutines, and callcc.

In Python we can implement that previous loop example with something along the lines of:

This is not the full code but the idea is that the "yield" pauses our for loop until someone calls myGen.next(). The important thing is that we could still write the code using a for loop, without needing to turn out logic "inside out" like we had to do in that recursive loop function.

Just answer the question: could you please also show how RX solves the "callback hell problem" on that simple example?

The magic is flatMap. We can write the following code in Rx for @hugomg's example:

It's like you are writing some synchronous FP codes, but actually you can make them asynchronous by Scheduler.

To address the question of how Rx solves callback hell:

Imagine a case were we must do http to get three resources - person, planet and galaxy. Our objective is to find the galaxy the person lives in. First we must get the person, then the planet, then the galaxy. That's three callbacks for three asynchronous operations.

Each callback is nested. Each inner callback is dependent on its parent. This leads to the "pyramid of doom" style of callback hell. The code looks like a > sign.

To solve this in RxJs you could do something like so:

With the mergeMap AKA flatMap operator you could make it more succinct:

As you can see, the code is flattened and contains a single chain of method calls. We have no "pyramid of doom".

In case you were wondering, promises are another way to avoid callback hell, but promises are eager, not lazy like observables and (generally speaking) you cannot cancel them as easily.

Callback hell is any code where the use of function callbacks in async code becomes obscure or difficult to follow. Generally, when there is more than one level of indirection, code using callbacks can become harder to follow, harder to refactor, and harder to test. A code smell is multiple levels of indentation due to passing multiple layers of function literals.

If you have lots of behavioural dependencies in your code like this, it can get troublesome fast. Especially if it branches...

This won't do. How can we make asynchronous code execute in a determined order without having to pass all these callbacks around?

RX is short for 'reactive extensions'. I haven't used it, but Googling suggests it's an event-based framework, which makes sense. Events are a common pattern to make code execute in order without creating brittle coupling. You can make C listen to the event 'bFinished' which only happens after B is called listening to 'aFinished'. You can then easily add extra steps or extend this kind of behaviour, and can easily test that your code executes in order by merely broadcasting events in your test case.

One way Callback hell can be avoided is to use FRP which is an "enhanced version" of RX.

I started to use FRP recently because I have found a good implementation of it called Sodium ( http://sodium.nz/ ).

selectedNote.updates() is a Stream which fires if selectedNode (which is a Cell) changes, the NodeEditorWidget then updates correspondingly.

So, depending on the content of the selectedNode Cell, the currently edited Note will change.

This code avoids Callback-s entirely, almost, Cacllback-s are pushed to the "outer layer"/"surface" of the app, where the state handling logic interfaces with the external world. There are no Callbacks needed to propagate data within the internal state handling logic (which implements a state machine).

The full source code is here

The code snippet above corrosponds to the following simple Create / Display / Update example : 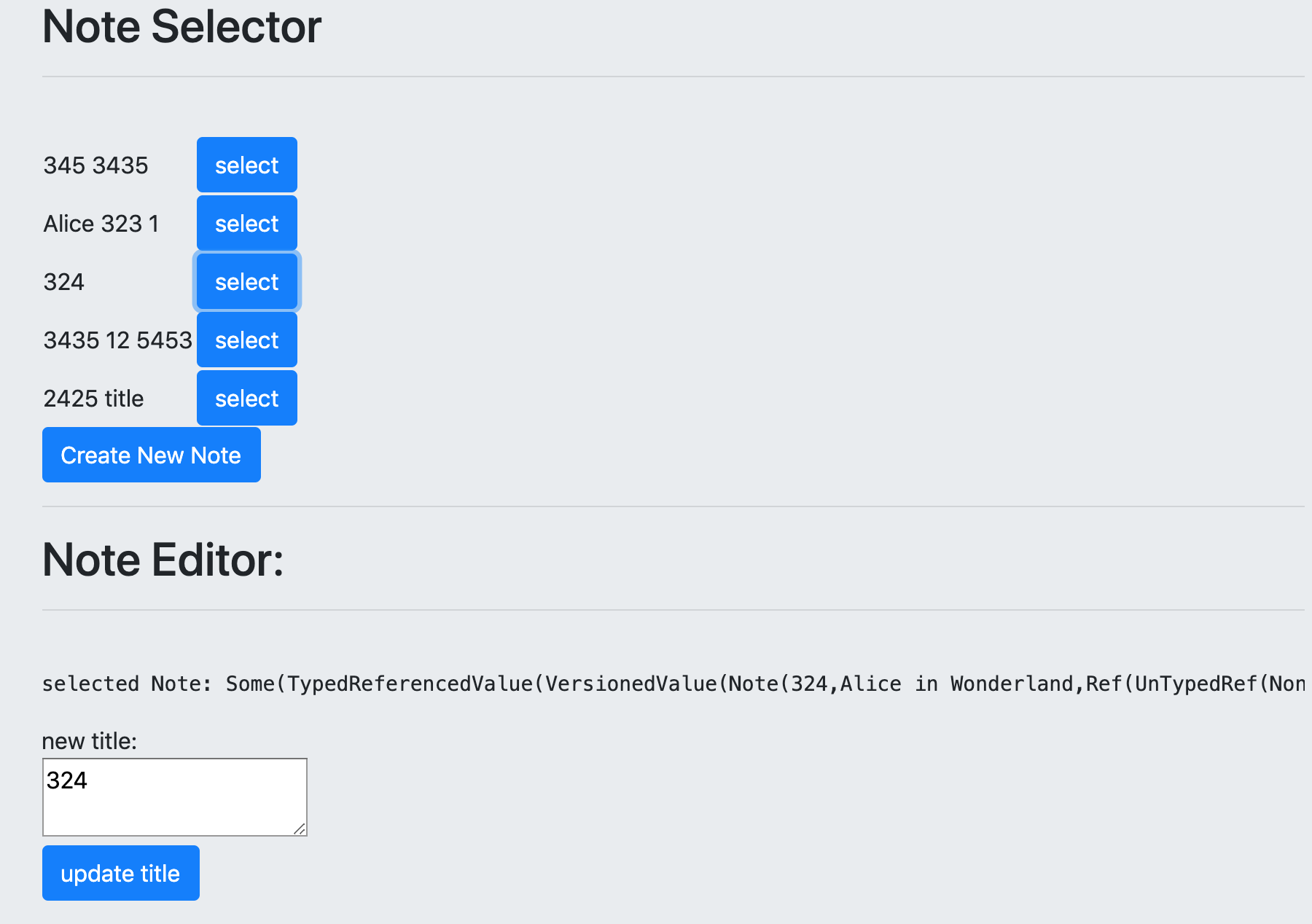 All the event handling is taken care by using Streams and Cells. These are FRP concepts. Callbacks are only needed where the FRP logic interfaces with the external world, such as user input, editing text, pressing a button, AJAX call returns.

Data flow is explicitly described, in a declarative manner using FRP (implemented by the Sodium library), so no event handling / callback logic is needed to describe data flow.

FRP (which is a more "strict" version of RX) is a way to describe a data flow graph, which can contain nodes that contain state. Events trigger state changes in the state containing nodes (called Cells).

Sodium is a higher order FRP library, meaning that using the flatMap/switch primitive one can rearrange the data flow graph at runtime.

I recommend to have a look into the Sodium book, it explains in detail how FRP gets rid of all Callbacks which are not essential for describing dataflow logic that has to do with updating the applications state in response to some external stimuli.

Sodium is also available for Javascript/Typescript.

If you don't have a knowledge about callback and hell callback there is no problem.Ist thing is that call back and call back hell.For example:hell call back is like a we can store a class inside a class.As you heard about that nested in C, C++ language.Nested Means that a class inside a another class.

Not the answer you're looking for? Browse other questions tagged javascript callback language-lawyer reactive-programming rxjs or ask your own question.

0
Improving on the callback structure
1016
What is the difference between concurrency and parallelism?
157
How to avoid long nesting of asynchronous functions in Node.js
6
Node.js detect when two mongoose find are finished
4
Replace callback hell with observable
3
call function after load event end
4
Javascript: Calling a delayed function inside another delayed function
0
How can I run three tasks with parameters in sequence?
0
Fetch data on Splash Screen
0
node js :-null value error in for loop
see more linked questions…