Class does not implement its superclass's required members

So I updated to Xcode 6 beta 5 today and noticed I received errors in nearly all of my subclasses of Apple's classes.

Class 'x' does not implement its superclass's required members

Here is one example I picked because this class is currently pretty lightweight so it will be easy to post.

So my question is, why am I receiving this error, and how can I fix it? What is it that I am not implementing? I'm calling a designated initializer.

From an Apple employee on the Developer Forums:

"A way to declare to the compiler and the built program that you really don't want to be NSCoding-compatible is to do something like this:"

If you know you don't want to be NSCoding compliant, this is an option. I've taken this approach with a lot of my SpriteKit code, as I know I won't be loading it from a storyboard.

Another option you can take which works rather well is to implement the method as a convenience init, like so:

Note the call to an initializer in self. This allows you to only have to use dummy values for the parameters, as opposed to all non-optional properties, while avoiding throwing a fatal error.

The third option of course is to implement the method while calling super, and initialize all of your non-optional properties. You should take this approach if the object is a view being loaded from a storyboard:

There are two absolutely crucial pieces of Swift-specific information that are missing from the existing answers which I think help clear this up completely.

The tl;dr is this:

If you implement any initializers, you are no longer inheriting any of the superclass's designated initializers.

The only initializers, if any, that you will inherit, are super class convenience initializers that point to a designated initializer which you happened to override.

So... ready for the long version?

Swift has a special set of inheritance rules regarding init methods.

All of the information I cover in this section of this answer is from Apple's documentation found here.

From the Apple docs:

Unlike subclasses in Objective-C, Swift subclasses do not inherit their superclass initializers by default. Swift’s approach prevents a situation in which a simple initializer from a superclass is inherited by a more specialized subclass and is used to create a new instance of the subclass that is not fully or correctly initialized.

So, straight from the Apple docs right there, we see that Swift subclasses will not always (and usually don't) inherit their superclass's init methods.

So, when do they inherit from their superclass?

There are two rules that define when a subclass inherits init methods from its parent. From the Apple docs:

Rule 2 isn't particularly relevant to this conversation because SKSpriteNode's init(coder: NSCoder) is unlikely to be a convenience method.

So, your InfoBar class was inheriting the required initializer right up until the point that you added init(team: Team, size: CGSize).

If you were to have not provided this init method and instead made your InfoBar's added properties optional or provided them with default values, then you'd have still been inheriting SKSpriteNode's init(coder: NSCoder). However, when we added our own custom initializer, we stopped inheriting our superclass's designated initializers (and convenience initializers which didn't point to initializers we implemented).

So, as a simplistic example, I present this:

Which presents the following error: 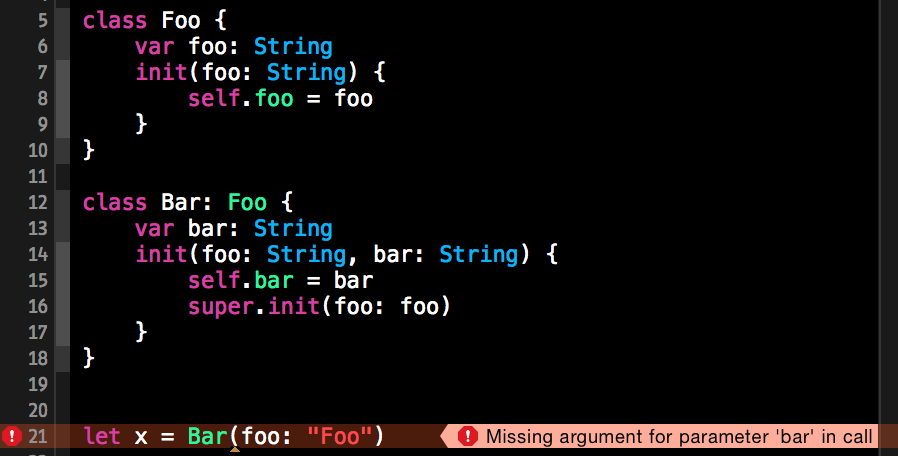 If this were Objective-C, it'd have no problem inheriting. If we initialized a Bar with initWithFoo: in Objective-C, the self.bar property would simply be nil. It's probably not great, but it's a perfectly valid state for the object to be in. It's not a perfectly valid state for the Swift object to be in. self.bar is not an optional and cannot be nil.

Again, the only way we inherit initializers is by not providing our own. So if we try to inherit by deleting Bar's init(foo: String, bar: String), as such:

Now we're back to inheriting (sort of), but this won't compile... and the error message explains exactly why we don't inherit superclass init methods:

Issue: Class 'Bar' has no initializers

Okay, well, why do I have to implement init(coder: NSCoder) at all? Why is it required?

Swift's init methods may play by a special set of inheritance rules, but protocol conformance is still inherited down the chain. If a parent class conforms to a protocol, its subclasses must to conform to that protocol.

Ordinarily, this isn't a problem, because most protocols only require methods which don't play by special inheritance rules in Swift, so if you're inheriting from a class that conforms to a protocol, you're also inheriting all of the methods or properties that allow the class to satisfy protocol conformance.

However, remember, Swift's init methods play by a special set of rules and aren't always inherited. Because of this, a class that conforms to a protocol which requires special init methods (such as NSCoding) requires that the class mark those init methods as required.

This doesn't compile. It generates the following warning:

Issue: Initializer requirement 'init(foo:)' can only be satisfied by a 'required' initializer in non-final class 'ConformingClass'

It wants me to make the init(foo: Int) initializer required. I could also make it happy by making the class final (meaning the class can't be inherited from).

So, what happens if I subclass? From this point, if I subclass, I'm fine. If I add any initializers though, I am suddenly no longer inheriting init(foo:). This is problematic because now I'm no longer conforming to the InitProtocol. I can't subclass from a class that conforms to a protocol and then suddenly decide I no longer want to conform to that protocol. I've inherited protocol conformance, but because of the way Swift works with init method inheritance, I've not inherited part of what's required to conform to that protocol and I must implement it.

Okay, this all makes sense. But why can't I get a more helpful error message?

Arguably, the error message might be more clear or better if it specified that your class was no longer conforming to the inherited NSCoding protocol and that to fix it you need to implement init(coder: NSCoder). Sure.

But Xcode simply can't generate that message because that actually won't always be the actual problem with not implementing or inheriting a required method. There is at least one other reason to make init methods required besides protocol conformance, and that's factory methods.

If I want to write a proper factory method, I need to specify the return type to be Self (Swift's equivalent of Objective-C's instanceType). But in order to do this, I actually need to use a required initializer method.

This generates the error:

It's basically the same problem. If we subclass Box, our subclasses will inherit the class method factory. So we could call SubclassedBox.factory(). However, without the required keyword on the init(size:) method, Box's subclasses are not guaranteed to inherit the self.init(size:) that factory is calling.

Ultimately, it all boils down to the basic understanding that Swift's initializers play by a slightly different set of inheritance rules which means you're not guaranteed to inherit initializers from your superclass. This happens because superclass initializers can't know about your new stored properties and they couldn't instantiate your object into a valid state. But, for various reasons, a superclass might mark an initializer as required. When it does, we can either employ one of the very specific scenarios by which we actually do inherit the required method, or we must implement it ourselves.

The main point here though is that if we're getting the error you see here, it means that your class isn't actually implementing the method at all.

As perhaps one final example to drill in the fact that Swift subclasses don't always inherit their parent's init methods (which I think is absolutely central to fully understanding this problem), consider this example:

This fails to compile. 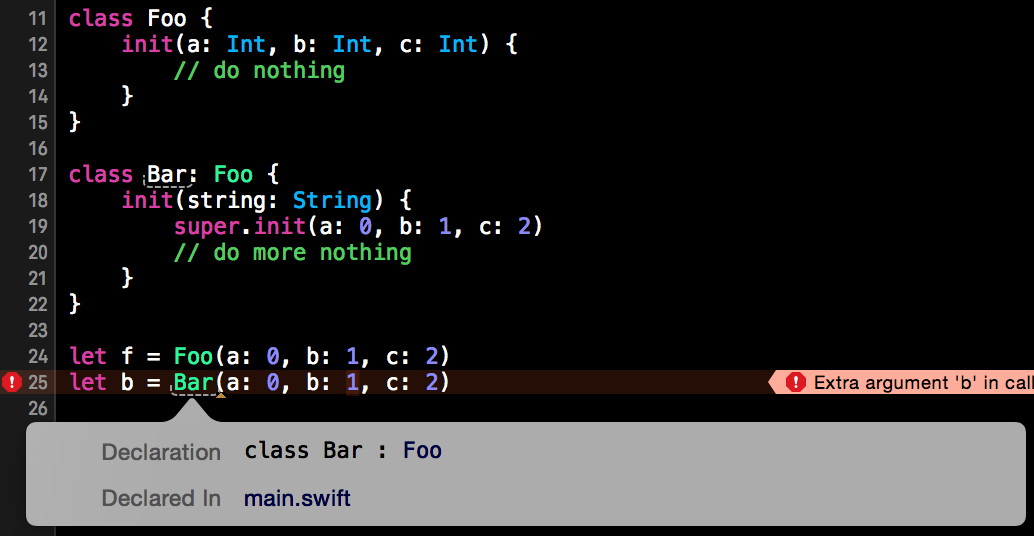 The error message it gives is a little misleading:

Extra argument 'b' in call

But the point is, Bar doesn't inherit any of Foo's init methods because it hasn't satisfied either of the two special cases for inheriting init methods from its parent class.

If this were Objective-C, we'd inherit that init with no problem, because Objective-C is perfectly happy not initializing objects' properties (though as a developer, you shouldn't have been happy with this). In Swift, this simply will not do. You can't have an invalid state, and inheriting superclass initializers can only lead to invalid object states.

Why has this issue arisen? Well, the plain fact is that it has always been important (i.e. in Objective-C, since the day I started programming Cocoa back in Mac OS X 10.0) to deal with initializers that your class is not prepared to handle. The docs have always been quite clear about your responsibilities in this regard. But how many of us bothered to fulfill them, completely and to the letter? Probably none of us! And the compiler did not enforce them; it was all purely conventional.

For example, in my Objective-C view controller subclass with this designated initializer:

...it is crucial that we be passed an actual media item collection: the instance simply cannot come into existence without one. But I have written no "stopper" to prevent someone from initializing me with bare-bones init instead. I should have written one (actually, properly speaking, I should have written an implementation of initWithNibName:bundle:, the inherited designated initializer); but I was too lazy to bother, because I "knew" I would never incorrectly initialize my own class that way. This left a gaping hole. In Objective-C, someone can call bare-bones init, leaving my ivars uninitialized, and we are up the creek without a paddle.

Swift, wonderfully, saves me from myself in most cases. As soon as I translated this app into Swift, the whole problem went away. Swift effectively creates a stopper for me! If init(collection:MPMediaItemCollection) is the only designated initializer declared in my class, I can't be initialized by calling bare-bones init(). It's a miracle!

What's happened in seed 5 is merely that the compiler has realized that the miracle doesn't work in the case of init(coder:), because in theory an instance of this class could come from a nib, and the compiler can't prevent that — and when the nib loads, init(coder:) will be called. So the compiler makes you write the stopper explicitly. And quite right too.

6
Swift do subclasses inherit initializers?
4
Swift - XCode6 beta5 required init(coder) for every class
2
UIView initializer swift Xcode 6 beta 5
144
Why convenience keyword is even needed in Swift?
12
Are view controllers with nib files broken in ios 8 beta 5?
16
What are convenience required initializers in Swift?
8
Missing Argument for parameter ‘coder’ in call
4
In swift, how do I return an object of the same type that conforms to a protocol
3
Swift: How to initialise a let constant in a UIViewController subclass
0
initWithNibName does not implement superclass - Swift
See more linked questions

1302
Xcode - How to fix 'NSUnknownKeyException', reason: … this class is not key value coding-compliant for the key X" error?
794
Xcode 6: Keyboard does not show up in simulator
4
Subclassing SKSpriteNode
1
Create a customized table view cell using swift
15
How: class that inherits SKSpriteNode with init, that can call init(color:, size:)
2
Xcode 6.2 beta 2 WKInterfaceController watchkit error
2
Creating Initializers for SKSpriteNode Subclass
4
Issues with casting celltypes to dequeue
10
Adding a custom UIViewcontroller to subview programmatically but getting an error message "Cannot convert value of type..."