What is the default access modifier for classes, methods, members, constructors, delegates and interfaces?

The default access for everything in C# is "the most restricted access you could declare for that member".

The one sort of exception to this is making one part of a property (usually the setter) more restricted than the declared accessibility of the property itself:

(Note that nested types would come under the "class members" or "struct members" parts - and therefore default to private visibility.)

Non-nested types, enumeration and delegate accessibilities (may only have internal or public accessibility)

² structs cannot inherit from structs or classes (although they can, interfaces), hence protected is not a valid modifier

Note: CIL also has the provision for protected and internal (as opposed to the existing protected "or" internal), but to my knowledge this is not currently available for use in C#.

Have a look at Access Modifiers (C# Programming Guide)

Classes and structs that are declared directly within a namespace (in other words, that are not nested within other classes or structs) can be either public or internal. Internal is the default if no access modifier is specified.

Derived classes cannot have greater accessibility than their base types. In other words, you cannot have a public class B that derives from an internal class A. If this were allowed, it would have the effect of making A public, because all protected or internal members of A are accessible from the derived class.

You can enable specific other assemblies to access your internal types by using the InternalsVisibleToAttribute. For more information, see Friend Assemblies.

Class members (including nested classes and structs) can be declared with any of the six types of access. Struct members cannot be declared as protected because structs do not support inheritance.

Normally, the accessibility of a member is not greater than the accessibility of the type that contains it. However, a public member of an internal class might be accessible from outside the assembly if the member implements interface methods or overrides virtual methods that are defined in a public base class.

User-defined operators must always be declared as public and static. For more information, see Operator overloading.

Interfaces declared directly within a namespace can be declared as public or internal and, just like classes and structs, interfaces default to internal access. Interface members are always public because the purpose of an interface is to enable other types to access a class or struct. No access modifiers can be applied to interface members.

Enumeration members are always public, and no access modifiers can be applied.

Class is Internal by default.

Interface is Internal by default.

Struct is Internal by default.

I would like to add some documentation link. Check out more detail here. 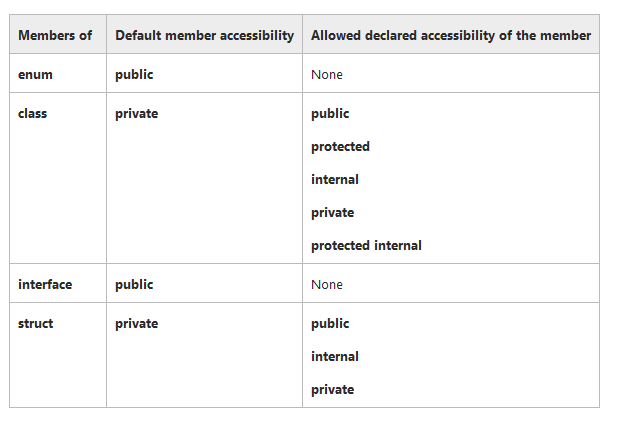 Simplest answer is the following.....

All members in C# always take the LEAST accessible modifier possible by default.

That is why all top level classes in an assembly are "internal" by default, which means they are public to the assembly they are in, but private or excluded from access to outside assemblies. The only other option for a top level class is public which is more accessible. For nested types its all private except for a few rare exceptions like members of enums and interfaces which can only be public. Some examples. In the case of top level classes and interfaces, the defaults are:

In the case of nested classes and interfaces (inside types), the defaults are:

If you just assume the default on c# types is always the most private, then you do not need to use custom accessors until you need to change the default. They are secure out of the box!

Internal is the default modifier

Not the answer you're looking for? Browse other questions tagged c# access-modifiers or ask your own question.

2
Public class, but private member variables?
-1
C# Code is inaccessible due to its protection level, but all CTORS are Public
0
Default Modifier of a Class
-1
Default access modifier for class and variable in C#?
1
Can an Object have an access specifier?
0
Accessing Static Variables C#
0
Inconsistent accessibility issue in c#
0
Access private classes in a class library, from a console app c#
1
protected internal parameter *less* accessible than protected internal method?
-5
What is default access specifier in c# for class and constructor in c# with in different assemblies
See more linked questions