What is the difference between Python's list methods append and extend?

Ask Question
Asked 14 years, 3 months ago
Modified 5 months ago
Viewed 3.2m times
3113
This question's answers are a community effort. Edit existing answers to improve this post. It is not currently accepting new answers or interactions.

What's the difference between the list methods append() and extend()?

append appends a specified object at the end of the list:

extend extends the list by appending elements from the specified iterable:

What is the difference between the list methods append and extend?

The list.append method appends an object to the end of the list.

Whatever the object is, whether a number, a string, another list, or something else, it gets added onto the end of my_list as a single entry on the list.

The list.extend method extends a list by appending elements from an iterable:

So with extend, each element of the iterable gets appended onto the list. For example:

Keep in mind that a string is an iterable, so if you extend a list with a string, you'll append each character as you iterate over the string (which may not be what you want):

Both + and += operators are defined for list. They are semantically similar to extend.

my_list + another_list creates a third list in memory, so you can return the result of it, but it requires that the second iterable be a list.

my_list += another_list modifies the list in-place (it is the in-place operator, and lists are mutable objects, as we've seen) so it does not create a new list. It also works like extend, in that the second iterable can be any kind of iterable.

Don't get confused - my_list = my_list + another_list is not equivalent to += - it gives you a brand new list assigned to my_list.

Iterating through the multiple calls to append adds to the complexity, making it equivalent to that of extend, and since extend's iteration is implemented in C, it will always be faster if you intend to append successive items from an iterable onto a list.

This means that we get the benefits of a larger than needed memory reallocation up front, but we may pay for it on the next marginal reallocation with an even larger one. Total time for all appends is linear at O(n), and that time allocated per append, becomes O(1).

You may wonder what is more performant, since append can be used to achieve the same outcome as extend. The following functions do the same thing:

So let's time them:

Perfect answer, I just miss the timing of comparing adding only one element

Do the semantically correct thing. If you want to append all elements in an iterable, use extend. If you're just adding one element, use append.

Ok, so let's create an experiment to see how this works out in time:

And we see that going out of our way to create an iterable just to use extend is a (minor) waste of time:

We learn from this that there's nothing gained from using extend when we have only one element to append.

Also, these timings are not that important. I am just showing them to make the point that, in Python, doing the semantically correct thing is doing things the Right Way™.

It's conceivable that you might test timings on two comparable operations and get an ambiguous or inverse result. Just focus on doing the semantically correct thing.

We see that extend is semantically clearer, and that it can run much faster than append, when you intend to append each element in an iterable to a list.

If you only have a single element (not in an iterable) to add to the list, use append.

Note that if you pass a list to append, it still adds one element: 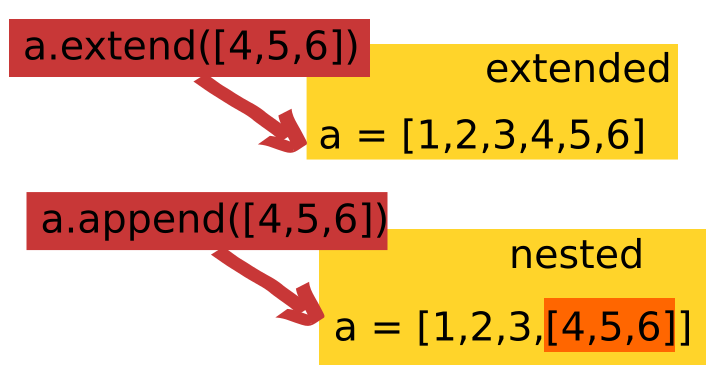 With append you can append a single element that will extend the list:

If you want to extend more than one element you should use extend, because you can only append one elment or one list of element:

Instead with extend, you can extend a single element like this

Or, differently, from append, extend more elements in one time without nesting the list into the original one (that's the reason of the name extend)

Adding one element with both methods

Both append and extend can add one element to the end of the list, though append is simpler.

If you use append for more than one element, you have to pass a list of elements as arguments and you will obtain a NESTED list!

With extend, instead, you pass a list as an argument, but you will obtain a list with the new element that is not nested in the old one.

So, with more elements, you will use extend to get a list with more items. However, appending a list will not add more elements to the list, but one element that is a nested list as you can clearly see in the output of the code.

The latter may be faster as the loop is implemented in C.

The append() method adds a single item to the end of the list.

The extend() method takes one argument, a list, and appends each of the items of the argument to the original list. (Lists are implemented as classes. “Creating” a list is really instantiating a class. As such, a list has methods that operate on it.)

From Dive Into Python.

You can use "+" for returning extend, instead of extending in place.

Similarly += for in place behavior, but with slight differences from append & extend. One of the biggest differences of += from append and extend is when it is used in function scopes, see this blog post.

This is the equivalent of append and extend using the + operator:

extend() can be used with an iterator argument. Here is an example. You wish to make a list out of a list of lists this way:

You may use itertools.chain.from_iterable() to do so. This method's output is an iterator. Its implementation is equivalent to

Back to our example, we can do

Here is how equivalently extend() can be used with an iterator argument:

append(): It is basically used in Python to add one element.

extend(): Where extend(), is used to merge two lists or insert multiple elements in one list.

An interesting point that has been hinted, but not explained, is that extend is faster than append. For any loop that has append inside should be considered to be replaced by list.extend(processed_elements).

Bear in mind that apprending new elements might result in the realloaction of the whole list to a better location in memory. If this is done several times because we are appending 1 element at a time, overall performance suffers. In this sense, list.extend is analogous to "".join(stringlist).

Append adds the entire data at once. The whole data will be added to the newly created index. On the other hand, extend, as it name suggests, extends the current array.

With append we get:

While on extend we get:

An English dictionary defines the words append and extend as:

append: add (something) to the end of a written document.
extend: make larger. Enlarge or expand

With that knowledge, now let's understand

1) The difference between append and extend

2) Similarity between append and extend

I hope I can make a useful supplement to this question. If your list stores a specific type object, for example Info, here is a situation that extend method is not suitable: In a for loop and and generating an Info object every time and using extend to store it into your list, it will fail. The exception is like below:

TypeError: 'Info' object is not iterable

But if you use the append method, the result is OK. Because every time using the extend method, it will always treat it as a list or any other collection type, iterate it, and place it after the previous list. A specific object can not be iterated, obviously.

To distinguish them intuitively

It's like l1 reproduce a body inside her body(nested).

It's like that two separated individuals get married and construct an united family.

Besides I make an exhaustive cheatsheet of all list's methods for your reference.

append "extends" the list (in place) by only one item, the single object passed (as argument).

extend "extends" the list (in place) by as many items as the object passed (as argument) contains.

This may be slightly confusing for str objects.

Append and extend are one of the extensibility mechanisms in python.

Append: Adds an element to the end of the list.

To add a new element to the list, we can use append method in the following way.

The default location that the new element will be added is always in the (length+1) position.

Insert: The insert method was used to overcome the limitations of append. With insert, we can explicitly define the exact position we want our new element to be inserted at.

Method descriptor of insert(index, object). It takes two arguments, first being the index we want to insert our element and second the element itself.

If we try to access the element at pos 2, we get a list ([3]), instead of the element. To join two lists, we'll have to use append.

32
How to merge two dictionaries with same key names
7
Appending to a Python list without making list of lists
7
Add number, then tuple to list as a tuple, but it drops outer tuple
2
'int' object is not iterable while using "list.extend"
5
Copying a sublist into a main list as objects instead of lists
1
How to repeat list's elements with each different n times and in Python?
4
list() function confusion
1
Iterate through a list and split into a 1d list
0
What does the output of the Python extend function mean?
2
Python list .extend method breaks string into characters
See more linked questions