So I used git-subtree to have various branches of repoB in sub-directories of repoA, like so

I did a few commits in repoA using

Some time later, I committed something to repoB/branchA from another repoC, where branchA was added using git-subtree, too.

However, I'm getting a merge conflict for no apparent reason. The changes are simple and don't conflict at all -- as confirmed by patch.

I'm unsure how to fix this error. I already found two four other threads that deal with the same/similar issue:

I'm not sure this is related to different SHA-1s as I did not rebase my commits nor did I edit them; links 1 thru 3.

My problem is more like link 4, where git magically fails to do a simple merge. However, link 3 talks about the subtree merge strategy, not git-subtree in particular, so I'm not sure if this is applicable at all in my situation.

Situation looks to be the same though:

So I noticed that BASE is blatantly wrong in a three-way merge window (kdiff3). However, if that's the case, why doesn't git try to apply all earlier commits since base? Issuing

after the failed merge but before merging/trying to merge shows no duplicated commits prior to the offending commit. The version of the file that's shown as BASE is the file as it was when I first issued

So what's going on? It seems to be related that git subtree cannot find my commits for some reason, yet it does not try to apply the commit from BASE to HEAD~1, but only the commit I'm actually missing, HEAD.

How can I fix this error without screwing up either repository's history? Why can't git pull this simple commit and instead thinks it's a merge conflict?

Any insight will be much appreciated.

Ok, so I figured this out. It was a two-pronged problem. First of all, my tree actually looked like this: 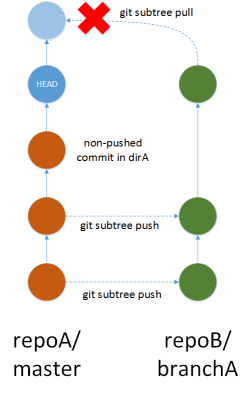 I had a commit in my tree that touched src/dirA, but was not yet pushed when repoB/branchA had already moved on.

I discovered that git subtree pull would not find the right base, because it is looking for a common ancestor, hence it used the version when I had last merged the trees, i.e. when I called git subtree add initially.

Now, to resolve the common ancestor problem, one has to git subtree split --rejoin, which performs a perfunctory merge, so git finds the right base again, i.e. after the commits pushed from repoA to repoB/branchA. 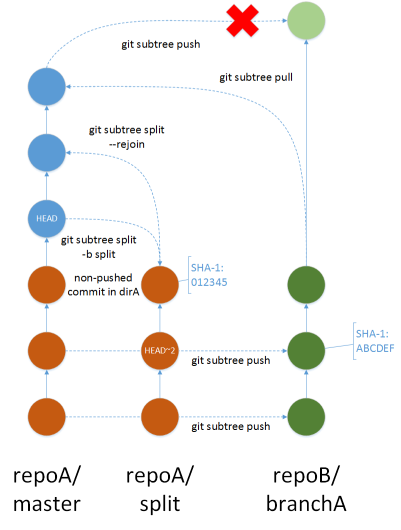 Due to the fact that git subtree split creates a synthetic history of all commit that touch src/dirA irrespective of the fact whether or not they were pushed, the SHA-1 sums diverge. I split the synthetic history into its own branch split for demonstration purposes.

git subtree pull will of course succeed after git subtree split --rejoin. However, the next git subtree push will fail, because the histories of repoB and the synthetic tree are completely different after that.

Therefore, I had to go back before the offending non-pushed commit and pull the changes into my branch from there. This is complicated by the fact that git subtree split --rejoin is still necessary, because git subtree pull via git merge can still not figure out the correct base on its own. 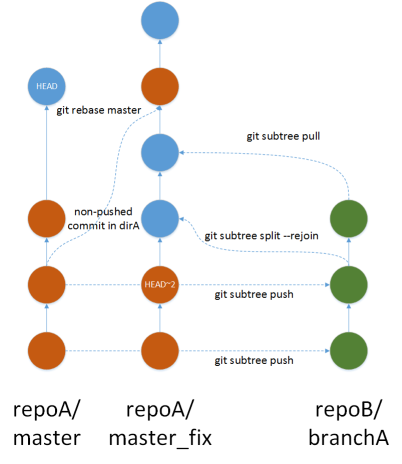 So the way I currently resolved my issue was by checking out the commit directly before the offending non-pushed src/dirA commit. Then I did a git subtree split --rejoin followed by a git subtree pull. This of course adds two merges into my main tree, which I could not figure out how to squash into one merge, and from what I read in source code, there doesn't seem to be an easy solution to that problem.

After the successful git subtree pull, I rebased the remaining commits from my master branch onto master_fix. Now the SHA-1 sums match throughout the shared history of repoA/master_fix and repoB/branchA.

This of course has the usual drawbacks of a rebase: if somebody else was working on master, their history will be ruined by git branch -m master_fix master.

I had a similar problem as git subtree pull would fail with fatal: refusing to merge unrelated histories.

What worked for me was using git merge directly, more specifically: