In plain English, what does “git reset” do?

I have seen interesting posts explaining subtleties about git reset.

Unfortunately, the more I read about it, the more it appears that I don't understand it fully. I come from a SVN background and Git is a whole new paradigm. I got mercurial easily, but Git is much more technical.

I think git reset is close to hg revert, but it seems there are differences.

So what exactly does git reset do? Please include detailed explanations about:

In general, git reset's function is to take the current branch and reset it to point somewhere else, and possibly bring the index and work tree along. More concretely, if your master branch (currently checked out) is like this:

and you realize you want master to point to B, not C, you will use git reset B to move it there:

Digression: This is different from a checkout. If you'd run git checkout B, you'd get this:

You've ended up in a detached HEAD state. HEAD, work tree, index all match B, but the master branch was left behind at C. If you make a new commit D at this point, you'll get this, which is probably not what you want:

Remember, reset doesn't make commits, it just updates a branch (which is a pointer to a commit) to point to a different commit. The rest is just details of what happens to your index and work tree.

I cover many of the main use cases for git reset within my descriptions of the various options in the next section. It can really be used for a wide variety of things; the common thread is that all of them involve resetting the branch, index, and/or work tree to point to/match a given commit.

Things to be careful of

Paraphrasing the man page, most common usage is of the form git reset [<commit>] [paths...], which will reset the given paths to their state from the given commit. If the paths aren't provided, the entire tree is reset, and if the commit isn't provided, it's taken to be HEAD (the current commit). This is a common pattern across git commands (e.g. checkout, diff, log, though the exact semantics vary), so it shouldn't be too surprising.

There are four main options to control what happens to your work tree and index during the reset.

Remember, the index is git's "staging area" - it's where things go when you say git add in preparation to commit.

I do think man git reset is really quite good for this - perhaps you do need a bit of a sense of the way git works for them to really sink in though. In particular, if you take the time to carefully read them, those tables detailing states of files in index and work tree for all the various options and cases are very very helpful. (But yes, they're very dense - they're conveying an awful lot of the above information in a very concise form.)

The "strange notation" (HEAD^ and HEAD~1) you mention is simply a shorthand for specifying commits, without having to use a hash name like 3ebe3f6. It's fully documented in the "specifying revisions" section of the man page for git-rev-parse, with lots of examples and related syntax. The caret and the tilde actually mean different things: 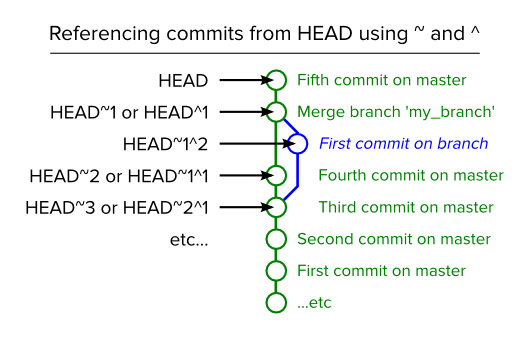 Remember that in git you have:

Please include detailed explanations about:

In increasing order of dangerous-ness:

concrete use cases and workflows;

The post Reset Demystified in the blog Pro Git gives a very no-brainer explanation on git reset and git checkout.

After all the helpful discussion at the top of that post, the author reduces the rules to the following simple three steps:

That is basically it. The reset command overwrites these three trees in a specific order, stopping when you tell it to.

There are also --merge and --keep options, but I would rather keep things simpler for now - that will be for another article.

When you commit something to git you first have to stage (add to the index) your changes. This means you have to git add all the files you want to have included in this commit before git considers them part of the commit. Let's first have a look over the image of a git repo: 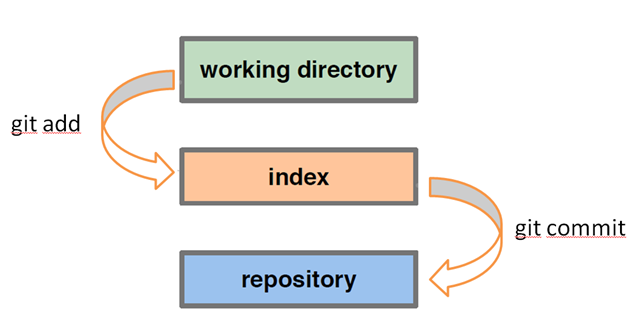 so, its simple now. We have to work in working directory, creating files, directories and all. These changes are untracked changes. To make them tracked, we need to add them to git index by using git add command. Once they are added to git index. We can now commit these changes, if we want to push it to git repository.

But suddenly we came to know while commiting that we have one extra file which we added in index is not required to push in git repository. It means we don't want that file in index. Now the question is how to remove that file from git index, Since we used git add to put them in the index it would be logical to use git rm? Wrong! git rm will simply delete the file and add the deletion to the index. So what to do now:

It Clears your index, leaves your working directory untouched. (simply unstaging everything).

It can be used with number of options with it. There are three main options to use with git reset: --hard, --soft and --mixed. These affect what get’s reset in addition to the HEAD pointer when you reset.

First, --hard resets everything. Your current directory would be exactly as it would if you had been following that branch all along. The working directory and the index are changed to that commit. This is the version that I use most often. git reset --hard is something like svn revert .

Next, the complete opposite, —soft, does not reset the working tree nor the index. It only moves the HEAD pointer. This leaves your current state with any changes different than the commit you are switching to in place in your directory, and “staged” for committing. If you make a commit locally but haven’t pushed the commit to the git server, you can reset to the previous commit, and recommit with a good commit message.

Finally, --mixed resets the index, but not the working tree. So the changes are all still there, but are “unstaged” and would need to be git add’ed or git commit -a. we use this sometimes if we committed more than we meant to with git commit -a, we can back out the commit with git reset --mixed, add the things that we want to commit and just commit those.

It means if we have made some error in some change and commited and pushed the same to git repo, then git revert is the solution. And if in case we have identified the same error before pushing/commiting, we can use git reset to fix the issue.

I hope it will help you to get rid of your confusion.

But that's obviously simplistic hence the many rather verbose answers. It made more sense for me to read up on git reset in the context of undoing changes. E.g. see this:

If git revert is a “safe” way to undo changes, you can think of git reset as the dangerous method. When you undo with git reset(and the commits are no longer referenced by any ref or the reflog), there is no way to retrieve the original copy—it is a permanent undo. Care must be taken when using this tool, as it’s one of the only Git commands that has the potential to lose your work.

On the commit-level, resetting is a way to move the tip of a branch to a different commit. This can be used to remove commits from the current branch.

Checkout points the head at a specific commit.

Reset points a branch at a specific commit. (A branch is a pointer to a commit.)

Incidentally, if your head doesn’t point to a commit that’s also pointed to by a branch then you have a detached head. (turned out to be wrong. See comments...)

Not the answer you're looking for? Browse other questions tagged git reset or ask your own question.

7624
How do I revert a Git repository to a previous commit?
1519
Resolve Git merge conflicts in favor of their changes during a pull
874
What's the difference between git reset --mixed, --soft, and --hard?
1094
How to uncommit my last commit in Git
680
How to un-commit last un-pushed git commit without losing the changes
418
Reverting to a specific commit based on commit id with Git?
302
How can I unstage my files again after making a local commit?
252
What is the HEAD in git?
85
What is difference between “git checkout -f” and “git reset --hard HEAD”?
45
Is there a difference between “git reset --hard hash” and “git checkout hash”?
See more linked questions