For an example and a little more reading, refer to http://www.int80h.org/bsdasm/#alternate-calling-convention. Another example of a Hello World for i386 Linux using int 0x80: Hello, world in assembly language with Linux system calls?

(Note: x86-64 Mac OS X is similar but different from Linux. TODO: check what *BSD does)

For an explicit minimal runnable example from scratch see this answer: How to invoke a system call via syscall or sysenter in inline assembly?

Here's an example with register constraints: How to invoke a system call via syscall or sysenter in inline assembly? 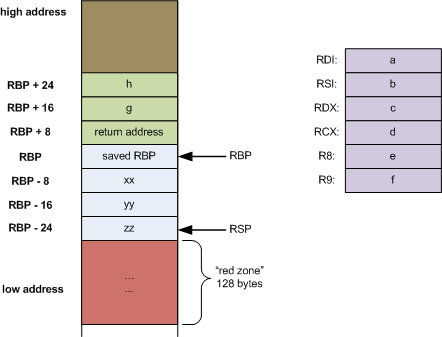 Not the answer you're looking for? Browse other questions tagged linux assembly x86-64 calling-convention abi or ask your own question.

1
reference of syscall in asm
2
How are parameters accepted by standard c functions in assembly?
3
FreeBSD 64bits convention call documentation
0
How to know which integer register to use
1
Passing arguments to ASM functions
0
rax/rdi doesn't carry over to the next syscall?
0
Resource for writing assembly[shellcode]
0
Passing parameters to a function -- push or registers
1
How do you allocate memory on the heap without using libc in linux
-1
How does a low-level OS API work?
See more linked questions

528
What characters are forbidden in Windows and Linux directory names?
712
What is an application binary interface (ABI)?
124
Why does Windows64 use a different calling convention from all other OSes on x86-64?
684
How do I achieve the theoretical maximum of 4 FLOPs per cycle?
1035
Where can I find php.ini?
5
fatal: unable to open include file `system.inc'
1584
Replacing a 32-bit loop counter with 64-bit introduces crazy performance deviations with _mm_popcnt_u64 on Intel CPUs
4
Are Unix/Linux system calls part of POSIX library functions?
63
What happens if you use the 32-bit int 0x80 Linux ABI in 64-bit code?