As mentioned before, the above works fine on server 2003 64-bit and server 2008 64-bit, just not server 2008 R2 64-bit. Steps 2 and 3 give me the error: "Operation failed with 0x8007000B. An attempt was made to load a program with an incorrect format". After some searching, this is something to do with me running 32-bit application (aspnet_regiis) with IIS which is a 64-bit app. Step one has worked, as the flag has been set in the IIS GUI.

Would really appreciate it if someone could tell me where I'm going wrong, and why this doesn't work for 2008 R2.

I know its a late post, but what I ended up having to do was run aspnet_regiis on the Framework64 folder and selecting the "Enable 32-bit Applications" on the application pool I was using and my sites came up.

In Vista and higher OS's ASP.NET is part of the OS and needs to be installed. You can install ASP.NET from the add windows features under Web Server. 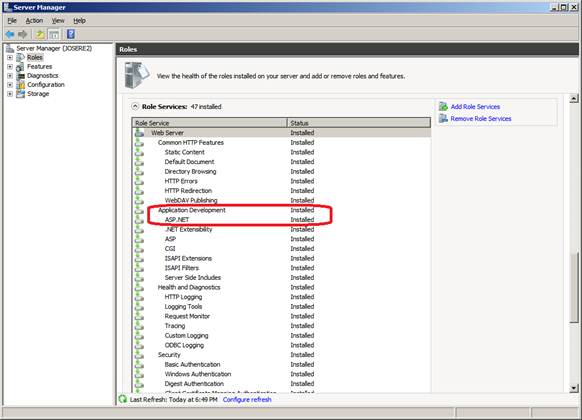 Check for your Windows version. If its a Windows 32 bit try running 'aspnet_regiis -i' from C:\Windows\Microsoft.Net\Framework\v2.0.52707 folder

Not the answer you're looking for? Browse other questions tagged iis 64-bit or ask your own question.

0
ASP.NET cannot connect to 64-bit Sql Server 2008
337
The breakpoint will not currently be hit. No symbols have been loaded for this document in a Silverlight application
414
An ASP.NET setting has been detected that does not apply in Integrated managed pipeline mode
294
What are all the user accounts for IIS/ASP.NET and how do they differ?
232
How to force HTTPS using a web.config file
296
The Web Application Project […] is configured to use IIS. The Web server […] could not be found.
0
Secure way for registering .NET 4.5 on IIS 7.5 on Windows Server 2008 R2 SP1
375
IIS Manager in Windows 10
154
Publish to IIS, setting Environment Variable
179
What is Kestrel (vs IIS / Express)