What are .CSX C# files for?

I've heard of .cs files but never of .csx files. Google searches led me to CSX corporation and other unwanted bodies. Can someone provide a terse description of what a CSX file is, and perhaps the main differences between CSX and CS?

It is a C# Script File introduced with Roslyn:

C# Script File (.csx) Editing Support: The CTP introduces a concept of a C# Script File. You can create a .csx file [...]

[What is Roslyn? .NET Compiler Platform, also known by its nickname Roslyn, is a set of open-source compilers and code analysis APIs for C# and Visual Basic .NET languages from Microsoft.]

You don't have to have everything in a class and method, a csx file is like it's own method, and everything in the file will be executed on start. It also supports some additional directives (like #load to load another script).

The Scripting Api provided in Roslyn, while being promising, has some severe flaws:

There are several scripting engines which are based on it (or on the underneath Roslyn) or at least on the same format, while providing more advanced directives. So, it means a csx file should run on one of the following:

Beware, even if they share a common base, they are not cross-compatible, since there is no standard on the extensions they implement.

For example, you can develop an application entirely from the browser and continuously deploy it from there. Here's an example bot created from the Azure Portal and written in CSX via browser: 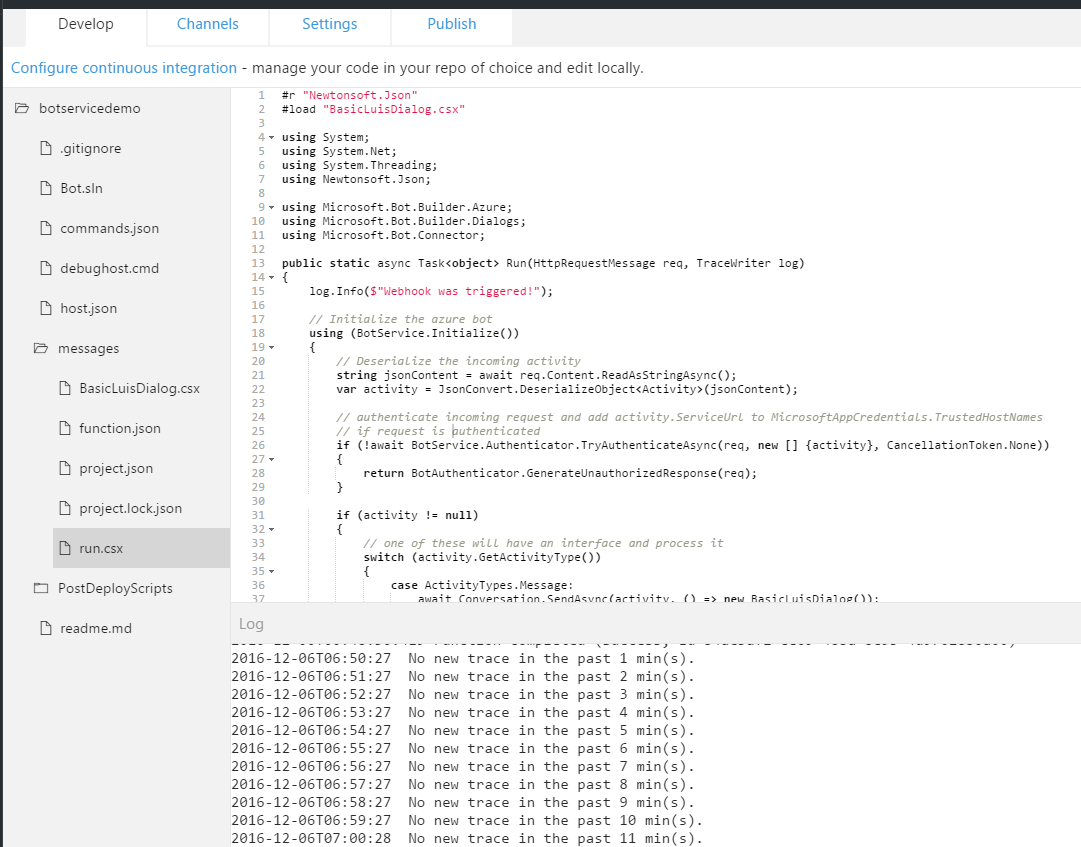 It is a script file used by ScriptCS to allow you to create executables without having to create a project file.

Not the answer you're looking for? Browse other questions tagged c# csx or ask your own question.

6866
What is the difference between String and string in C#?
2046
What is the best way to give a C# auto-property an initial value?
266
How much faster is C++ than C#?
2667
What are the correct version numbers for C#?
1770
What do two question marks together mean in C#?
1161
Difference Between Select and SelectMany
1874
What is a NullReferenceException, and how do I fix it?
1509
Why not inherit from List<T>?