How to find the statistical mode?

In R, mean() and median() are standard functions which do what you'd expect. mode() tells you the internal storage mode of the object, not the value that occurs the most in its argument. But is there is a standard library function that implements the statistical mode for a vector (or list)?

One more solution, which works for both numeric & character/factor data:

On my dinky little machine, that can generate & find the mode of a 10M-integer vector in about half a second.

If your data set might have multiple modes, the above solution takes the same approach as which.max, and returns the first-appearing value of the set of modes. To return all modes, use this variant (from @digEmAll in the comments):

There is package modeest which provide estimators of the mode of univariate unimodal (and sometimes multimodal) data and values of the modes of usual probability distributions.

For more information see this page

found this on the r mailing list, hope it's helpful. It is also what I was thinking anyways. You'll want to table() the data, sort and then pick the first name. It's hackish but should work.

I found Ken Williams post above to be great, I added a few lines to account for NA values and made it a function for ease.

A quick and dirty way of estimating the mode of a vector of numbers you believe come from a continous univariate distribution (e.g. a normal distribution) is defining and using the following function:

Then to get the mode estimate:

I can't vote yet but Rasmus Bååth's answer is what I was looking for. However, I would modify it a bit allowing to contrain the distribution for example fro values only between 0 and 1.

We aware that you may not want to constrain at all your distribution, then set from=-"BIG NUMBER", to="BIG NUMBER"

Unlike the answers relying on names(), this answer maintains the data type of x in the returned value(s).

To show it works with the optional params and maintains data type:

Thanks to @Frank for simplification.

I've written the following code in order to generate the mode.

Based on @Chris's function to calculate the mode or related metrics, however using Ken Williams's method to calculate frequencies. This one provides a fix for the case of no modes at all (all elements equally frequent), and some more readable method names.

Since it uses Ken's method to calculate frequencies the performance is also optimised, using AkselA's post I benchmarked some of the previous answers as to show how my function is close to Ken's in performance, with the conditionals for the various ouput options causing only minor overhead: 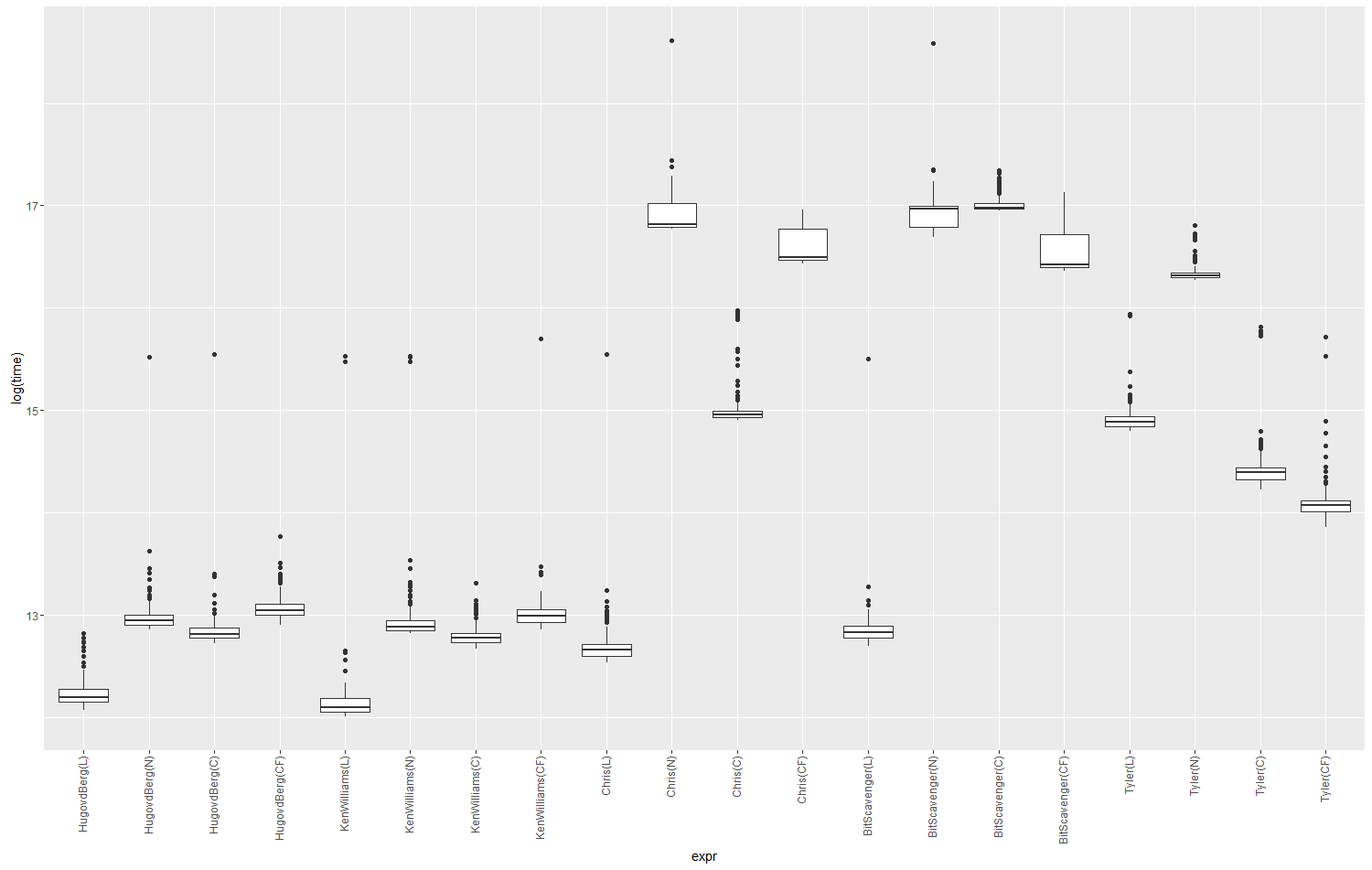 This hack should work fine. Gives you the value as well as the count of mode:

R has so many add-on packages that some of them may well provide the [statistical] mode of a numeric list/series/vector.

However the standard library of R itself doesn't seem to have such a built-in method! One way to work around this is to use some construct like the following (and to turn this to a function if you use often...):

For bigger sample list, one should consider using a temporary variable for the max(tabSmpl) value (I don't know that R would automatically optimize this)

Reference: see "How about median and mode?" in this KickStarting R lesson
This seems to confirm that (at least as of the writing of this lesson) there isn't a mode function in R (well... mode() as you found out is used for asserting the type of variables).

Here is a function to find the mode:

Below is the code which can be use to find the mode of a vector variable in R.

There are multiple solutions provided for this one. I checked the first one and after that wrote my own. Posting it here if it helps anyone:

Lets test it with a few example. I am taking the iris data set. Lets test with numeric data

which you can verify is correct.

Now the only non numeric field in the iris dataset(Species) does not have a mode. Let's test with our own example

As mentioned in the comments, user might want to preserve the input type. In which case the mode function can be modified to:

The last line of the function simply coerces the final mode value to the type of the original input.

Another simple option that gives all values ordered by frequency is to use rle:

I would use the density() function to identify a smoothed maximum of a (possibly continuous) distribution :

where x is the data collection. Pay attention to the adjust paremeter of the density function which regulate the smoothing.

While I like Ken Williams simple function, I would like to retrieve the multiple modes if they exist. With that in mind, I use the following function which returns a list of the modes if multiple or the single.

I was looking through all these options and started to wonder about their relative features and performances, so I did some tests. In case anyone else are curious about the same, I'm sharing my results here.

Not wanting to bother about all the functions posted here, I chose to focus on a sample based on a few criteria: the function should work on both character, factor, logical and numeric vectors, it should deal with NAs and other problematic values appropriately, and output should be 'sensible', i.e. no numerics as character or other such silliness.

I also added a function of my own, which is based on the same rle idea as chrispy's, except adapted for more general use:

I ended up running five functions, on two sets of test data, through microbenchmark. The function names refer to their respective authors:

Chris' function was set to method="modes" and na.rm=TRUE by default to make it more comparable, but other than that the functions were used as presented here by their authors.

In matter of speed alone Kens version wins handily, but it is also the only one of these that will only report one mode, no matter how many there really are. As is often the case, there's a trade-off between speed and versatility. In method="mode", Chris' version will return a value iff there is one mode, else NA. I think that's a nice touch. I also think it's interesting how some of the functions are affected by an increased number of unique values, while others aren't nearly as much. I haven't studied the code in detail to figure out why that is, apart from eliminating logical/numeric as a the cause.

Mode can't be useful in every situations. So the function should address this situation. Try the following function.

This builds on jprockbelly's answer, by adding a speed up for very short vectors. This is useful when applying mode to a data.frame or datatable with lots of small groups:

The generic function fmode in the collapse package now available on CRAN implements a C++ based mode based on index hashing. It is significantly faster than any of the above approaches. It comes with methods for vectors, matrices, data.frames and dplyr grouped tibbles. Syntax:

where x can be one of the above objects, g supplies an optional grouping vector or list of grouping vectors (for grouped mode calculations, also performed in C++), and w (optionally) supplies a numeric weight vector. In the grouped tibble method, there is no g argument, you can do data %>% group_by(idvar) %>% fmode.

Could try the following function:

it will give max label value. it is easier to use by inbuilt functions itself without writing function.

It seems to me that if a collection has a mode, then its elements can be mapped one-to-one with the natural numbers. So, the problem of finding the mode reduces to producing such a mapping, finding the mode of the mapped values, then mapping back to some of the items in the collection. (Dealing with NA occurs at the mapping phase).

I have a histogram function that operates on a similar principal. (The special functions and operators used in the code presented herein should be defined in Shapiro and/or the neatOveRse. The portions of Shapiro and neatOveRse duplicated herein are so duplicated with permission; the duplicated snippets may be used under the terms of this site.) R pseudocode for histogram is

(The special binary operators accomplish piping, currying, and composition) I also have a maxloc function, which is similar to which.max, but returns all the absolute maxima of a vector. R pseudocode for maxloc is

will compute the mode of any collection, provided appropriate map-ping and unmap-ping functions are defined.

Adding in raster::modal() as an option, although note that raster is a hefty package and may not be worth installing if you don't do geospatial work.

Not the answer you're looking for? Browse other questions tagged r statistics r-faq or ask your own question.

9
Most frequent value (mode) by group
6
To find “row wise” “Mode” of a given data in R
2
Find row name of a Table given max value
0
calculate mode in R wrt other column
0
How to Retrieve the value Mode
0
R: how to find the mode of a vector
0
Finding a single mode for the data
0
Calculate mode in R
1
How to find mode of a column values for another column in R?
-1
R: count the number of occurrences
See more linked questions

87
“On-line” (iterator) algorithms for estimating statistical median, mode, skewness, kurtosis?
569
Drop unused factor levels in a subsetted data frame
1392
How to sort a dataframe by multiple column(s)
1354
How to join (merge) data frames (inner, outer, left, right)
802
What are the differences between “=” and “<-” assignment operators in R?
1086
Grouping functions (tapply, by, aggregate) and the *apply family
2469
How to make a great R reproducible example
417
Why is `[` better than `subset`?
605
How can I view the source code for a function?
814
data.table vs dplyr: can one do something well the other can't or does poorly?