Has the Pro Git book got the syntax of git-rebase backwards?

Just as the title illustrates. I recently tried to run a git rebase command that had the reverse effect from what the Git pro's section on rebasing had. Maybe I interpreted it wrong, but its driving me crazy because what I thought was supposed to happen failed and I need to know what went wrong.

The section that I refer to is under More Interesting Rebases, particularly with the example when you rebase the server work branch onto the master branch. Git Rebasing. 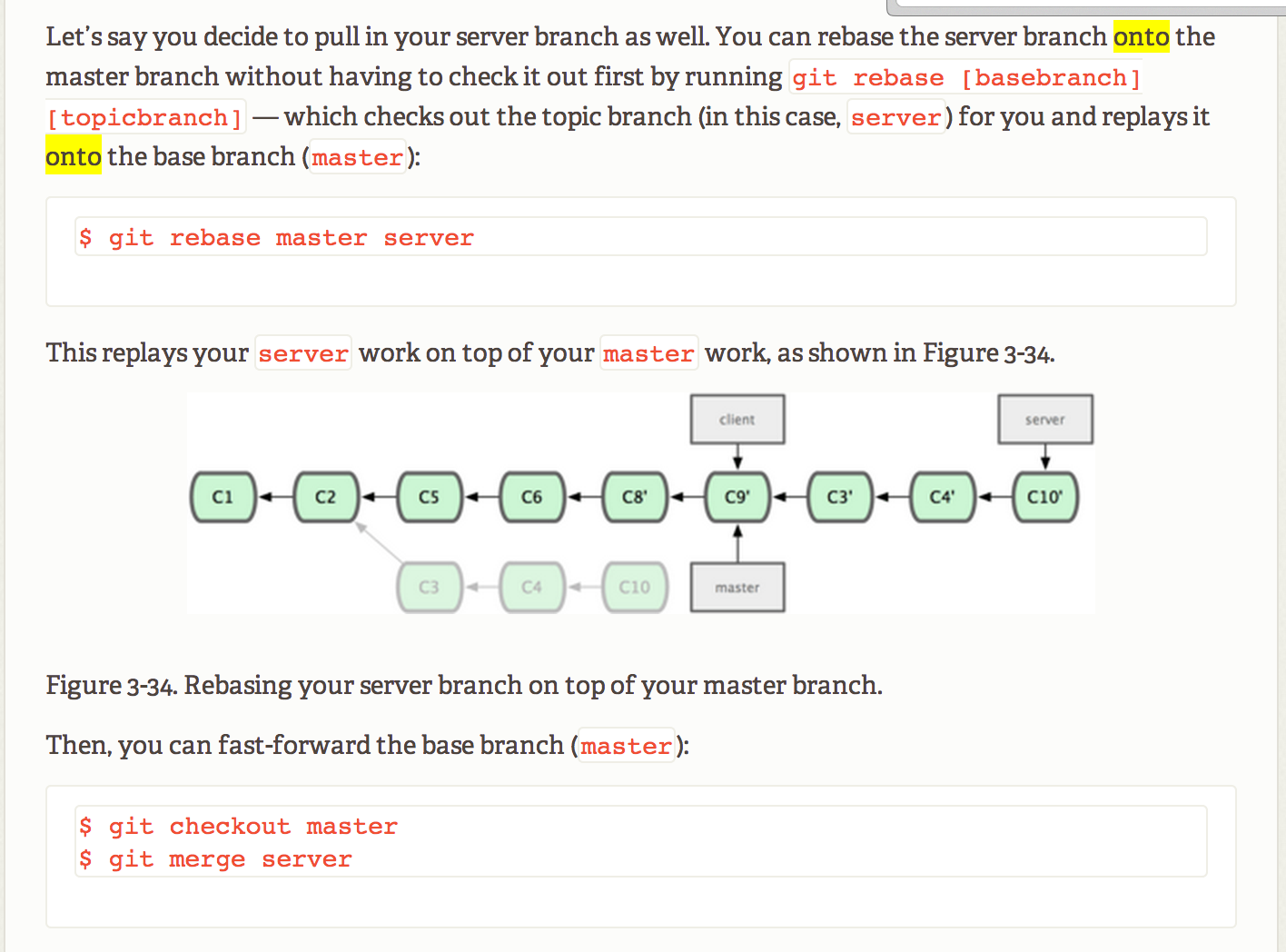 The way how I interpreted was that the server work would be pasted on top of the master work, which is clearly what it happening based on the illustration.

This command however worked:

This placed the work of origin/orgs_phase_2 onto OTWO-3196.

Did I interpret the command wrong? Is the book incorrect? What exactly happened? An extra pair of eyes would be helpful. Thanks.

I don't know what you did, or think you did, but origin/orgs_phase_2 is a remote-tracking branch. Its only purpose is to indicate where the branch reference called orgs_phase_2 pointed to in the remote repo called origin the last time you communicated with the latter. The only way such a reference can move is via a fetch or a push. In particular, you can't rebase a remote-tracking branch.

Besides, the Pro Git book is correct. You have got the git-rebase syntax backwards. Git's rebase works as advertised in that book,

and in the git-rebase man page,

Assume the following history exists and the current branch is "topic":

From this point, the result of either of the following commands:

To fix ideas, here is a baby example that you can reproduce at home:

At this stage, the output of

Here is a nicer-looking graph showing the same history: 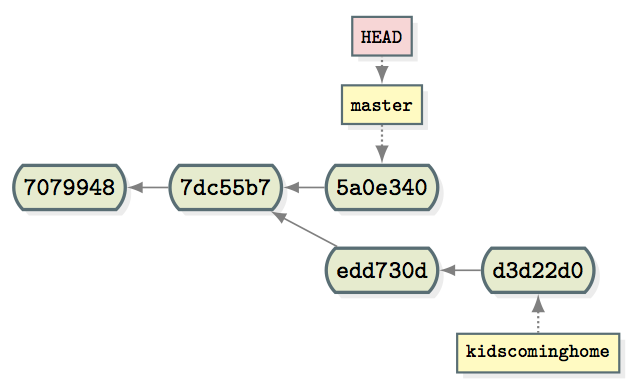 Now, if you run

and then run the same git log command, you should see

Again, here is a nicer-looking graph showing the same history:

As advertised, the kidscominghome branch has been checked out, and the commits that were only reachable from kidcominghome have been replayed on top of master; not the other way around!

18
What are typical use cases of git-reset's --merge and --keep flags?

7387
How to remove local (untracked) files from the current Git working tree
3618
Undoing a git rebase
12770
What is the difference between 'git pull' and 'git fetch'?
1012
Git workflow and rebase vs merge questions
23182
How do I undo the most recent local commits in Git?
5665
Move the most recent commit(s) to a new branch with Git
1659
How can I reconcile detached HEAD with master/origin?
3170
How to get the current branch name in Git?
1113
Git push rejected after feature branch rebase
1414
Can I delete a git commit but keep the changes?