I have a .rep File, I think it ist a file created with Visual Studio and Business Report.

There are no SQL Queries in the File. I looked with notepad. But how can I open it? I download the Report Viewer from Microsoft, but there is no exe-File to start it.

Have someone of you an Idea?

Without to install Visual Studio

.rep is a common extension for a BusinessObjects Full Client document (later renamed to Desktop Intelligence).

Having checked a .rep file I still had, the HEX signature didn't match. This may be due to the XI releases of Desktop Intelligence using the same extension but a different implementation. The newer format seems to be a ZIP file. Try renaming the file from .rep to .zip and see if you can open the file then (or open the .rep file in a text viewer; the first 2 characters should be PK).

Here's a screenshot of my .rep file opened as a ZIP archive: 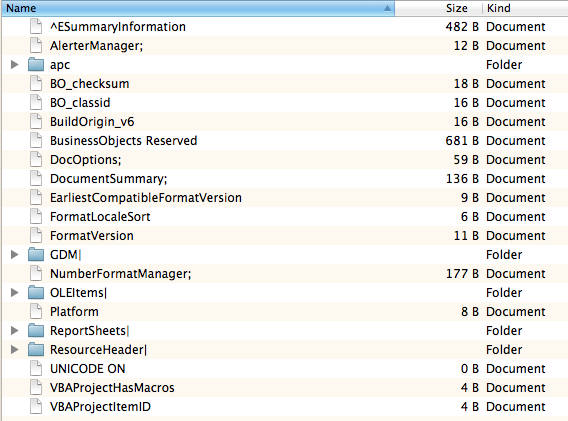 The rest of this post will assume it actually is a BusinessObject document.

This is where things get tricky. Usually, such documents belong to a repository, which defines authorisations, thus preventing individual documents being sent around and opened by someone who doesn't have the necessary rights to do so.

If the document wasn't saved with all security settings removed (known as Save for all users), I'm afraid you won't be able to open it.

If it was (thus the file has no security defined on it), you'll still need a corresponding version of BusinessObjects Full Client / Desktop Intelligence to open the file. This application is part of the SAP BusinessObjects BI suite. The latest version that contains DeskI (as it's end-of-life currently) is SAP BusinessObjects XI 3.1. I doubt you'll be able to download a trial of this version, as it's already quite old.

Getting the SQL queries

BusinessObjects documents are usually (not always) based on a Universe: a semantic abstraction layer that generates SQL queries depending on the objects selected by the report author. In short: you won't be able to retrieve the SQL statement without the underlying universe.

Not the answer you're looking for? Browse other questions tagged visual-studio reportviewer business-objects or ask your own question.