What is the precise meaning of "ours" and "theirs" in git?

This might sound like too basic of a question, but I have searched for answers and I am more confused now than before.

What does "ours" and "theirs" mean in git when merging my branch into my other branch? Both branches are "ours".

In a merge conflict is "ours" always the upper of the two versions displayed?

Does "ours" always refer to the branch that HEAD was pointing to when the merge began? If so then why not use a clear possessive reference like "current branch's" instead of using a possessive pronoun like "ours" that is referentially ambiguous (since both branches are technically ours)?

Or just use the branch name (instead of saying "ours" just say "local master's" or such)?

I suspect you're confused here because it's fundamentally confusing. To make things worse, the whole ours/theirs stuff switches roles (becomes backwards) when you are doing a rebase.

Ultimately, during a git merge, the "ours" branch refers to the branch you're merging into:

and the "theirs" branch refers to the (single) branch you're merging:

and here "ours" and "theirs" makes some sense, as even though "theirs" is probably yours anyway, "theirs" is not the one you were on when you ran git merge.

While using the actual branch name might be pretty cool, it falls apart in more complex cases. For instance, instead of the above, you might do:

where you're merging by raw commit-ID. Worse, you can even do this:

in which case there are no branch names involved!

I think it's little help here, but in fact, in gitrevisions syntax, you can refer to an individual path in the index by number, during a conflicted merge

Stage #1 is the common ancestor of the files, stage #2 is the target-branch version, and stage #3 is the version you are merging from.

As for the gitattributes entry: it could have an effect: "ours" really means "use stage #2" internally. But as you note, it's not actually in place at the time, so it should not have an effect here ... well, not unless you copy it into the work tree before you start.

Also, by the way, this applies to all uses of ours and theirs, but some are on a whole file level (-s ours for a merge strategy; git checkout --ours during a merge conflict) and some are on a piece-by-piece basis (-X ours or -X theirs during a -s recursive merge). Which probably does not help with any of the confusion.

I've never come up with a better name for these, though. And: see VonC's answer to another question, where git mergetool introduces yet more names for these, calling them "local" and "remote"!

I know this has been answered, but this issue confused me so many times I've put up a small reference website to help me remember: https://nitaym.github.io/ourstheirs/

Here are the basics:

(This is for complete files, of course)

The 'ours' in Git is referring to the original working branch which has authoritative/canonical part of git history.

The 'theirs' refers to the version that holds the work in order to be rebased (changes to be replayed onto the current branch).

This may appear to be swapped to people who are not aware that doing rebasing (e.g. git rebase) is actually taking your work on hold (which is theirs) in order to replay onto the canonical/main history which is ours, because we're rebasing our changes as third-party work.

The documentation for git-checkout was further clarified in Git >=2.5.1 as per f303016 commit:

When checking out paths from the index, check out stage #2 ('ours') or #3 ('theirs') for unmerged paths.

For git-merge it's explain in the following way:

This option forces conflicting hunks to be auto-resolved cleanly by favoring our version. Changes from the other tree that do not conflict with our side are reflected to the merge result. For a binary file, the entire contents are taken from our side.

This should not be confused with the ours merge strategy, which does not even look at what the other tree contains at all. It discards everything the other tree did, declaring our history contains all that happened in it.

This is the opposite of ours.

Further more, here is explained how to use them:

The merge mechanism (git merge and git pull commands) allows the backend merge strategies to be chosen with -s option. Some strategies can also take their own options, which can be passed by giving -X<option> arguments to git merge and/or git pull.

So sometimes it can be confusing, for example:

So the 2nd example is opposite to the 1st one, because we're rebasing our branch on top of the remote one, so our starting point is remote one, and our changes are treated as external.

Similar for git merge strategies (-X ours and -X theirs).

I know it doesn't explain the meaning but I've made myself a little image, as reference to remind which one to use: 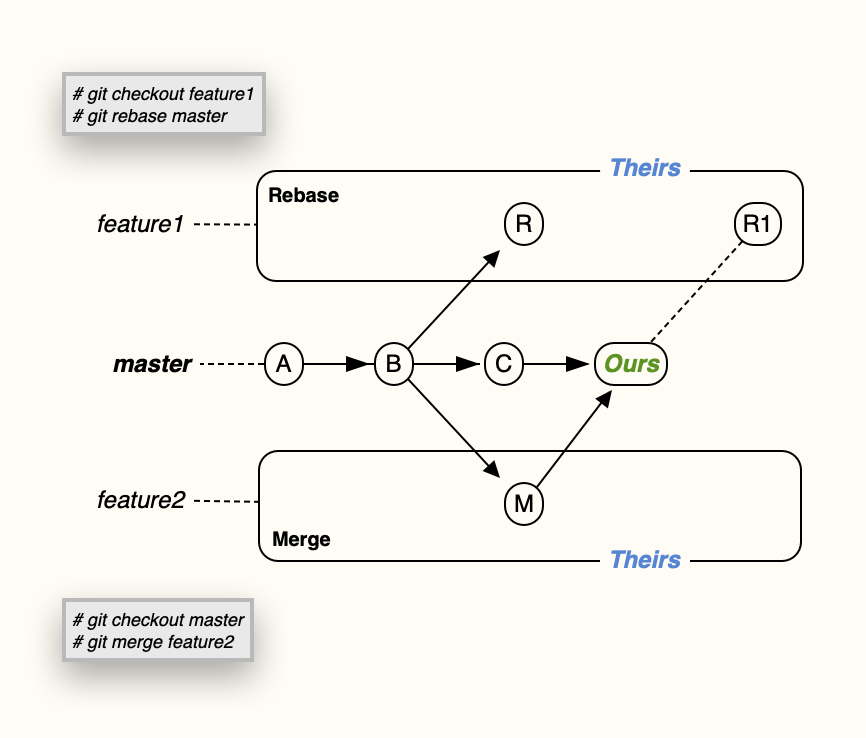 PS - Give a check also to the link in Nitay's answer 🙂

The only problem most people fall for is the rebase case. If you do a re-base instead of a normal merge, the roles are swapped. How's that? Well, that's caused solely by the way rebasing works. Think of rebase to work like that:

Of course, that's not really what is going on but it's a nice mind model for me. And if you look at 2 and 3, you will understand why the roles are swapped now. As of 2, your current branch is now the branch from the server without any of your changes, so this is ours (the branch you are on). The changes you made are now on a different branch that is not your current one (BranchX) and thus these changes (despite being the changes you made) are theirs (the other branch used in your action).

I'll post my memo here, because I have to come back here again and again.

SCENARIO 1. Normal developer: You are developer who can't merge to master and have to play with feature branches only.

Case 1: master is a king. You want to refresh your feature branch (= rebase to master), because master contains new updates of dependencies and you want to overwrite your modest changes.

Case 2: you are a king. You want to rebase your feature branch to master changes. But you did more than your colleagues had and want to use your own changes in a priority.

IMPORTANT: As you can see normal developers should prefer rebase and repeat it every morning like exercises/coffee.

SCENARIO 2. Merging-sensei: You are a team-lead and want to merge other branches and push a merged result directly to a master. master is a branch you will change.

Case 1: master is a king You want to merge third-party branch, but master is a priority. feature is a branch that your senior did.

Case 2: new changes is a king When your senior developer released a cool feature and you want to overwrite the old s**t in the master branch.

REMEMBER: To remember in a midnight which one to choose: master is ours ALWAYS. And theirs is a feature that theirs have done.

Just to clarify -- as noted above when rebasing the sense is reversed, so if you see

There is no precise meaning, precisely because these terms mean the opposite things depending on whether you are merging or rebasing. THE natural way of thinking about two branches is "my work" and "someone else's work". The choice of terminology that obscures this classification is absolutely THE worst design choice in git. It must have been inspired by accounting's "credit" and "debit" or "assets" and "liabilities" - same headache.

11
I am little bit confuse with Source tree resolve Conflicts: Resolve Using Mine and Resolve Using Theirs
5145
How to resolve merge conflicts in a Git repository?
190
git rebase, keeping track of 'local' and 'remote'
201
Who is "us" and who is "them" according to Git?
95
Why is the meaning of “ours” and “theirs” reversed with git-svn
72
Git Rebase Conflict: Who is HEAD?
52
Can TortoiseMerge be used as a difftool with Windows Git Bash?
21
Confused by git checkout
10
What is "ours" and "their" while doing git rebase
3
Git stash apply did not return working directory?
See more linked questions

7529
How to remove local (untracked) files from the current Git working tree
3474
View the change history of a file using Git versioning
12989
What is the difference between 'git pull' and 'git fetch'?
3233
Difference between "git add -A" and "git add ."
23783
How do I undo the most recent local commits in Git?
5821
Move the most recent commit(s) to a new branch with Git
18843
How do I delete a Git branch locally and remotely?
5083
How to change the URI (URL) for a remote Git repository?
5041
How do I push a new local branch to a remote Git repository and track it too?
4779
How can I determine the URL that a local Git repository was originally cloned from?