Why do I divide Z by W in a perspective projection in OpenGL?

I guess this is more a math question than it is an OpenGL one, but I digress. Anyways, if the whole purpose of the perspective divide is to get usable x and y coordinates, why bother dividing z by w? Also how do I get w in the first place?

Actually, the explanation has much more to do with the limitations of the depth buffer than it does math.

At its simplest, "the depth buffer is a texture in which each on-screen pixel is assigned a grayscale value depending on its distance from the camera. This allows visual effects to easily alter with distance." Source

More accurately, a depth buffer is a texture containing the value of z/w for each fragment, where: 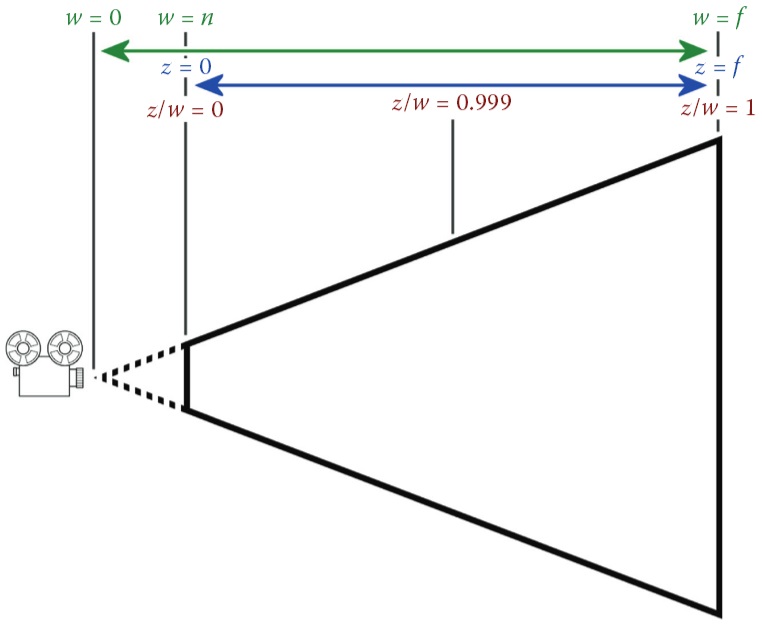 At a glance, this system look unintuitive. But as a result, z/w is always a floating-point value between 0 and 1 (0/n and f/f), and can therefore be represented as a single channel of a texture.

Not the answer you're looking for? Browse other questions tagged c++ opengl math matrix or ask your own question.

2036
Why can templates only be implemented in the header file?
3049
Why is "using namespace std;" considered bad practice?
1225
Easy interview question got harder: given numbers 1..100, find the missing number(s) given exactly k are missing
2320
What are the basic rules and idioms for operator overloading?
2365
Why are elementwise additions much faster in separate loops than in a combined loop?
2060
Why is reading lines from stdin much slower in C++ than Python?
1794
Image Processing: Algorithm Improvement for 'Coca-Cola Can' Recognition
26158
Why is processing a sorted array faster than processing an unsorted array?
1780
Why should I use a pointer rather than the object itself?
1549
Replacing a 32-bit loop counter with 64-bit introduces crazy performance deviations with _mm_popcnt_u64 on Intel CPUs