Non-static variable cannot be referenced from a static context

But it gives the following error:

How do I get my methods to recognize my class variables?

You must understand the difference between a class and an instance of that class. If you see a car on the street, you know immediately that it's a car even if you can't see which model or type. This is because you compare what you see with the class "car". The class contains which is similar to all cars. Think of it as a template or an idea.

At the same time, the car you see is an instance of the class "car" since it has all the properties which you expect: There is someone driving it, it has an engine, wheels.

So the class says "all cars have a color" and the instance says "this specific car is red".

Static fields and methods are shared with all instances. They are for values which are specific to the class and not a specific instance. For methods, this usually are global helper methods (like Integer.parseInt()). For fields, it's usually constants (like car types, i.e. something where you have a limited set which doesn't change often).

To solve your problem, you need to instantiate an instance (create an object) of your class so the runtime can reserve memory for the instance (otherwise, different instances would overwrite each other which you don't want).

In your case, try this code as a starting block:

The new main() method creates an instance of the class it contains (sounds strange but since main() is created with the class instead of with the instance, it can do this) and then calls an instance method (run()).

Static fields and methods are connected to the class itself and not to its instances. If you have a class A, a 'normal' (usually called instance) method b, and a static method c, and you make an instance a of your class A, the calls to A.c() and a.b() are valid. Method c() has no idea which instance is connected, so it cannot use non-static fields.

The solution for you is that you either make your fields static or your methods non-static. Your main could look like this then:

The lifecycle of a class, in broad terms, is:

In order to have an initial entry point for an application, Java has adopted the convention that the Java program must have a class that contains a method with an agreed upon or special name. This special method is called main(). Since the method must exist whether the class containing the main method has been instantiated or not, the main() method must be declared with the static modifier so that as soon as the class is loaded, the main() method is available.

So you need to create an instance of your class as an object and then you can access the methods and variables of the class that have not been declared with the static modifier. Once your Java program has started with the main() function you can then use any variables or methods that have the modifier of static since they exist as part of the class being loaded.

To be able to access them from your static methods they need to be static member variables, like this:

Let's analyze your program first.. In your program, your first method is main(), and keep it in mind it is the static method... Then you declare the local variable for that method (compareCount, low, high, etc..). The scope of this variable is only the declared method, regardless of it being a static or non static method. So you can't use those variables outside that method. This is the basic error u made.

Then we come to next point. You told static is killing you. (It may be killing you but it only gives life to your program!!) First you must understand the basic thing. *Static method calls only the static method and use only the static variable. *Static variable or static method are not dependent on any instance of that class. (i.e. If you change any state of the static variable it will reflect in all objects of the class) *Because of this you call it as a class variable or a class method. And a lot more is there about the "static" keyword. I hope now you get the idea. First change the scope of the variable and declare it as a static (to be able to use it in static methods).

And the advice for you is: you misunderstood the idea of the scope of the variables and static functionalities. Get clear idea about that.

The very basic thing is static variables or static methods are at class level. Class level variables or methods gets loaded prior to instance level methods or variables.And obviously the thing which is not loaded can not be used. So java compiler not letting the things to be handled at run time resolves at compile time. That's why it is giving you error non-static things can not be referred from static context. You just need to read about Class Level Scope, Instance Level Scope and Local Scope.

Now you can add/use instances with in the method

E.g. Say, car has the property colour, and exhibits the behaviour 'motion'. An instance of the car would be a Red Volkswagen Beetle in motion at 25kmph.

Now a static property of the car would be the number of wheels (4) on the road, and this would apply to all cars.

Static variables are marked as static and instance variables doesn't have specific keyword.

It is ClassLoader responsible to load the class files.Let's see what happens when we write our own classes.

Now we can see that class "StaticTest" has 3 fields.But actually there is no existence of b,c member variable.But why ???. OK Lest's see. Here b,c are instance variable.Since instance variable gets the memory at the time of object creation. So here b,c are not getting any memory yet. That's why there is no existence of b,c. So There is only existence of a. For ClassLoader it has only one information about a. ClassLoader yet not recognize b,c because it's object not instantiated yet.

Now if we try to compile this code compiler will give CE error. CE: non-static method display() cannot be referenced from a static context.

In Example 2 CE error is because we call non static method from a static context. So it is not possible for ClassLoader to recognize method display() at compile time.So compile time error is occurred.

This is bit diff to explain about static key word for all beginners.
You wil get to know it clearly when you work more with Classes and Objects.

This is because NamFnc and println wil be declared using key word static before them.

|*| Non Static :Non Static items can be called with Class Variable
If its not static, you need a variable of the class,
put dot after the class variable and
then call function.

Below code explains you neatly

In the Java programming language, the keyword static indicates that the particular member belongs to a type itself, rather than to an instance of that type.

This means that only one instance of that static member is created which is shared across all instances of the class.

So if you want to use your int count = 0; in static void main() , count variable must be declared as static

In this Program you want to use count, so declare count method as a static

Hear you can declare this method as a public private and protected also. If you are using this method you can create a secure application.

you can easily fix this see below images

without making instance of class 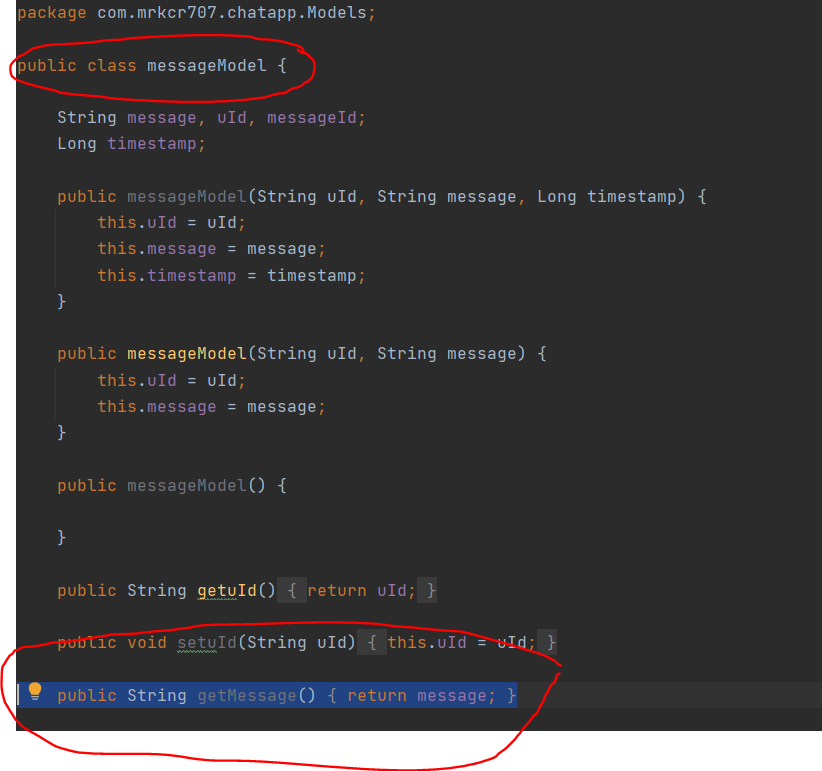