structure padding - what is the purpose of natural alignment? [duplicate]

I was learning about structure padding and data alignment. I came about this point that all the elements of the structure in the memory should be in natural alignment. so for example if I have following structure declared:

all these shall be fetched with minimum machine cycles.

why is it that we need this natural alignment for double when we could save 4bits while going with method 1 (while fetching each element with same no. of machine cycles in both cases) ?

The Pentium 4 is a 32-bit processor, part of the IA-32 family, yet it has a 64-bit data path (Front Side Bus). There are 32-bit processors that have only 16-bit buses, see 32-bit computing historical perspective. Accessing a variable at an alignment other than its natural alignment may result in a performance penalty, or an alignment fault, depending on the processor, in some cases the setting of a control bit, the type of variable, the instruction used, etc.

The actual alignment is up to the compiler and the calling conventions. For structures the requirement is that the first member variable must be at offset 0 (zero) and variables must be allocated in the order they are declared, padding may be inserted between variables for alignment and after the last variable to pad the size of the structure. In 32-bit Windows the stack is only required to be 4-byte aligned, so the compiler would have to generate extra code to ensure 8-byte alignment of a double allocated on the stack.

In Agner Fog's Calling Conventions document you will find details on the alignment used in different operating systems and by different compilers. The stack has a 4-byte alignment in 32-bit Windows, which explains why you may have observed a floating point double aligned at a 4-byte but not 8-byte boundary when allocated on the stack - the compiler doesn't have a clue when a function gets called whether the stack will be 8-byte aligned or not. In table-2 of that document it shows the alignment of various data types allocated in static storage as implemented by various compilers, you will notice that in 32-bit Windows the only compiler that allows 4-byte alignment for double is the Borland compiler. 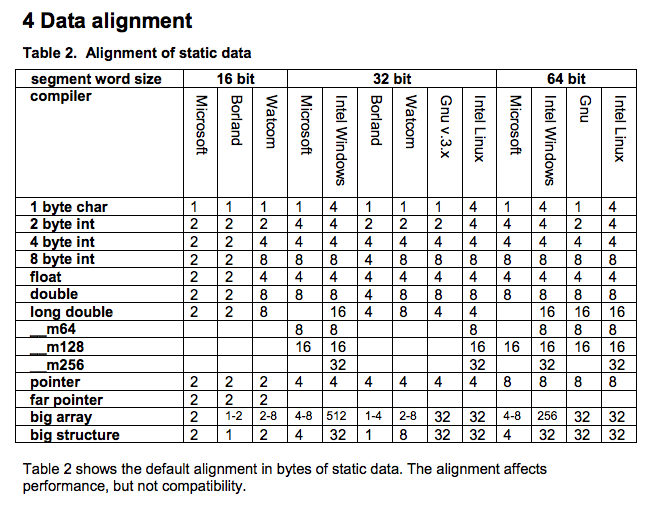 When allocating in a structure according to that document the Borland compiler allows double to be at any byte offset (which I find surprising). 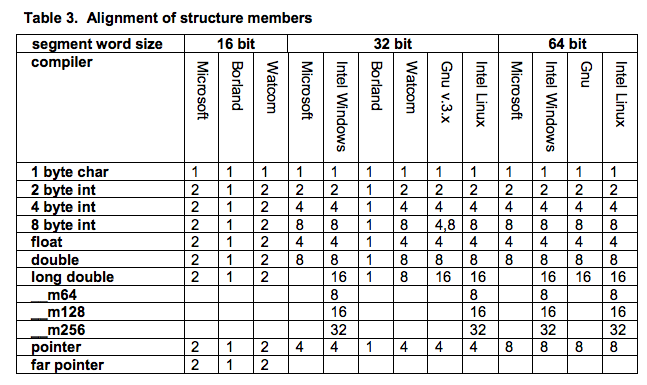 Here's the text description in the document, copied here for reference

Table 3 shows the alignment in bytes of data members of structures and classes. The compiler will insert unused bytes, as required, between members to obtain this alignment. The compiler will also insert unused bytes at the end of the structure so that the total size of the structure is a multiple of the alignment of the element that requires the highest alignment. Many compilers have options to change the default alignments. Differences in structure member alignment will cause incompatibility between different programs or modules accessing the same data and when data are stored in binary files. The programmer can avoid such compatibility problems by ordering the structure members so that no unused bytes need to be inserted. Likewise, the padding at the end of the structure may be specified explicitly by inserting dummy members of the required size. The size of the virtual table pointer, if any, must be taken into account (see chapter 11).

The stack pointer must be aligned by the stack word size at all times. Some systems require a higher alignment. The Gnu compiler version 3.x and later for 32-bit Linux and Mac OS X makes the stack pointer aligned by 16 at every function call instruction. Consequently it can rely on ESP = 12 modulo 16 at every function entry. This alignment is not consistently implemented. It is specified in the Mac OS ABI, but nowhere else. The stack is not aligned when compiling with option -Os or -mpreferred-stack-boundary=2, but apparently the Gnu compiler erroneously relies on the stack being aligned by 16 despite these options. The Intel compiler (v. 9.1.038) for 32 bit Linux does not have the same alignment. (I have submitted bug reports to Gnu and Intel about this in 2006. In 2009 Intel added a -falign-stack= assume-16-byte option to ICC version 11.0 to fix the problem). The stack is aligned by 4 in 32-bit Windows. The 64 bit systems keep the stack aligned by 16. The stack word size is 8 bytes, but the stack must be aligned by 16 before any call instruction. Consequently, the value of the stack 10 pointer is always 8 modulo 16 at the entry of a procedure. A procedure must subtract an odd multiple of 8 from the stack pointer before any call instruction. A procedure can rely on these rules when storing XMM data that require 16-byte alignment. This applies to all 64 bit systems (Windows, Linux, BSD). Where at least one function parameter of type __m256 is transferred on the stack, Unix systems (32 and 64 bit) align the parameter by 32 and the called function can rely on the stack being aligned by 32 before the call (i.e. the stack pointer is 32 minus the word size modulo 32 at the function entry). This does not apply if the parameter is transferred in a register. Various methods for aligning the stack are described in Intel's application note AP 589 "Software Conventions for Streaming SIMD Extensions", "Data Alignment and Programming Issues for the Streaming SIMD Extensions with the Intel® C/C++ Compiler", and "IA-32 Intel ® Architecture Optimization Reference Manual".

Your comment is valid, and you'll probably get the result you are looking for if, instead of using a struct, you simply lay down the variables as part of the local stack inside a function. Something along these lines :

In this example, the compiler is free to make its optimal choices performance and memory wise. Heck, it can even re-order variables if it wishes. On this setup, I've already witnessed double on 4-bytes boundaries (not 8) using 32-bits compilers.

On the other hand, using a struct, you need to keep in mind that it is part of an interface contract. It's not just a matter of the compiler selecting whatever choice it feels better : if part of an API, this struct will be used by other programs, potentially using another compiler, or another version of the same compiler. It happens all the time : think DLL, wrapper from other languages (calling a C function from a Delphi or Python program) etc.

You can't have an interface element in a "random state", with different choices depending on compiler. In this case, the allocation rules regarding variables inside a struct are set in stone by the specification.

In this specification, variable order is always respected, and double are aligned on 8 bytes.

Not the answer you're looking for? Browse other questions tagged c caching structure padding memory-alignment or ask your own question.

40
Padding in structures in C