Where does Android Studio save the ProGuard mapping file?

In Android Studio, where are the ProGuard mapping files generated after compiling a signed APK?

I'm not sure if it isn't working or if I just forgot the file path, and my compulsory Google/Stack Overflow search did not answer this

It should be located at build/outputs/proguard/release/mapping.txt in your application module's directory.

In the latest version of ProGuard and Android Studio, the file is located at build/outputs/mapping/release/mapping.txt.

For me they are at 'build/outputs/mapping/release'

I found it cleaner to configure proguard to write the mapping.txt file to a location outside of the build/ directory tree, so that it could be more conveniently checked into version control.

To achieve this, put this in your proguard-rules.pro file:

Note: in my experience, this is not overruled by the proguard template file (which was suggested by a commenter to another answer here).

I found that it was not being generated, so I added this to the rules file

Its quite late to answer this question but just in case someone need my answer.

Location of Mapping file to deobfuscate:

ProGuard saves the file in the app app/build/outputs/mapping/FLAVOR/release/mapping.txt

Generally in debug mode you don't need the mapping file because there generally obfuscation is disabled. If it is not that case then make sure in build.gradle file you have below code for debug variant.

mapping.txt file gets overwritten every time you create a release build with ProGuard, so first take backup of that file before creating a new release. It will help to obfuscated stack trace from an older version of your app.

Apart from that there are two ways to obfuscate your code :

When publishing your app on Google Play, you can upload the mapping.txt file for each version of your APK. Then Google Play will deobfuscate incoming stack traces from user-reported issues so you can review them in the Google Play Console.

Some times you want to run the release version of your app(by changing build variant to release and running it) to cross check and fix the errors so that it does not happens in production ( when released to play-store).

To convert an obfuscated stack-trace to a readable one yourself, use the retrace script (retrace.bat on Windows; retrace.sh on Mac/Linux).

It is located in the <sdk-root>/tools/proguard/bin/ directory.

<sdk-root> is the place where your all android libraries and sdks were installed.

The script takes the mapping.txt file and your stack trace, producing a new, readable stack trace.

I prefer local version of obfuscating as is quite handy to pre-check production errors. 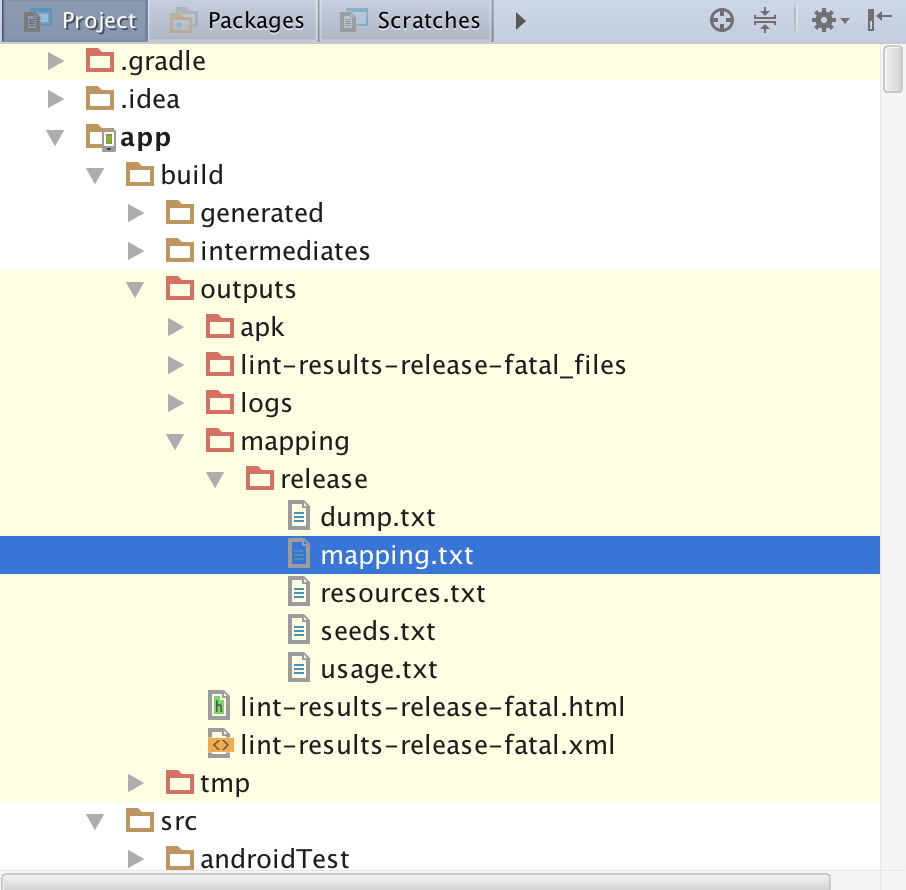 Here it is in a picture - you will find it in the mapping folder:

I am using version Android Studio 2.2.2. For me it's located in the following locations:

If anyone is still searching for mapping.txt:

minifyEnabled in build.gradle has to be set to true

I'm using Android Studio 4.2 Beta 4 and the standard-setting was false.

If minifyEnable is set to false the build is not "minified", so a mapping-file is of course not necessary, but google-play-console asks for the mapping file anyway.

... Very confusing for a beginner

Because I'm dumb and get lost even when somebody tells me where the file is:

5
Where is the proguard mapping file in Android studio
50
Android - How to check Proguard obfuscation has worked?
28
How to change the proguard mapping file name in gradle for Android project
1
Proguard rules for AndroidX AppCompat package
5
How to read "OR call stack" in Android Developer Console crash report?
1
How to make the error title and stacktrace in firebase crashlytics readable?
1
Application crashed with ProGuard