I have access to NumPy and SciPy and want to create a simple FFT of a data set. I have two lists, one that is y values and the other is timestamps for those y values.

What is the simplest way to feed these lists into a SciPy or NumPy method and plot the resulting FFT?

I have looked up examples, but they all rely on creating a set of fake data with some certain number of data points, and frequency, etc. and don't really show how to do it with just a set of data and the corresponding timestamps.

I have tried the following example:

But when I change the argument of fft to my data set and plot it, I get extremely odd results, and it appears the scaling for the frequency may be off. I am unsure.

When I use fft() on the whole thing it just has a huge spike at zero and nothing else.

Spacing is just equal to xInterp[1]-xInterp[0].

So I run a functionally equivalent form of your code in an IPython notebook:

I get what I believe to be very reasonable output. 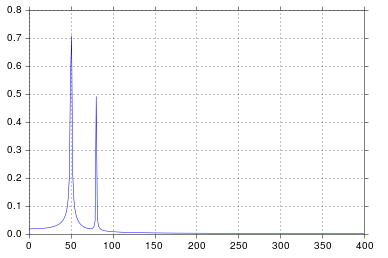 It's been longer than I care to admit since I was in engineering school thinking about signal processing, but spikes at 50 and 80 are exactly what I would expect. So what's the issue?

In response to the raw data and comments being posted

The problem here is that you don't have periodic data. You should always inspect the data that you feed into any algorithm to make sure that it's appropriate. 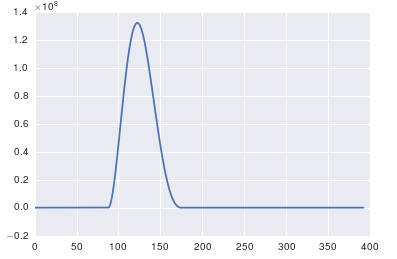 The important thing about fft is that it can only be applied to data in which the timestamp is uniform (i.e. uniform sampling in time, like what you have shown above).

In case of non-uniform sampling, please use a function for fitting the data. There are several tutorials and functions to choose from:

If fitting is not an option, you can directly use some form of interpolation to interpolate data to a uniform sampling:

When you have uniform samples, you will only have to wory about the time delta (t[1] - t[0]) of your samples. In this case, you can directly use the fft functions

The high spike that you have is due to the DC (non-varying, i.e. freq = 0) portion of your signal. It's an issue of scale. If you want to see non-DC frequency content, for visualization, you may need to plot from the offset 1 not from offset 0 of the FFT of the signal.

Modifying the example given above by @PaulH 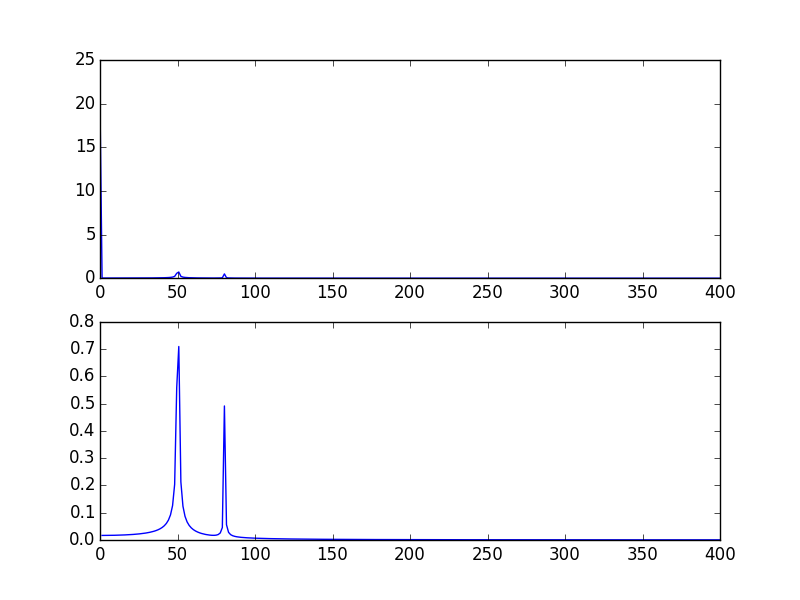 Another way, is to visualize the data in log scale: 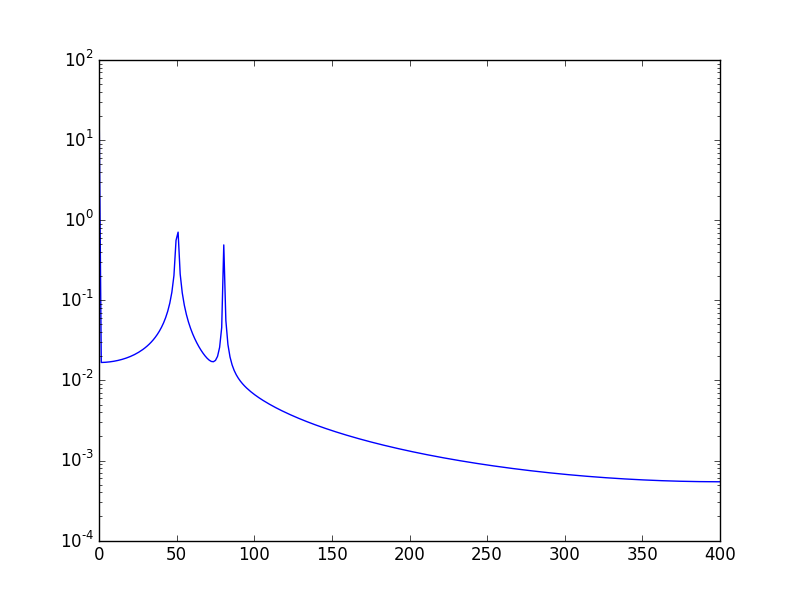 I've built a function that deals with plotting FFT of real signals. The extra bonus in my function relative to the previous answers is that you get the actual amplitude of the signal.

Also, because of the assumption of a real signal, the FFT is symmetric, so we can plot only the positive side of the x-axis: 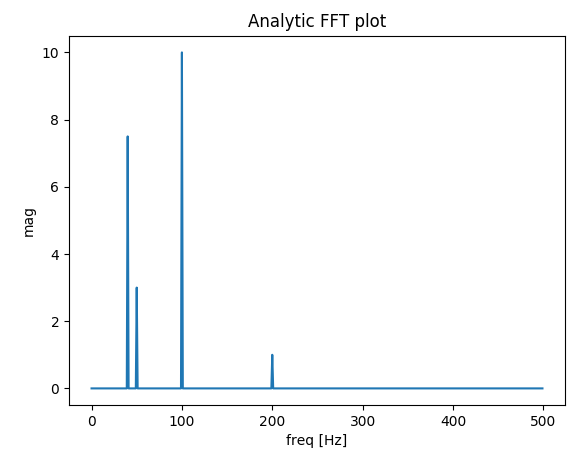 Just as a complement to the answers already given, I would like to point out that often it is important to play with the size of the bins for the FFT. It would make sense to test a bunch of values and pick the one that makes more sense to your application. Often, it is in the same magnitude of the number of samples. This was as assumed by most of the answers given, and produces great and reasonable results. In case one wants to explore that, here is my code version:

I write this additional answer to explain the origins of the diffusion of the spikes when using FFT and especially discuss the scipy.fftpack tutorial with which I disagree at some point.

In this example, the recording time tmax=N*T=0.75. The signal is sin(50*2*pi*x) + 0.5*sin(80*2*pi*x). The frequency signal should contain two spikes at frequencies 50 and 80 with amplitudes 1 and 0.5. However, if the analysed signal does not have a integer number of periods diffusion can appear due to the truncation of the signal: 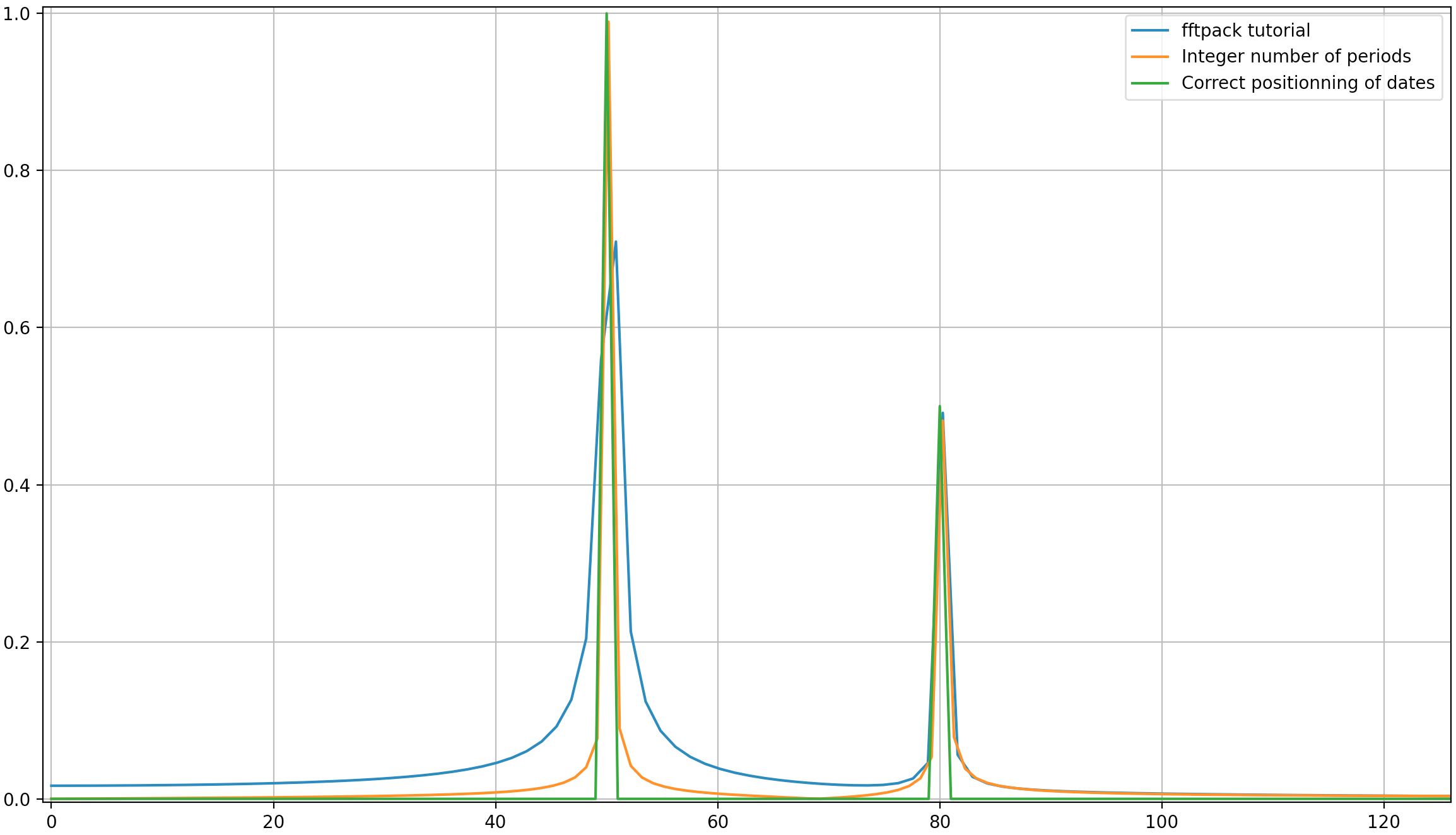 As it can be here, even with using an integer number of periods some diffusion still remains. This behaviour is due to a bad positioning of dates and frequencies in the scipy.fftpack tutorial. Hence, in the theory of discrete Fourier transforms:

In the example above, you can see that the use of arange instead of linspace enables to avoid additional diffusion in the frequency spectrum. Moreover, using the linspace version also leads to an offset of the spikes that are located at slightly higher frequencies than what they should be as it can be seen in the first picture where the spikes are a little bit at the right of the frequencies 50 and 80.

I'll just conclude that the example of usage should be replace by the following code (which is less misleading in my opinion):

Output (the second spike is not diffused anymore): 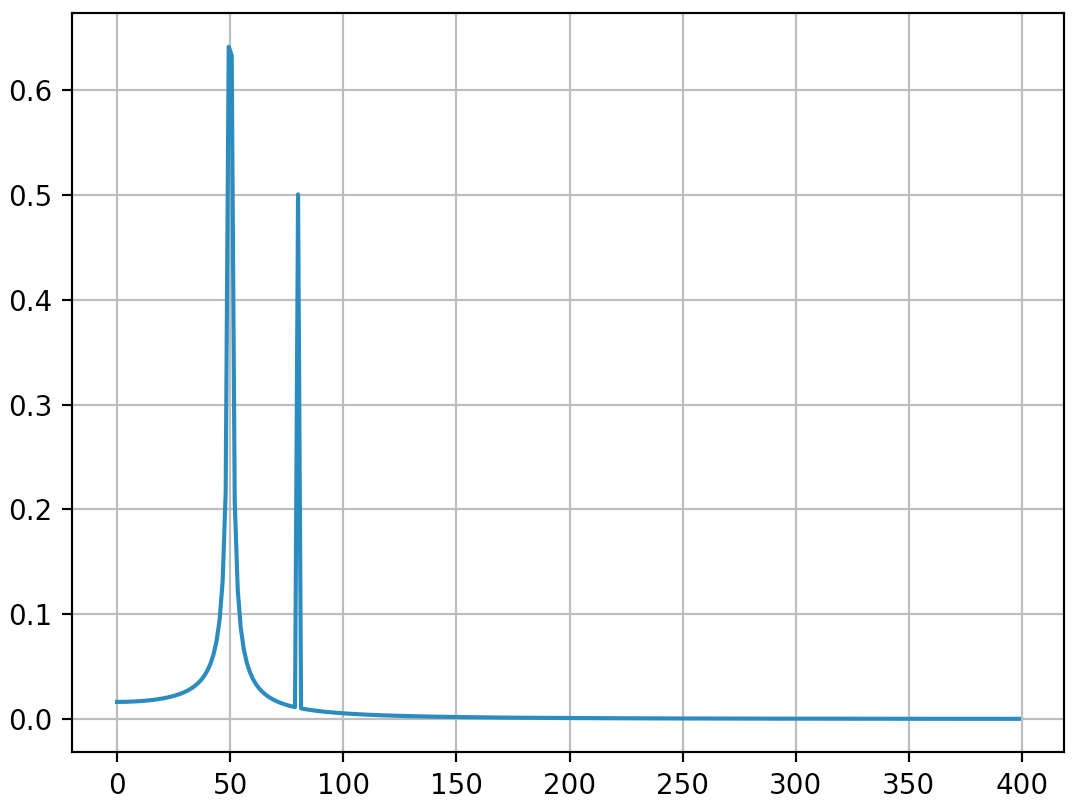 I think this answer still bring some additional explanations on how to apply correctly discrete Fourier transform. Obviously, my answer is too long and there is always additional things to say (ewerlopes talked briefly about aliasing for instance and a lot can be said about windowing), so I'll stop.

I think that it is very important to understand deeply the principles of discrete Fourier transform when applying it because we all know so much people adding factors here and there when applying it in order to obtain what they want.

There are already great solutions on this page, but all have assumed the dataset is uniformly/evenly sampled/distributed. I will try to provide a more general example of randomly sampled data. I will also use this MATLAB tutorial as an example:

Plotting the data and resampled data: 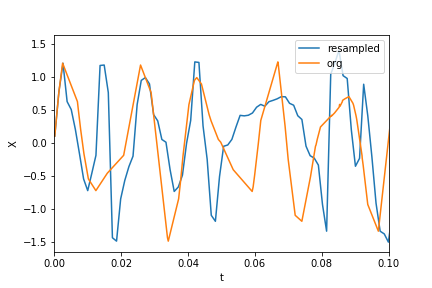 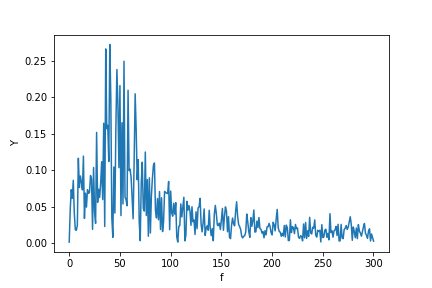 P.S. I finally got time to implement a more canonical algorithm to get a Fourier transform of unevenly distributed data. You may see the code, description, and example Jupyter notebook here.

Not the answer you're looking for? Browse other questions tagged python numpy scipy fft or ask your own question.