I have a local version of Python 3.4.1 and I can run python -m pip install, but I'm unable to find the pip binary to run pip install. What's the difference between these two?

They do exactly the same thing. In fact, the docs for distributing Python modules were just updated to suggest using python -m pip instead of the pip executable, because it's easier to tell which version of python is going to be used to actually run pip that way.

Here's some more concrete "proof", beyond just trusting my word and the bug report I linked :)

If you take a look at the pip executable script, it's just doing this:

It's calling load_entry_point, which returns a function, and then executing that function. The entry point it's using is called 'console_scripts'. If you look at the entry_points.txt file for pip (/usr/lib/python2.7/dist-packages/pip-1.5.4.egg-info/entry_points.txt on my Ubuntu machine), you'll see this:

So the entry point returned is the main function in the pip module.

When you run python -m pip, you're executing the __main__.py script inside the pip package. That looks like this:

This only happens if you create the venv with PyCharm. Please check if Scripts/pip-script.py located in your virtual environment

pip install and python -m pip install -- is not really the same. Or welcome back into the HELL of VERSIONING & DEPENDENCIES :-(

I was used to type pip(.exe) install <name> if I want install a package. But I run into trouble, if I try to install package Pillow. It breaks every time with an error message.

Today I retry python -m pip install copy&pasted from the manual and it works. Before I ignored it and type pip.... Because I thought it is the same.

I start to dive a little bit deeper into pip and I find this question/answer. After a while I found that pip.exe calls the script <virtual-environment/Scripts>pip-script.py.

I fighting with the installation of package Pillow.

I was a little bit surprised that pip.exe still use the old version 19.0.3 of the package and not the new installed version 21.0.1.

I changed the two version strings by hand to 21.0.1. And now pip.exe was able to install Pillow proper.

From now I understand why pip still complains that I use an old version of pip. 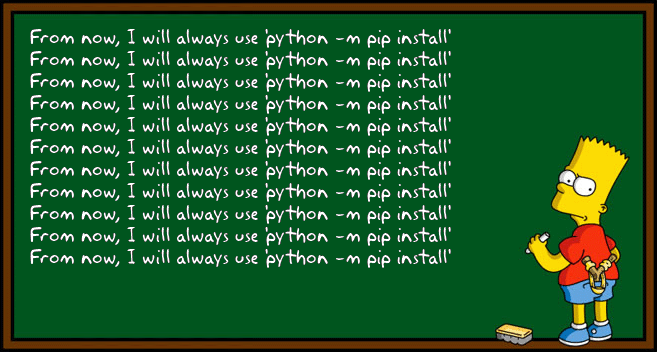 I think the old v19 pip has problem to detect the supported platform and therefore sources instead of binaries are installed.