Now that Apple just announced the iPhone 6 will have an NFC chip, does anyone know if iOS 8 will enable reading/detecting RFID tags for the iPhone 6 device? Anyone have any details to share on this?

The iPhone6/6s/6+ are NOT designed to read passive NFC tags (aka Discovery Mode). There's a lot of misinformation on this topic, so I thought to provide some tangible info for developers to consider. The lack of NFC tag read support is not because of software but because of hardware. To understand why, you need to understand how NFC works. NFC works by way of Load Modulation. That means that the interrogator (PCD) emits a carrier magnetic field that energizes the passive target (PICC). With the potential generated by this carrier field, the target then is able to demodulate data coming from the interrogator and respond by modulating data over top of this very same field. The key here is that the target never creates a field of its own.

If you look at the iPhone6 teardown and parts list you will see the presence of a very small NFC loop antenna as well as the use of the AS3923 booster IC. This design was intended for custom microSD or SIM cards to enable mobile phones of old to do payments. This is the type of application where the mobile phone presents a Card Emulated credential to a high power contactless POS terminal. The POS terminal acts as the reader, energizing the iPhone6 with help from the AS3923 chip. The AS3923 block diagram clearly shows how the RX and TX modulation is boosted from a signal presented by a reader device. In other words the iPhone6 is not meant to provide a field, only to react to one. That's why it's design is only meant for NFC Card Emulation and perhaps Peer-2-Peer, but definitely not tag Discovery. 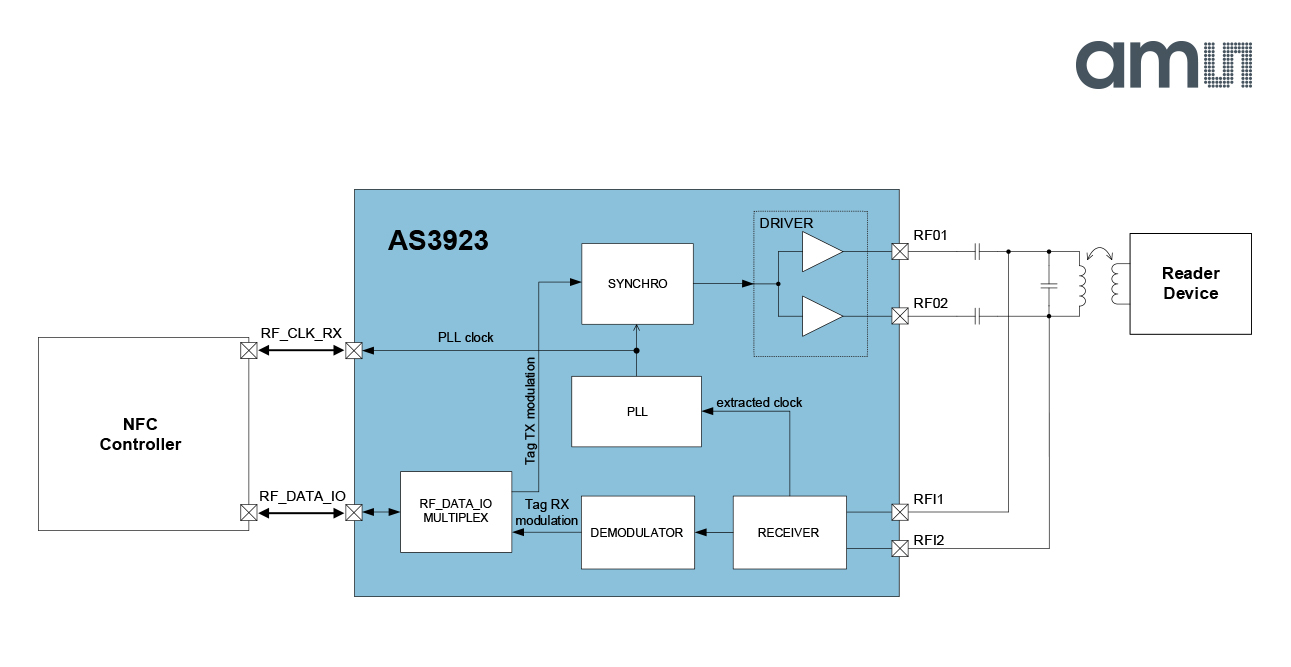 There are some alternatives to achieving tag Discovery with an iPhone6 using HW accessories. I talk about these integrations and how developers can architect solutions in this blog post. Our low power reader designs open interesting opportunities for mobile engagement that few developers are thinking about.

Disclosure: I'm the founder of Flomio, Inc., a TechStars company that delivers proximity ID hardware, software, and services for applications ranging from access control to payments.

Update: This rumor, if true, would open up the possibility for the iPhone to practically support NFC tag Discovery mode. An all glass design would not interfere with the NFC antenna as does the metal back of the current iPhone. We've attempted this design approach --albeit with cheaper materials-- on some of our custom reader designs with success so looking forward to this improvement.

Update: iOS11 has announced support for "NFC reader mode" for iPhone7/7+. Details here. API only supports reading NDEF messages (no ISO7816 APDUs) while an app is in the foreground (no background detection). Due out in the Fall, 2017... check the screenshot from WWDC keynote: 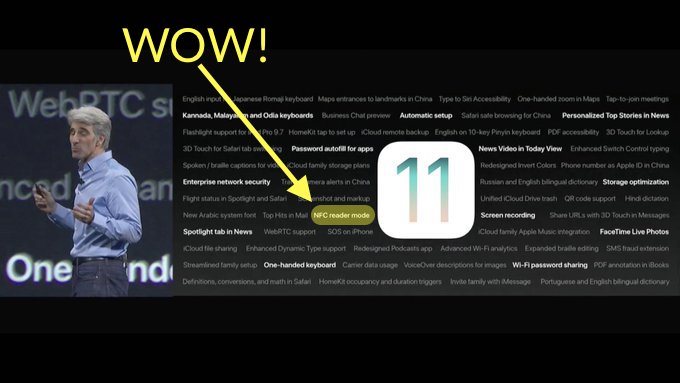 From digging into the iOS 8 docs that are available as of Sept 9th 3:30pm there is no mention of developer access to the NFC controller to perform any NFC operations; that includes reading tags, writing tags, pairing, payments, tag emulation... Given its an NXP controller the hardware has the capability to perform these features. They did mention a 3rd party app for the watch that allowed a hotel guest to open their room door with NFC. This is a classic use case for NFC and gives some indication that the NFC controller will be open to developers at some point. Remember, the watch is not supposed to be released until Q1 2015. So for now I'd say it's closed but will be open soon. Given the 'newness' of contactless payments for the general US consumer and the recent security breaches its not surprising Apple wants to keep this closed for a while.

Disclosure: Im the CEO of GoToTags, an NFC company with obvious vested interest in Apple opening up NFC to developers.

The hotel app actually uses Bluetooth, not NFC. NFC is still often used for door unlocking, just not in this one example. NFC could be used if the watch has an open NFC controller.

I do know that Apple is aware of all of this and is discussing this with their top developers and stakeholders. There has already been massive negative push back on the lack of support for reading tags. As often the case in the past, I expect Apple to eventually open this up to developers for non-payment related functionality (reading tags, pairing). I do not think Apple will ever allow other wallets though. File sharing will likely be left to AirDrop as well.

I am continually asked for updates about this topic, often with people referencing this post. With Apple releasing the iPhone SE, many are again asking why Apple has not supported tag reading yet. In summary Apple is more focused on Apple Pay succeeding than the other use cases for NFC for now. Apple could make a lot of money from Apple Pay, and has less to make from the other uses for NFC. Apple will likely open up NFC tag reading when they feel that consumer trust and security with NFC and Apple Pay is such that it wont put Apple Pay at risk. Further information here.

A developer in Greece has hacked the iPhone 6s to get it to read NFC tags via the NFC private frameworks; more info & video. While this isn't a long term solution, it provides some guidance on some outstanding question: Is there enough power in the iPhone's NFC controller to power an NFC tag? Looks like the answer is yes. From initial testing the range is a few cm, which isn't too bad. It might also be the power is tunable; this is being investigated at this time. The implications of this are significant. If the older model phones do have enough RF power for tag reading/writing, then when Apple does open up the SDK it means there will be 100Ms of iPhones that can read NFC tags, vs the case where only the new iPhones could.

At the moment, there isn't any open access to the NFC controller. There are currently no NFC APIs in the iOS 8 GM SDK - which would indicate that the NFC capability will be restricted to Apple Pay at launch. This is our understanding.

Clearly, the NXP chip inside the iPhone 6 is likely to be able to do more so this doesn't mean that additional features (pairing, tag scanning/encoding) will not be added for release or in the near future.

At the moment, Apple has not opened any access to the embedded NFC chip to developers as suggested by many articles such as these ones :

The list goes on. The main reason seems (like lots the other hardware features added to the iPhone in the past) that Apple wants to ensure the security of such technology before releasing any API for developers to let them do whatever they want. So at first, they will use it internally for their needs only (such as Apple Pay at launch time).

"At the moment, there isn't any open access to the NFC controller," said RapidNFC, a provider of NFC tags. "There are currently no NFC APIs in the iOS 8 GM SDK".

But eventually, I think we can all agree that they will develop such API, it's only a matter of time.

As a test drive I made this repo

Then we need to start the session by:

The delegate (which self should implement) has basically two functions:

here is my reference Apple docs

The only information currently available is that Apple Pay will be available in ios8, but that doesn't shed any light on whether RFID tags or rather NFC tags specifically will be able to be detected/read.

IMO it would be a shortsighted move not to allow that possibility, but really the money is in Apple Pay, not necessarily in allowing developers access to those features - we've seen it before with tethering, Bluetooth SPP, and diminished access to certain functions.

...but then again, it's been about 5 hours since the first announcement.

I think it will be sometime before we get to see access to the NFC as the pure security side of it like for example being able to walk past somebody brush past them and & get your phone to the zap the card details or simply Wave your phone over someone's wallet which They left on the desk.

1
Does iOS 8 include an NFC SDK for developers?
2
Does the iPhone 6 support NFC scanning that will open up the Safari browser?
1
Is there was a way to make an IOS app that could interact with NFC.?
0
Passing data to iOS app from the received NFC data
22
iOS 11 Core NFC - any sample code?
2
APDU request through NFC in iPhone 6?
-3
Data reading and writing in a RFID chip through iphone application
1
How to read RFID using iPhone SDK
1
Is there a way to detect rfid chip on an iphone?
-2
iPhone newbie: is possible to use NFC on iPhone?
See more linked questions

1253
How can I develop for iPhone using a Windows development machine?
1778
How can I make a UITextField move up when the keyboard is present - on starting to edit?
645
iOS app with framework crashed on device, dyld: Library not loaded, Xcode 6 Beta
496
Capture iOS Simulator video for App Preview
787
Xcode process launch failed: Security
902
Xcode error "Could not find Developer Disk Image"
5
Reading NFC Tags with iPhone 6 / iOS 11
807
Xcode building for iOS Simulator, but linking in an object file built for iOS, for architecture 'arm64'