I'm trying to pass data from the modal ViewController to his source ViewController. I think I have to use delegation but it doesn't work.

The backFromCamera method it's not called. What did I do wrong?

You didn't set a delegate so it was empty when you tried to call backFromCamera().

Here's a simple working example you can test out. Notice the use of the optional type (?) for the delegate.

You can find all the information you need in Apple's Swift documentation.

Obviously the chosen answer is correct, but it didn't help me. I did successfully implement protocols though, so I wanted to provide my own explanation in case anyone is struggling with grasping the concept, like I was.

When I write my protocols, I put them in my "ToolBox" document and I still write comments to remind myself which VCs are doing what. Two examples: 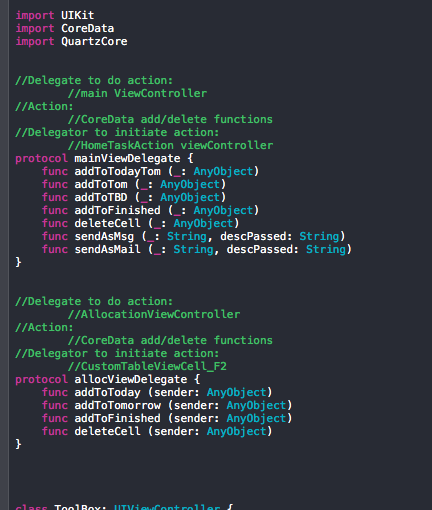 So there is always:

See the image above for a reference. Essentially, the protocol code is just where you give the protocol a name and declare what functions you want to remotely call/delegate to. Name the protocol. Declare the names of the functions that can be called upon and declare their parameter types such as string, etc.

2. Code in a VC which initiates the action

This is the code that initiates the protocol. In this example, this is code from a table cell, which needs to delegate some work back to the main table VC. The first screenshot shows the creation of the delegate variable and the second screenshot is the actual use of that variable.

So the below code are table-cell buttons. They all need to trigger code outside of the cell VC, so they all trigger functions using the protocol I declared above. 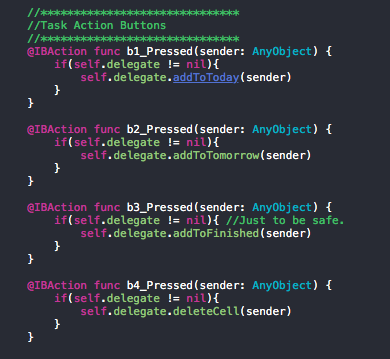 3. Code in a VC which is delegated to carry out the action

Now the protocol is being called, but which VC answers the call? To answer that question, choose the VC and add the protocol name to the class declaration:

Lastly, you need the actual meat of the whole thing. Not the trigger, not the protocol itself, not the class declaration... but the actual function you want to call:

I don't know why protocols just wouldn't sink through my thick skull but they wouldn't. I hope this helps others like me!

Not the answer you're looking for? Browse other questions tagged ios uiviewcontroller swift delegates or ask your own question.