I want to set version of:

Ideal version number would allow tracing installed software back to the exact source code.
Something like:

First 2 parts of the version I want to store in some simple text \ XML file in version control near the solution, as I believe they should live together. Developers will update this file manually (for example following Semantic Versioning approach). Each build will read this version file, get 3d part of the version from the calling CI tool, and update all the necessary files with the version.

What's the best way to implement this?

I've used a few approaches in the past:

1) NAnt \ MsBuild wrapper that does this version work, then calls MsBuild for the solution. It could be called from CI tool (Jenkins \ TeamCity \ etc).

Problem - integration with TFS gated check-in is ugly as I build solution twice.

Problem - it's not that simple, and causes some merge work on TFS upgrades. Also changeset number doesn't exist yet in gated check-ins, so we can only use the previous changeset id.

3) A separate MsBuild project in solution, which does only this versioning task, and is configured to run first in Project Build Order of the VS solution.

I know different MsBuild and TFS extension packs that can simplify updates. This topic is not about which one is the best. The question is more methodological than technical.

I also think that it would be ideal if Microsoft include something for versioning in their standard TFS build template. Other CI tools already have this functionality (AssemblyInfo patcher).

I've decided to clearly express the Versioning Principles that will conform to the best practices of Agile \ Continuous Delivery:

1) Ability to reproduce any historic build

2) As a consequence of 1) and according to CD principles everything (source code, tests, app configs, env configs, build\package\deploy scripts, etc) is stored under version control and so has a version assigned to it

5) There is only 1 master copy of the version, which is used in all parts of automated build\packaging process

See my own answer below.
I was lucky to find the solution that meets all my requirements!

Good grief, all those complicated answers.

In TFS 2013 this is simple. The Community TFS Build Extensions site offers a simple PowerShell to pull the build number from the build name that is assigned by TFS. 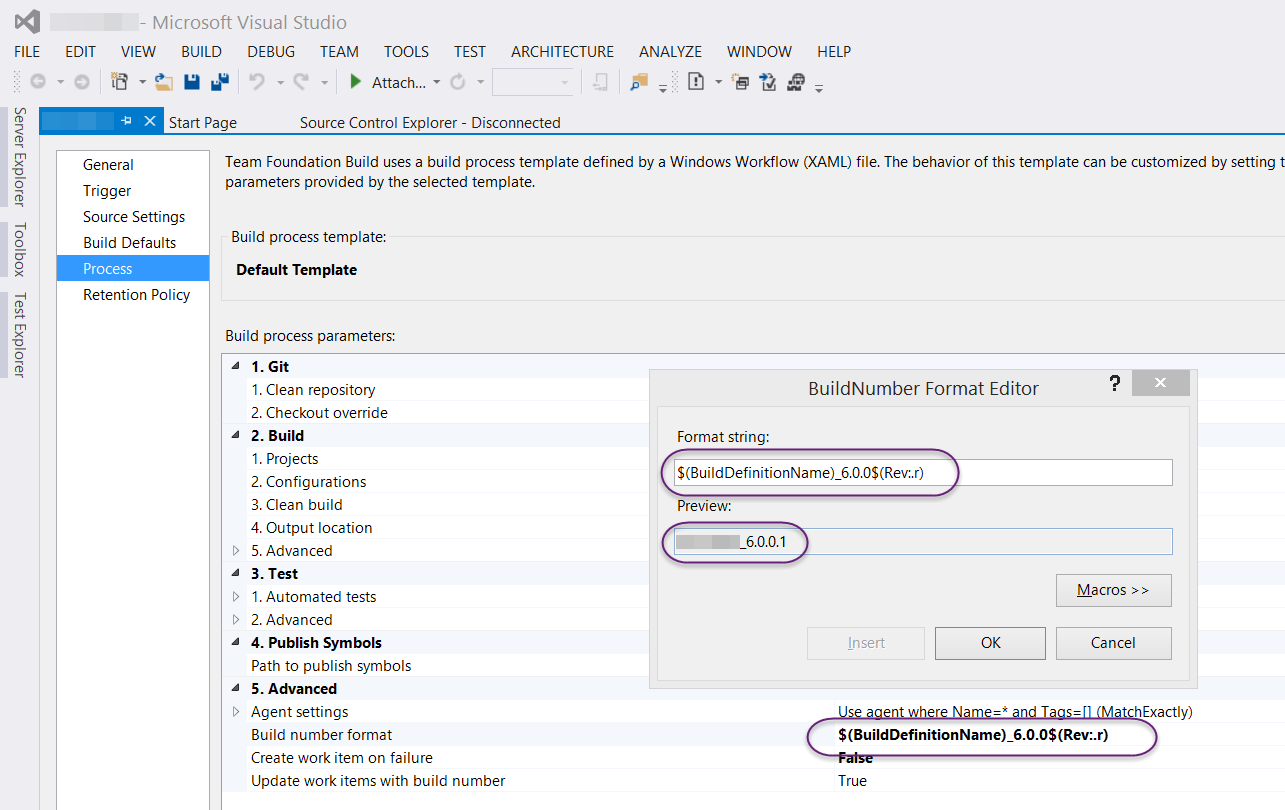 You configure your build number format to be "$(BuildDefinitionName)_6.0.0$(Rev:.r)" which will result in something like "6.0.0.1" where the "1" is incremented for each build.

You then add the PowerShell versioning script to your build and it automagically scrapes the version number above and applies it to all AssemblyInfo.* files in the build folder. You can add additional file types by updating the script.

I came up with a solution that meets all my requirements, and surprisingly quite simple one!

Put all custom Versioning work into a custom Version.proj MsBuild script and call it in TFS build definition before the .sln. The script injects Version into source code (SharedAssemblyInfo.cs, Wix code, readme.txt), and then solution build builds that source code.

Version is formed from Major and Minor numbers living in Version.xml file stored in TFS together with the source codes; and from Changeset Number supplied as TF_BUILD_SOURCEGETVERSION env var by parent TFS Build process 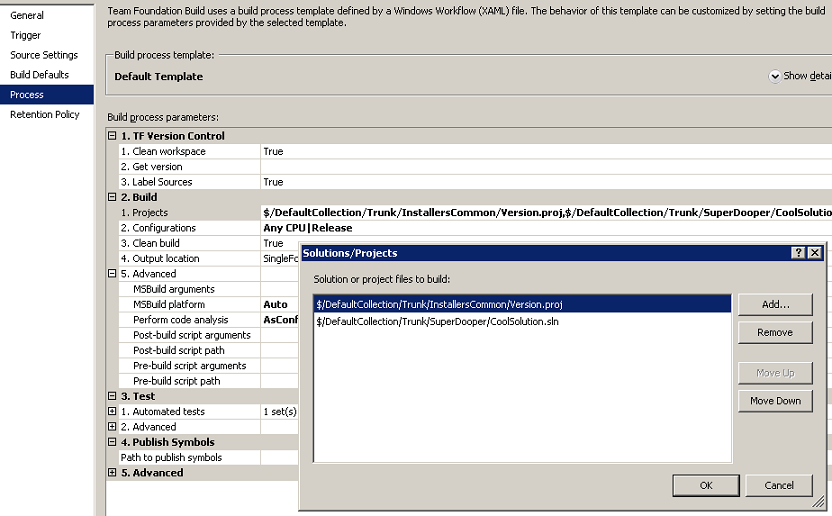 Thanks Microsoft for this:

Injecting the Changeset number is great, but it really doesn't do everything I need it to. For instance, if I know the changeset number of a build produced by my build system, do I really know what is in that executable? No I do not, as the build could have been a private build, or even a failed build.

We put our trust in the Build number (BuildID, really) instead, so that we can get as much data about that build as possible by querying the TFS system after the fact. This way we can determine if the build was a private build, was a build that had special command line parameters passed to it, and other pertinent details.

We use the following setup:

To query a build by its build number then, you can do the following in PowerShell (with the Visual Studio Team Foundation Server Power Tools installed):

With the '$bld' you can now query all the properties of that particular build. For instance, to see what changeset the build was based on, the status of the build, who instigated the build, and if there was a shelveset for the build:

I downloaded this script (thanks to MrHinsh's answer), checked-in the script in source control and specified it in the build definition pre-build script path: 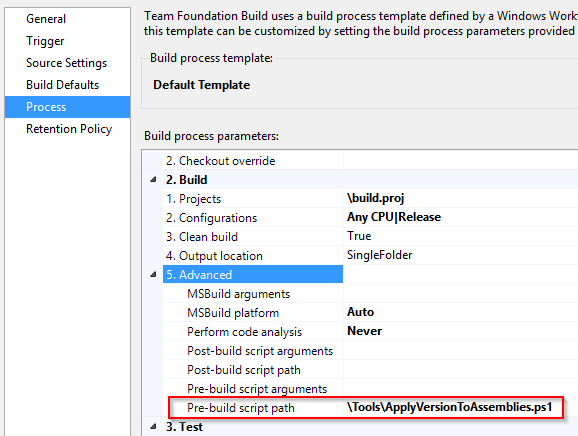 Then I configured build number format as "$(BuildDefinitionName)_1.0.0$(Rev:.r)" (see MrHinsh's answer for details).

And it works to my surprise.

I'm working on a project that has similar, but not identical requirements. Th major and minor versions are kept in AssemblyInfo as any standard .net project would have them. On our build server, we have a wrapper MsBuild script that invokes the .sln build, but it also does some setup tasks including generating additional build information. This build file is only executed on our build server. Developers building through Visual Studio will only build the .sln, and not get that additional behavior.

We have a similar requirement and make use of the NANT ASMINFO TASK. During the TFS build we invoke this additional NANT target which creates a new AssemblyVersion.cs file.

Please make note of the property ${version.number}, which is actually set based on your requirement. Then we loop through the exisiting Assemblyversion.cs files and make them read only and then replace it with the new file which we created.

As you might know, this target gets executed before compilation.

You can use the community build tasks or I roll my own.

I do the same for MSI's and DacPac's

basically attrib the assemblyinfo file and then update the number using a regex, on a daily build leave the net version at the same value and just update the file version, so you can maintain compatability

the same method for the MSI's and the Dacapac's just different locations. in the MSI i have a Buildparams.wxi which has the following structure

Not the answer you're looking for? Browse other questions tagged .net tfs msbuild wix versioning or ask your own question.