Om but in javascript

I'm getting to be a fan of David Nolen's Om library.

I want to build a not-too-big web app in our team, but I cannot really convince my teammates to switch to ClojureScript.

Is there a way I can use the principles used in om but building the app in JavaScript?

I'm struggling with number 5 above.

Has anybody ventured into this territory or has any suggestions? Maybe someone has tried building a react.js app using immutable-js?

Cursors are not really scalable, despite using CQRS principles described below, it still creates too much boilerplate in components, that is hard to maintain, and add friction when you want to move components around in an existing app.

Also, it's not clear for many devs on when to use and not use cursors, and I see devs using cursors in place they should not be used, making the components less reusable that components taking simple props.

Redux uses connect(), and clearly explains when to use it (container components), and when not to (stateless/reusable components). It solves the boilerplate problem of passing down cursors down the tree, and performs greatly without too much compromises.

I've written about drawbacks of not using connect() here

Despite not using cursors anymore, most parts of my answer remains valid IMHO

Some alternatives in JS are Morearty, React-cursors, Omniscient or Baobab

At that time there was no immutable-js yet and I didn't do the migration, still using plain JS objects (frozen).

I don't think using a persistent data structures lib is really required unless you have very large lists that you modify/copy often. You could use these projects when you notice performance problems as an optimization but it does not seem to be required to implement the Om's concepts to leverage shouldComponentUpdate. One thing that can be interesting is the part of immutable-js about batching mutations. But anyway I still think it's optimization and is not a core prerequisite to have very decent performances with React using Om's concepts.

You can find our opensource code here:

It has the concept of cursor, like in Om (like a functional lens). It permits for components to be able to render the state, but also modify it easily. This is handy for forms as you can link to cursors directly for 2-way data binding:

It has the concept of pure render, optimized out of the box, like in Om

In Atom-React components, you can't have a local component state. All the state is stored outside of React. Unless you have integration needs of existing Js libraries (you can still use regular React classes), you store all the state in the Atom (even for async/loading values) and the whole app rerenders itself from the main React component. React is then just a templating engine, very efficient, that transform a JSON state into DOM. I find this very handy because I can log the current Atom state on every render, and then debugging the rendering code is so easy. Thanks to out of the box shouldComponentUpdate it is fast enough, that I can even rerender the full app whenever a user press a new keyboard key on a text input, or hover a button with a mouse. Even on a mobile phone!

Atom-React have a very opinionated way to manage the state inspired by Flux and CQRS. Once you have all your state outside of React, and you have an efficient way to transform that JSON state to DOM, you will find out that the remaining difficulty is to manage your JSON state.

Some of these difficulties encountered are:

So I end up with the notion of Store, inspired by the Facebook Flux architecture. The point is that I really dislike the fact that a Flux store can actually depend on another, requiring to orchestrate actions through a complex dispatcher. And you end up having to understand the state of multiple stores to be able to render them.

In Atom-React, the Store is just a "reserved namespace" inside the state hold by the Atom.

So I prefer all stores to be updated from an event stream of what happened in the application. Each store is independant, and does not access the data of other stores (exactly like in a CQRS architecture, where components receive exactly the same events, are hosted in different machines, and manage their own state like they want to). This makes it easier to maintain as when you are developping a new component you just have to understand only the state of one store. This somehow leads to data duplication because now multiple stores may have to keep the same data in some cases (for exemple, on a SPA, it is probable you want the current user id in many places of your app). But if 2 stores put the same object in their state (coming from an event) this actually does not consume any additional data as this is still 1 object, referenced twice in the 2 different stores.

To understand the reasons behind this choice, you can read blog posts of CQRS leader Udi Dahan,The Fallacy Of ReUse and others about Autonomous Components.

So, a store is just a piece of code that receive events and updates its namespaced state in the Atom.

This moves the complexity of state management to another layer. Now the hardest is to define with precision which are your application events.

Note that this project is still very unstable and undocumented/not well tested. But we already use it here with great success. If you want to discuss about it or contribute, you can reach me on IRC: Sebastien-L in #reactjs.

This is what it feels to develop a SPA with this framework. Everytime it is rendered, with debug mode, you have: 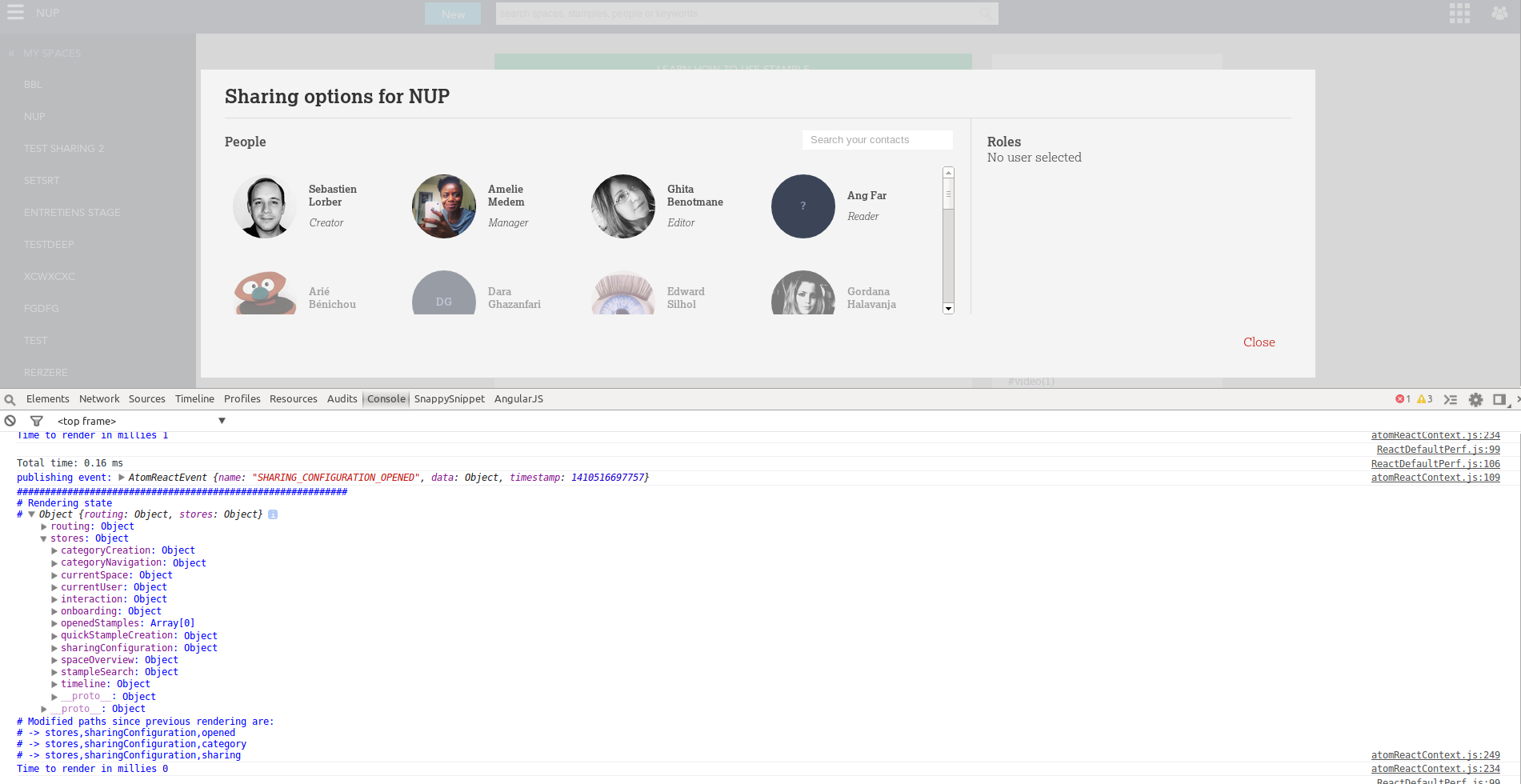 Some advantages that this kind of framework can bring that I have not explored so much yet:

I've made a video of the "record user session in JSON" feature for those interested.

You can have Om like app state without yet another React wrapper and with pure Flux - check it here https://github.com/steida/este That's my very complete React starter kit.

199
Where should ajax request be made in Flux app?
47
How to handle complex side-effects in Redux?
9
How to pass state with parent to child component
4
React Flux: Store dependencies
2
flux store - unit tests
3
Flux: Handling Modal windows
3
Flux: Where should the intermediate, errors be stored?
1
ReactJS Selenium Testing
0
How to choose the appropriate event abstraction level

3315
How do I format a date in JavaScript?
5
How to model relational data in an Om-like immutable app state
715
What do multiple arrow functions mean in JavaScript?
0
Updating selected item in JavaScript apps with immutable state
774
Uncaught Error: Invariant Violation: Element type is invalid: expected a string (for built-in components) or a class/function but got: object
17
Can TypeScript's `readonly` fully replace Immutable.js?
2
How to change login button to logout button in React
136
Is using Redux with Next.js an anti-pattern?
0
How React keeps the component state?