I have a very curious problem with my Leopard Imaging M021 camera. The company doesn't really support linux, so the camera will only output raw data. I need it to run on a Beagleboard, so that's why I'm putting effort into getting it to work.

An employee of theirs has told me that it is in YUY2 format (usually 16 bits per pixel), but the high 4 bits are always 0, and the lower 12 bits contain information like so:

HOWEVER, the only way I've been able to actually get the image to display correctly is if I use IrfanView's RAW image display and set it to 12 bits per pixel, not normalized, with a bayer pattern of GR, and a vertical flip. I have no idea why the vertical flip is required, because the other settings will display a skewed, weird image but not flipped. Then I use 12 BPP and it is flipped. 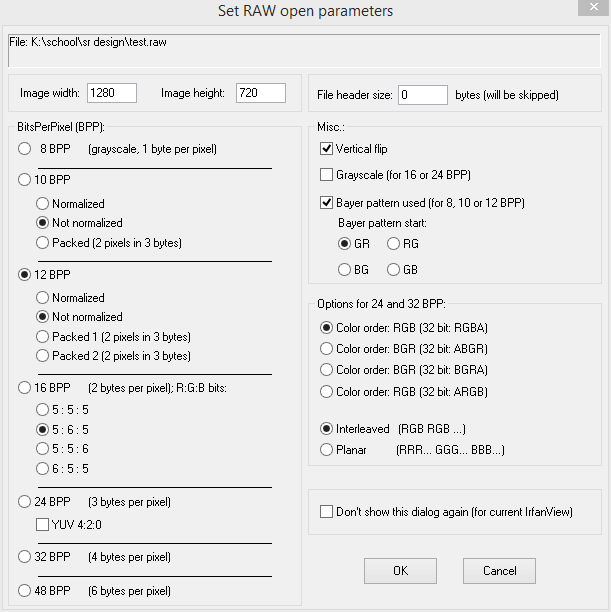 I suppose since the high 4 bits are always 0, that causes it to in actuality be 12 bits per pixel rather than 16?

I need to know what is really going on with the bytes in the file in order to write the conversion algorithm myself (unless anyone knows of an open source program that does the same thing as IrfanView).

Using Python, I've made a really quick script to just pull the Y component out and view it (expecting a greyscale version of the image), but I get a very distorted version. Is there something wrong with my code? Am I pulling out the data in the wrong order? What the heck does "not normalized" mean in IrfanView? Why is the GR Bayer pattern setting required to see the image in RGB? 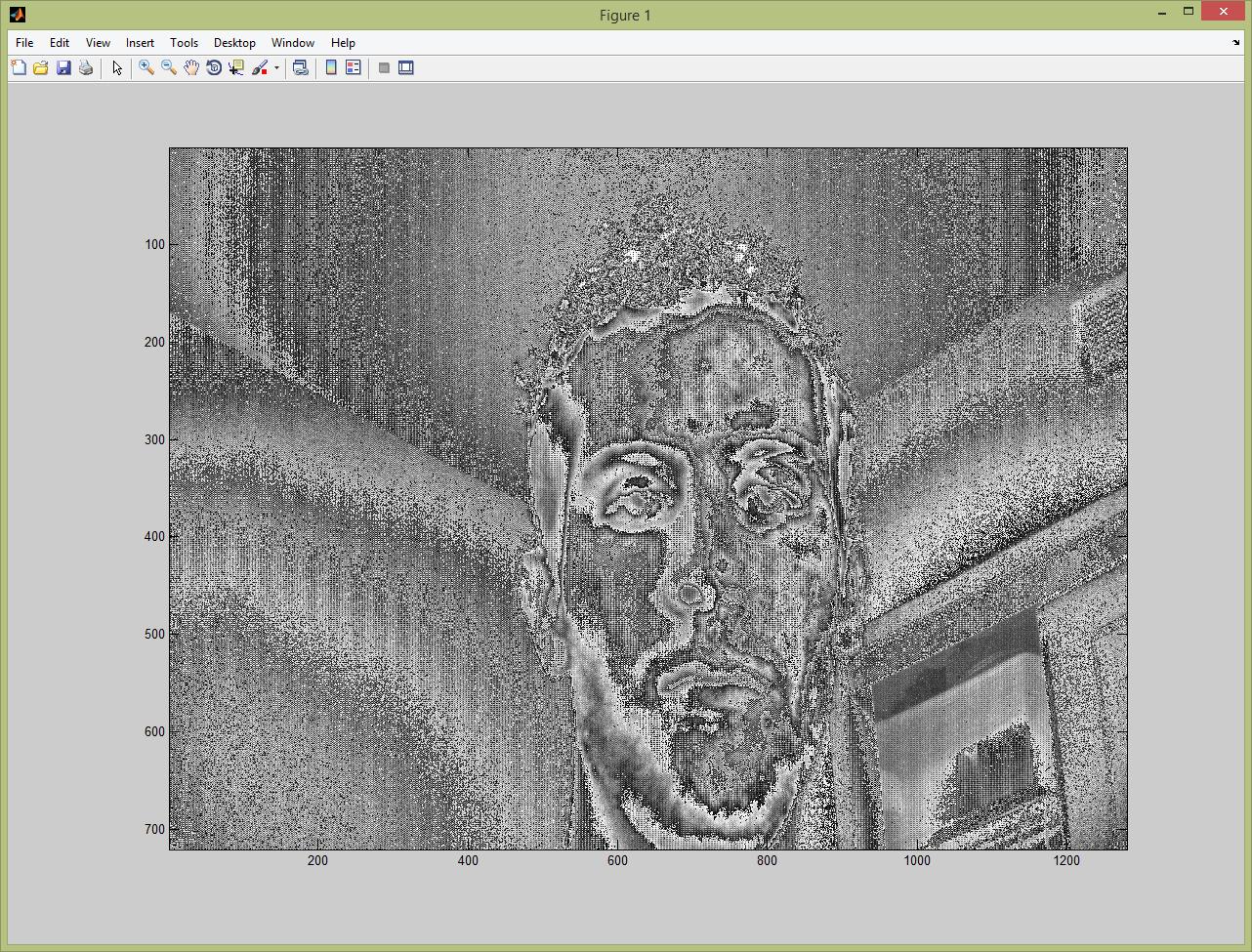 I would appreciate anyone's help or advice on this.

Further possibly helpful evidence. If I run this in matlab, just treating every 2 bytes as the exact pixel value:

I get this image: 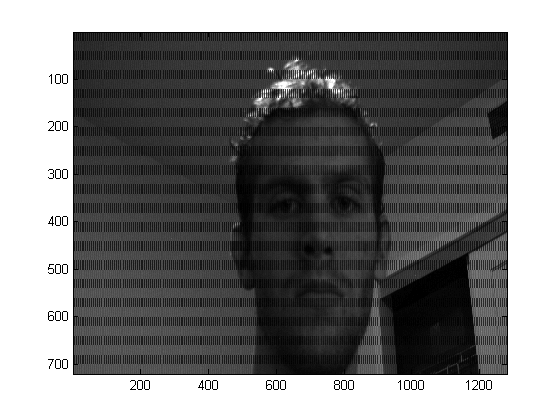 With the expert help of Mark Ransom, I wrote up a nice OpenCV script to read in the data, utilize CV_BayerGR2RGB to convert to RGB, and view the image. It works!

The evidence that you have, first that each byte has the upper 4 bits as 0 and the fact that you can see a proper color picture from Irfanview, tells me that the employee was incorrect and the format isn't actually YUY2 - it's GRGB.

This code should pull out the green pixels and double them up so you can get an idea of what the image looks like. Note that the even and odd lines will alternate between starting with G and (R or B).

You'll probably want to right-shift these values >> 4 before you write them out to a gray-scale file.

Edit: The code had one remaining bug (an extra read), and I didn't realize the values were little-endian instead of big-endian. Those changes are already applied to the code sample above. 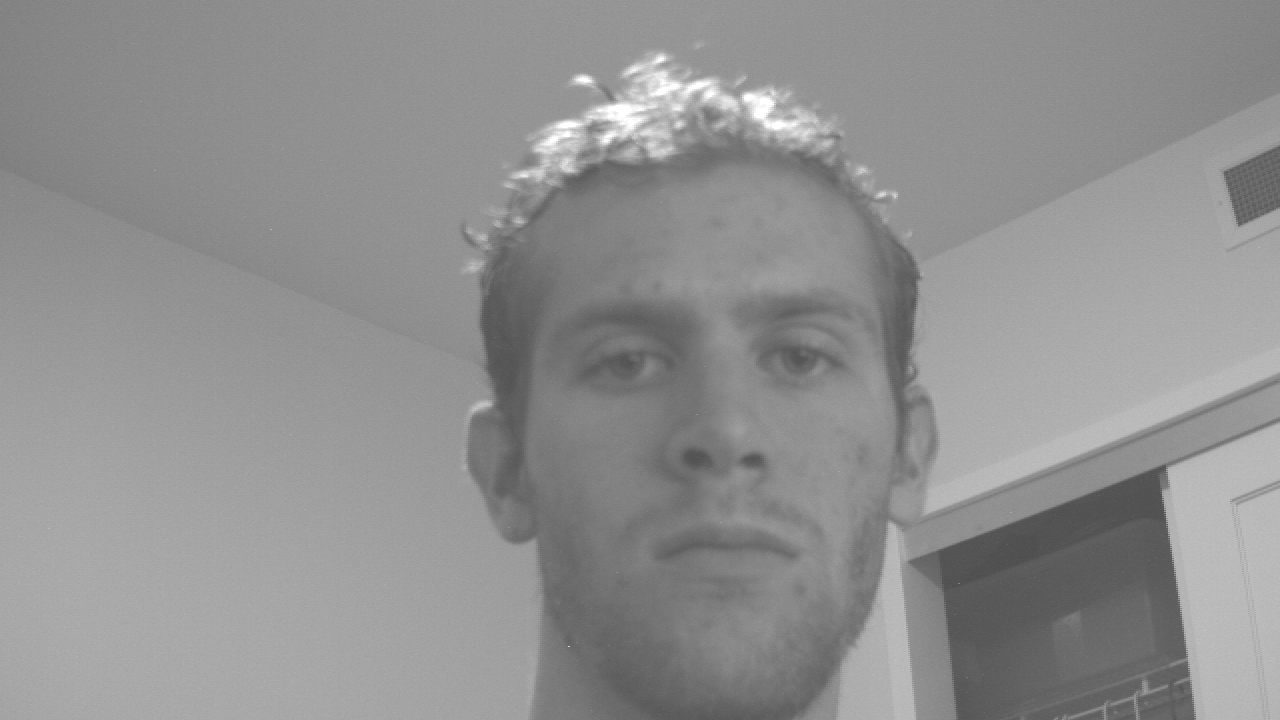 I'm afraid de-Bayering is a little beyond what I can pull off in a short StackOverflow answer.

Not the answer you're looking for? Browse other questions tagged python colors camera computer-vision or ask your own question.

1484
How can I flush the output of the print function (unbuffer python output)?
452
How can I color Python logging output?
1238
Running shell command and capturing the output
4
Issue converting unsigned char * image to OpenCV Mat
2
Colorizing 16 bit Greyscale Mat produces only half of image
0
RGB color in 24 bitmap image and 16 bitmap image
1
Indexed color memory size vs raw image
1
How to get the 10bit per pixel from a raw image file?
1
saving image using matplotlib in python