SugarCRM fetching data from outside REST service to subpanel

I'm trying to create subpanel in Account detail view where list of elements is fetched from external REST service.

I know how to define subpanel, but have no idea how to fill it with data from external network source. Was trying to use get_subpanel_data but there I can only change SQL.

Any ideas how can I do this?

When I've done this in the the past, at least with Sugar 6, I opted distinctly not to try to create a true subpanel. The data being loaded is coming from an outside source and is loaded dynamically with the page, so why present it as if it's static data coming from Sugar? Instead, I created a custom Smarty template to use as the footer on the detail page. For such an example, you can check how it works on the Calls Edit View. I think it's the footerTpl parameter in the detailviewdefs.php or editviewdefs.php. I loaded the smarty template by creating a custom detail view for my module, so custom/modules/MyModule/views/view.detail.php - extend the base Detail View class and override the display to feed Smarty new params, then your Smarty template only needs to iterate through and present the data that your view defined.

To be super-hip and abide by MVC, you could even put your custom code into your bean (if it's a custom module) or into a custom controller method, then reference that from the view.detail.php, and still feed it from there to the Smarty template.

Alternatively, you could just load JavaScript into the Smarty template and use the JavaScript to call the third-party service, parse and present it, etc.

I realize this question is a little bit old now however it comes up fairly often so why not provide an answer with a couple possible solutions. I won't get into code but more just into the design theory of how it can work. If someone needs more specific code help then that is another question.

When you go this route, you are restrained to using the Columns in the SubPanel. I assume it is using the actual Metadata files to determine which Field Columns a SubPanel can use so you pretty much need your custom data in a Database table to have the same column names as the fields defined in the SubPanel Metadata.

Obviously this works great in the right situation, however not always and that leads us into the 2nd method I know of. 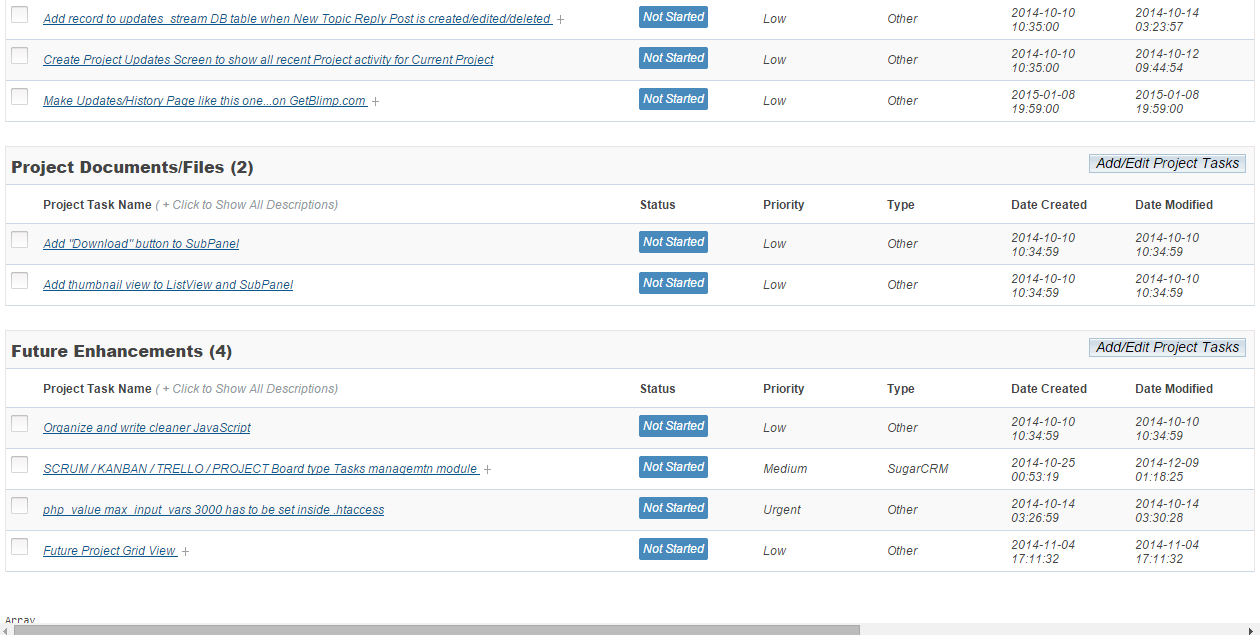 In the screenshot, you can see in this example that I have something looking Similar to a SubPanel however it is not and is much for flexible and easy to customize.

Example, to the far left column in my fake subpanel is image checkboxes. When clicked on, an AJAX request is made to change the Task row Status.

After that, the checkbox image is updated to indicate the new Status state, the Modified DateTime is updated, the Status column has color background SPANS and is also updated with the correct text and background color when the left side checkbox is clicked.

Doing any of this with the standard SubPanels is a complete nightmare and would be difficult to do some of the stuff that you are open to do when you build your own version of a SubPanel.

With that said, I have built an identical clone of the above screenshot using SugarCRM default SubPanels! It was a nightmare. I could easily update the content and HTML in some of the columns. I even had the AJAX click checkbox image to update and do all the other updates I mentioned above. It wasn't too hard and worked fairly good but it had some issues.

In my case, this means that nice looking colored background Status spans are lost, the image checkboxes are lost, and some other functionality is lost.

Now to get super technical, I could have gone another 3rd route and instead made new Custom Field Types for each SubPanel filed that I needed to apply custom HTML to. This process is super hard in my experience and in some cases it really isn't the BEST solution.

Because of the reason explained, this is why my new modules use the Custom HTML route to generate my own version of a custom subpanel or whatever Data is needed in my Module pages! So far it is working better than I imagined and has opened doors for me to build custom SugarCRM modules that I previously didn't even realize would be possible to build due to some of the issues I mentioned above. Now I bypass them altogether and open the door to do pretty much anything!

I've got some really cool stuff for SugarCRM in the works right now. If anyone has any questions feel free to ask in a new question or for me personally in a comment here.

Not the answer you're looking for? Browse other questions tagged rest sugarcrm or ask your own question.

611
Understanding REST: Verbs, error codes, and authentication
557
If REST applications are supposed to be stateless, how do you manage sessions?
800
Posting a File and Associated Data to a RESTful WebService preferably as JSON
513
Do sessions really violate RESTfulness?
1
How to set a default sorting order for a subpanel in SugarCRM 7
1
SugarCRM SubPanel “load_subpanel” returns false
0
Remove custom module's subpanel in SugarCRM 7.x