Can Nashorn startup slowness be overcome?

I've used Rhino for a scripting component inside graphics. In the project there are about 200 small scripts running independantly. Immediately when starting the application the scripts should be at full speed. Rhino's performance was sufficient, but since Oracle advices to migrate to Nashorn, i'm facing a dilema.

Below a picture showing the load difference between Rhino and Nashorn at approximayely 15,000 invocations of the scripts. The Startup slowness of Nashorn is my biggest issue. 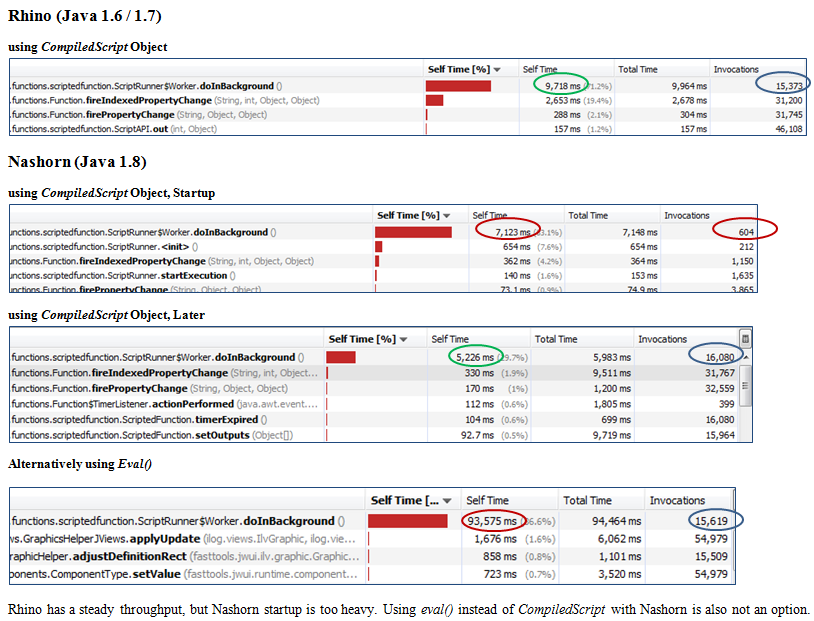 I hope the picture is clear.

This is an outline of how i use the ScriptEngine:

Below i included a runtime profile of how busy the engine is over time;

Does anyone know how to overcome the startup slowness of Nashorn?

UPDATE 15 April '15
Ran the same test with 200 seperate scripts on Java8u45.
Performance is much better! Runs similarly fast as Rhino on Java7.

On Java 1.8, you can use Rhino via the javax.script API by using this Maven dependency and requesting the engine rhino:

If you want the very latest version of Rhino, you can override it by adding something like this:

Incidentally, if you want to use get the latest Rhino on Java 1.7 via javax.script, you should request the engine name rhino17R5 or you might randomly get an instance of the old Rhino which is part of the JRE. The exact engine name required depends on the version of rhino-script-engine. For 1.1.1, it is rhino17R5.

Not the answer you're looking for? Browse other questions tagged java performance rhino nashorn java-8 or ask your own question.

1298
How can you speed up Eclipse?
2694
How can I create an executable JAR with dependencies using Maven?
1504
How can you profile a Python script?
1623
How can I convert a stack trace to a string?
1735
How can I avoid Java code in JSP files, using JSP 2?
2605
How can I fix 'android.os.NetworkOnMainThreadException'?
3537
How can I create a memory leak in Java?
9
How much memory does a Nashorn ScriptEngine use?
53
Should I use a separate ScriptEngine and CompiledScript instances per each thread?