What is the memory consumption of an object in Java?

Is the memory space consumed by one object with 100 attributes the same as that of 100 objects, with one attribute each?

How much memory is allocated for an object?
How much additional space is used when adding an attribute?

Mindprod points out that this is not a straightforward question to answer:

A JVM is free to store data any way it pleases internally, big or little endian, with any amount of padding or overhead, though primitives must behave as if they had the official sizes.
For example, the JVM or native compiler might decide to store a boolean[] in 64-bit long chunks like a BitSet. It does not have to tell you, so long as the program gives the same answers.

Then of course the hardware and OS have multilayer caches, on chip-cache, SRAM cache, DRAM cache, ordinary RAM working set and backing store on disk. Your data may be duplicated at every cache level. All this complexity means you can only very roughly predict RAM consumption.

You can use Instrumentation.getObjectSize() to obtain an estimate of the storage consumed by an object.

To visualize the actual object layout, footprint, and references, you can use the JOL (Java Object Layout) tool.

Typically, references are 4 bytes on 32bit platforms or on 64bit platforms up to -Xmx32G; and 8 bytes above 32Gb (-Xmx32G). (See compressed object references.)

Boxed wrappers have overhead compared to primitive types (from JavaWorld):

Other containers are costly too:

A naïve sum would suggest that an instance of X would use 17 bytes. However, due to alignment (also called padding), the JVM allocates the memory in multiples of 8 bytes, so instead of 17 bytes it would allocate 24 bytes.

It depends on architecture/jdk. For a modern JDK and 64bit architecture, an object has 12-bytes header and padding by 8 bytes - so minimum object size is 16 bytes. You can use a tool called Java Object Layout to determine a size and get details about object layout and internal structure of any entity or guess this information by class reference. Example of an output for Integer on my environment:

So, for Integer, instance size is 16 bytes, because 4-bytes int compacted in place right after header and before padding boundary.

If you use maven, to get JOL:

Each object has a certain overhead for its associated monitor and type information, as well as the fields themselves. Beyond that, fields can be laid out pretty much however the JVM sees fit (I believe) - but as shown in another answer, at least some JVMs will pack fairly tightly. Consider a class like this:

On a 32-bit JVM, I'd expect 100 instances of SingleByte to take 1200 bytes (8 bytes of overhead + 4 bytes for the field due to padding/alignment). I'd expect one instance of OneHundredBytes to take 108 bytes - the overhead, and then 100 bytes, packed. It can certainly vary by JVM though - one implementation may decide not to pack the fields in OneHundredBytes, leading to it taking 408 bytes (= 8 bytes overhead + 4 * 100 aligned/padded bytes). On a 64 bit JVM the overhead may well be bigger too (not sure).

EDIT: See the comment below; apparently HotSpot pads to 8 byte boundaries instead of 32, so each instance of SingleByte would take 16 bytes.

Either way, the "single large object" will be at least as efficient as multiple small objects - for simple cases like this.

It appears that every object has an overhead of 16 bytes on 32-bit systems (and 24-byte on 64-bit systems).

http://algs4.cs.princeton.edu/14analysis/ is a good source of information. One example among many good ones is the following. 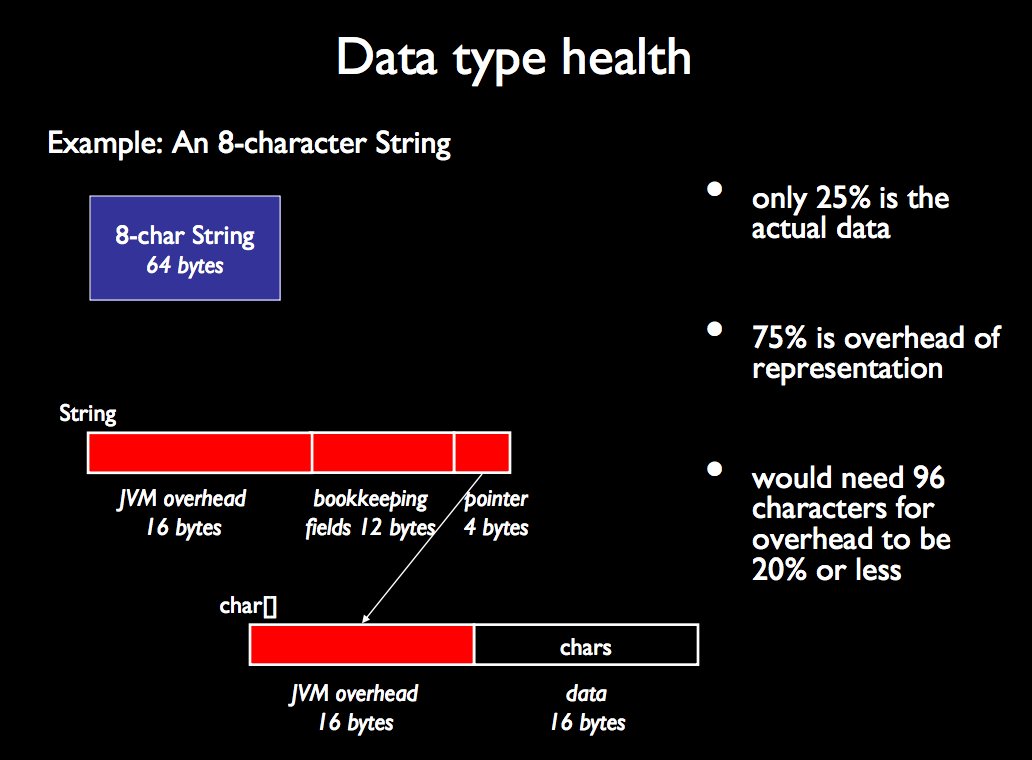 Is the memory space consumed by one object with 100 attributes the same as that of 100 objects, with one attribute each?

How much memory is allocated for an object?

How much additional space is used when adding an attribute?

The runtime has several methods which relate to the memory. The following coding example demonstrates its usage.

No, registering an object takes a bit of memory too. 100 objects with 1 attribute will take up more memory.

The question will be a very broad one.

It depends on the class variable or you may call as states memory usage in java.

It also has some additional memory requirement for headers and referencing.

The heap memory used by a Java object includes

Objects in java also requires some "housekeeping" information, such as recording an object's class, ID and status flags such as whether the object is currently reachable, currently synchronization-locked etc.

Although these are the main memory consumers jvm also requires additional fields sometimes like for alignment of the code e.t.c.

I've gotten very good results from the java.lang.instrument.Instrumentation approach mentioned in another answer. For good examples of its use, see the entry, Instrumentation Memory Counter from the JavaSpecialists' Newsletter and the java.sizeOf library on SourceForge.

In case it's useful to anyone, you can download from my web site a small Java agent for querying the memory usage of an object. It'll let you query "deep" memory usage as well.

no, 100 small objects needs more information (memory) than one big.

The rules about how much memory is consumed depend on the JVM implementation and the CPU architecture (32 bit versus 64 bit for example).

7
What is the memory overhead of an object in Java?
8
How much memory is allocated for one Integer object in Java? How to find out this value for any custom object?
1
How big is an Integer() in Java?
0
Wrapper class RAM
1
In Kotlin, why do each of my Floats occupy 128 bits instead of 16 bits?
0
Best Way To Declare Constants in Java
54
Size of a byte in memory - Java
34
Memory overhead of Java HashMap compared to ArrayList
14
Why is Java's String memory usage said to be high?
13
File size vs. in memory size in Java
See more linked questions

6941
Is Java “pass-by-reference” or “pass-by-value”?
634
In Java, what is the best way to determine the size of an object?
762
How can I measure the actual memory usage of an application or process?
3306
What is the difference between public, protected, package-private and private in Java?
3124
What is a serialVersionUID and why should I use it?
4265
How do I read / convert an InputStream into a String in Java?
3257
When to use LinkedList over ArrayList in Java?
3677
How do I generate random integers within a specific range in Java?
3167
How do I convert a String to an int in Java?
3378
How can I create a memory leak in Java?