What is the “_path” method in ruby on rails?

I'm learning RoR, and I'm getting very confused by the "_path" method as it's used in Controllers and Routes. To be more specific, I'm referring to the many different calls that take the syntax "(something)_path". So far as I know, they all seem to either encode or manipulate a URL or link. I'm having a hard time mastering the use of this type of method because I can't figure out what it's core functionality is supposed to be.

For example, I could use the following code to redirect an old URL structure to a page of listed Tweet instances in my config/routes.rb file:

Only now can I use the following in an .erb file. Notice the "_path" code at the end of the line.

I could also use the following code to create a link to an edit page (and another action) in a different .erb file:

I've tried reading through my study materials as well as the RoR documentation, but I always end up more lost than when I began. Does anybody know the low-level definition of this "_path" method?

It's called a route helper, which means that Rails will generate them to help provide you with resource-based routing structures. I'll explain more in a second

To explain properly - Rails is just a framework.

Like all software, it is a series of files loaded in a particular order. As such, Rails creates a series of helper methods in the booting process. These "helper" methods can then be used throughout your application to call functionality / information as you require:

The Rails framework provides a large number of helpers for working with assets, dates, forms, numbers and model objects, to name a few. These helpers are available to all templates by default.

In addition to using the standard template helpers provided, creating custom helpers to extract complicated logic or reusable functionality is strongly encouraged. By default, each controller will include all helpers. These helpers are only accessible on the controller through .helpers

The route helpers (which are generated from your config/routes.rb file give you the ability to call routes which are resourceful. These might seem strange to begin with, but once you understand them, will help you inexorably.

To give you more clarity - Rails routes are known as resourceful

This means they are constructed around resources. To give you a brief definition of this, you need to appreciate that the resources of your application are the pools of data you can add to, and pull from.

To explain further, because Rails is object orientated. If you're new, this won't mean very much, but keep it in mind, as when you progress through the language / work, you'll begin to see why this is important.

Object orientated programming puts OBJECTS at the center of the flow. Typically, you'd put logic at the center, but with OOP, it's the objects. This is very important for us, as it means that everything you do in Rails is based around the objects you can create.

As per the MVC principle (which, again, is what Rails is built on), you'll create / invoke your objects from your Models: 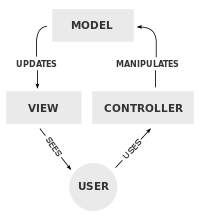 This means that if you want to create a series of routes to "CRUD" (Create Read Update Destroy) your objects, Rails is able to create the routes necessary to do that. This is where the resources directives come from inside the routes file: 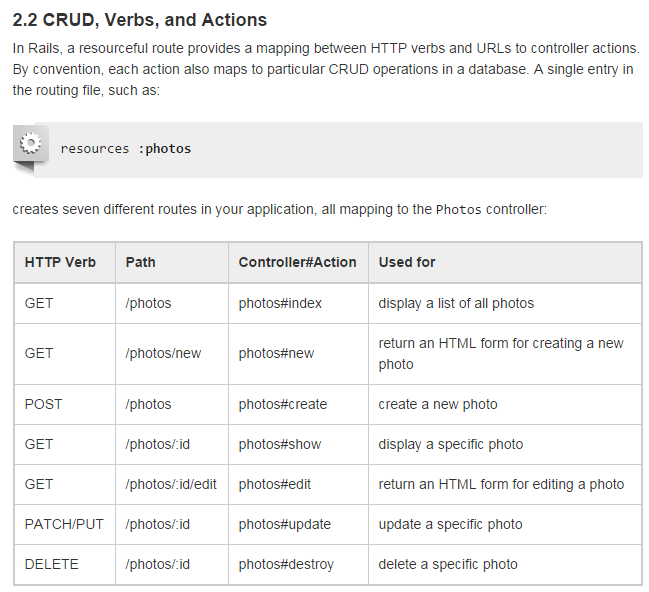 Actually, these paths are generated based on your routes.rb. If you run this command at your project, you would be able to see all available on your app

For example, if I declare my resources in routes.rb like this

then I would automatically have following available paths

If you use some strange abc_path which has not been declared in routes.rb, then you will get errors.

Hope this is helpful, you will definitely need to work more with Rails and then eventually you will understand all of these things :)

you could find definition for these methods in rails repository:

Not the answer you're looking for? Browse other questions tagged ruby-on-rails ruby ruby-on-rails-3 or ask your own question.

804
How to get a random number in Ruby
1171
How to understand nil vs. empty vs. blank in Ruby
1011
Understanding the Rails Authenticity Token
2183
How to write a switch statement in Ruby
1403
How to check if a value exists in an array in Ruby
1513
Rails: How can I rename a database column in a Ruby on Rails migration?
1093
How do I get the current absolute URL in Ruby on Rails?
611
Purge or recreate a Ruby on Rails database
1073
What is attr_accessor in Ruby?
609
How to remove a key from Hash and get the remaining hash in Ruby/Rails?