Is there a way to use [self.view recursiveDescription] in Swift? I am trying to use this method but I am getting the following error:

In order to access private / undocumented Objective-C API (like the -recursiveDescription method on UIView) from Swift you can do the following:

Now you can set a breakpoint and print out the recursive description in LLDB:

If you want to display the view hierarchy in lldb, you do not have to add any categories or bridging headers or anything like that. When debugging Objective-C code, one would generally use the following command at the (lldb) prompt:

If, though, you've paused in a Swift frame, lldb may expect a Swift expression. You can, though, explicitly tell expr (the po abbreviation is actually calling expression) which language the expression is in:

The same patterns occur in iOS 8, when viewing the view controller hierarchy, using:

or, in Swift frame:

In WWDC 2018 Advanced Debugging with Xcode, they suggest getting yourself away from this complicated expr syntax by defining an alias, poc, by creating a text file, ~/.lldbinit with the following line:

), offering a more interactive way to analyze the view hierarchy, largely eliminating the need for the LLDB recursiveDescription of the view hierarchy. For more information see WWDC 2016 video Visual Debugging with Xcode. Admittedly, sometimes we end up having to fall back to the recursiveDescription technique shown above, but most of the time the view debugger makes this a far more natural, intuitive process.

And in Xcode 9, they've expanded this view debugger so it now includes the relevant view controllers, too: 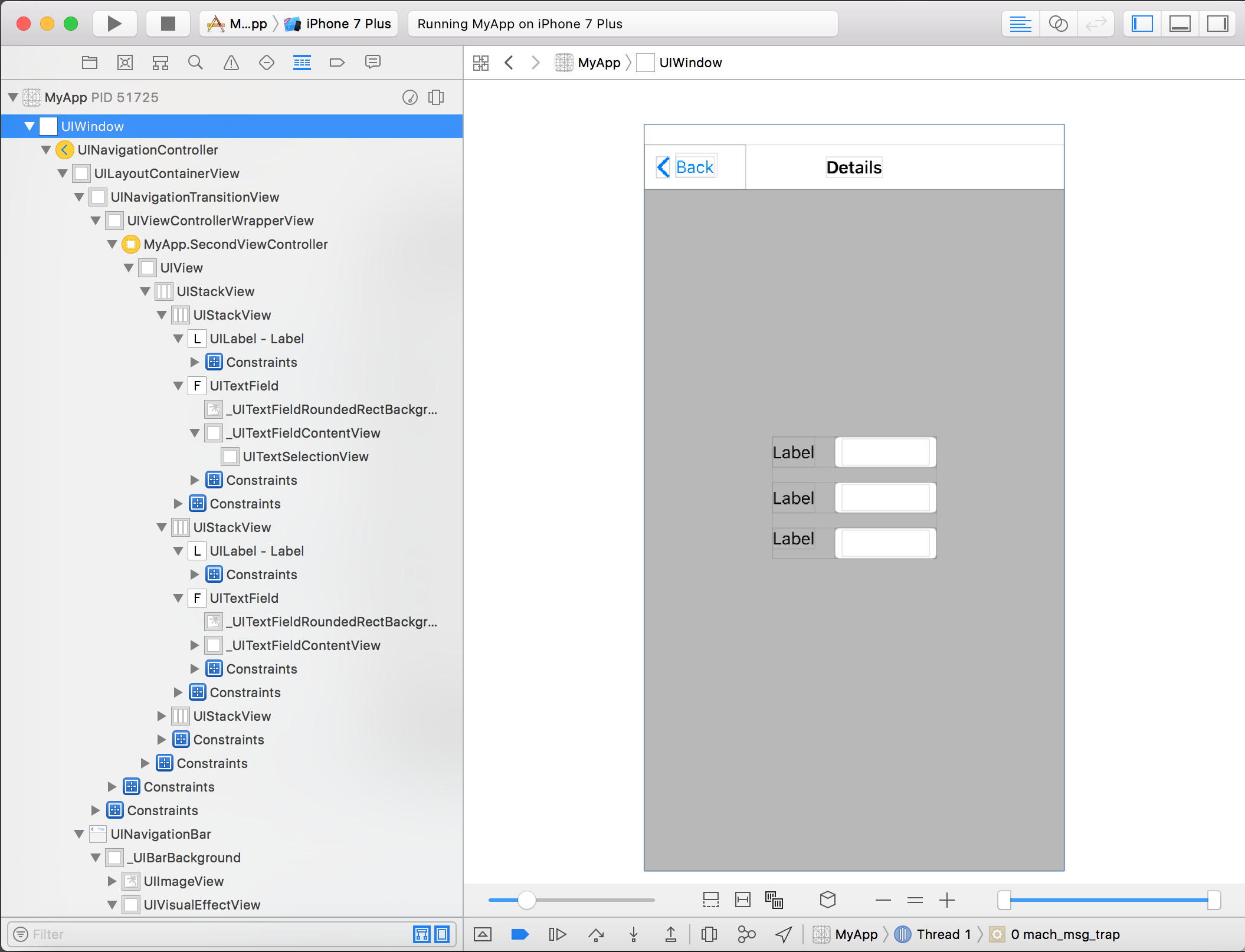 First add a category @interface without @implementation in your bridging header.

then in your console

The key here is as NSString not as String

Recursive description only exists for debugging purposes. It's not part of the public API and so isn't available to Swift

And Swift is a strict language and doesn't allow you to call functions that haven't been strictly defined.

Objective-C, it's a dynamic language so you can call functions like this.

-O, tell the debugger that we also want the debug description the same as po would do and -- to indicate that there are no more options.

We need to put put [self.view] view in back ticks.

Back ticks is like a preproccess step that says first, evaluate the contents of this in the current frame and insert the result, and then we can evaluate the rest.

My answer is taken from WWDC 2018 Session 412 advanced debugging with Xcode and lldb.

Add to the bridging header a declaration of a category of UIView with that method.

Not the answer you're looking for? Browse other questions tagged ios uiview swift ios8 uiview-hierarchy or ask your own question.

0
No visible @interface for 'UIWindow' declares the selector 'recursiveDescription'
0
Is it possible to detect all segues that are associated to a particular View Controller on Swift?

1206
Xcode - How to fix 'NSUnknownKeyException', reason: … this class is not key value coding-compliant for the key X" error?
671
@selector() in Swift?
525
What does an exclamation mark mean in the Swift language?
494
How would I create a UIAlertView in Swift?
578
Using a dispatch_once singleton model in Swift
941
Swift Beta performance: sorting arrays
488
How to check if an element is in an array
399
Does swift have a trim method on String?
378
How does String substring work in Swift
486
The use of Swift 3 @objc inference in Swift 4 mode is deprecated?