Xcode 6 and Embedded Frameworks only supported in iOS8

When using an embedded framework (dyld) in Xcode 6.0.1 with deployment target less that iOS 8 I get:

For some time I was thinking that this is my problem as well, but for normal apps (non-iOS-8-extension) you just need to change one build setting in your casual Xcode 6 iOS Universal Framework target (set Mach-O Type to Static Library):

There should be no problem with iTunes Connect and iOS 7 after that :)

So, after digging around I came out with the solution

Supposed to have yours MyEmbeddedFramework.framework to add to the app, do this

So to recap, to make it works you should see MyEmbeddedFramework.framework in

It worked fine on iPhone5/iOS8 not on iPhone4S/iOS7 where I get:

The problem was in the EmbeddedFramework. I had to

1) Set Architecture to default 2) Set Valid Architectures to: armv7, armv7s and armv64 (as Apple suggests armv64 is needed to have Embedded Frameworks working).

Anyways when submitting to iTunesConnect I get some errors for the Minimum Required Version:

As of right now there is no way to use an embedded framework to share code between an app and widget and have it run on iOS 8 as well as iOS 7 & previous.

Here's some more reading on that http://atomicbird.com/blog/ios-app-extension-tips

If you are sharing code between an app and an extension, one nice way to do so is to create your own embedded framework to hold the code. On iOS 8 it'll load dynamically for both cases, so you're set.

If you still support iOS 7 (or earlier), it's not so clear cut. Embedded frameworks don't work there. The App Extension Programming Guide breezily notes that you can use dlopen to deal with this. With that approach you write code to load the framework dynamically at run time rather than rely on iOS loading it for you, if you've verified that the code is running on a version of iOS that supports doing so.

But how do you use that code on iOS 7? You don't. If your shared code is in an embedded framework, there's no way to execute it on iOS 7. It's just unavailable.

The dlopen approach might be handy if you only need the shared code on iOS 8. If you need it on iOS 7, you'll need to include it in the app target. And once you do that, you have no need of the framework. You could still use a framework for the app extension, but doing so is not actually useful. You'd be doing the work of creating the framework but not getting any benefit from it. Just include the shared code in both targets.

At the end of the file (search for 8.1) , there would be Begin XCBuildConfiguration section

Look for your framework.

In out case even though the deployment target was set to 7.1 via Xcode -> general in target settings, the entry in the file had 8.1 for both debug & release

Now we don't get error just a warning (but works on iOS 7.1 device) : ld: warning: embedded dylibs/frameworks only run on iOS 8 or later

This looks like an xcode bug which incorrectly sets different ios targets and then causes error.

Going deeper on Apple Documentation I found out about dlopen command, which is used to make the linking of the libraries on some conditions, depending on system versions and libraries supported.

dlopen example of use: Is the function 'dlopen()' private API?

So let's look at the solution provided by Apple Docs:

Deploying a Containing App to Older Versions of iOS

The mechanism that lets you do this is the dlopen command, which you use to conditionally link and load a framework bundle. You employ this command as an alternative to the build-time linking you can specify in the Xcode General or Build Phases target editor. The main idea is to link embedded frameworks into your containing app only when running in iOS 8.0 or newer.

If your containing app target links to an embedded framework, it must include the arm64 architecture or it will be rejected by the App Store.

Certain iOS APIs use embedded frameworks via the dlopen command. You must conditionalize your use of these APIs just as you do when calling dlopen directly. These APIs are from the CFBundleRef opaque type:

And from the NSBundle class:

In a containing app you are deploying to versions of iOS older than 8.0, call these APIs only within a runtime check that ensures you are running in iOS 8.0 or newer, and call these APIs using Objective-C.

We tried running the latest code on the following configurations:

The App is working fine on all the three devices but the warning is present in the Xcode while compiling . "embedded dylibs/frameworks only run on iOS 8 or later”

Also I tried to Archive the App in order to submit it to the app store it went on fine.

Also, found out a link where in an apple developer stated this to be a bug https://devforums.apple.com/message/999579#999579

Just for the record... I had this issue when changing a project from iOS8 to iOS7 deployment type.

The app used cocoapods and no custom embedded frameworks.

Changing Mach-O Type to static (from above answer).

Then on the cocoapods project. Under each sub pod project changing the Mach-O type to static, leaving the main pod Project Mach-O setting to blank.

I set the Mach-O Type to EXECUTABLE and it worked for me. Setting it to Static, Dynamic or Bundle created other errors when I ran it.

I solve this problem following way : Use same deployment target in both target "Embedded Framework" and "main App" target.

So, temporary, i said no to dynamic library, while many devices on iOS 7. How i solved my problem. I was need lib for transferring model between app and extension. So, i put my model to JSON string into shared container. And it works like a charm.

When you use dynamic library on ios you must code signed the library. In the Xcode 6, you should select the "Code Sign On Copy". And with the Xcode5, you should sign the library by your self with run script. like :

Remove the use frameworks! from your PodFile if you want the Framework to work in iOS 7.0. i.e. run pod deintegrate command, modify your PodFile and then rerun the pod install command

Also after this, I had to add all the .h file's of the Framework in the Bridging file, that fixed the issue. Also remove the import TestLibrary from the swift files 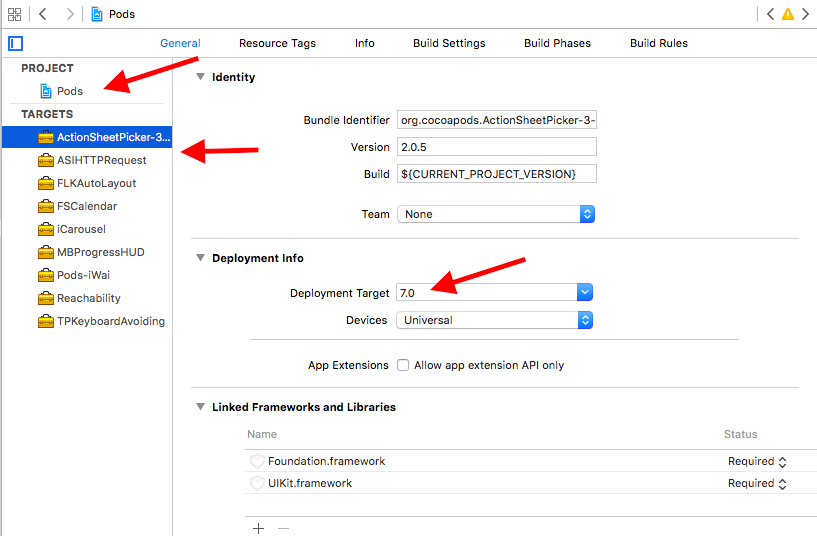 I was running into an issue where i needed to include some libraries as embedded frameworks otherwise i received the above error and when I did just that, I received errors when submitting to the app store.

My solution was to use Pods and make sure you uncomment the "use_frameworks!" line.

Not the answer you're looking for? Browse other questions tagged objective-c ios8 dylib dynamic-library or ask your own question.