I just had to re-clone a .git repository for one of my projects in Zend Studio 11, and now every time I switch branches in the repository, I get an error in Zend telling me "An internal error occurred during: Detecting Library Folders".

It seems as though one of the Zend settings files has been deleted or something.

Any idea how to restore this file, or fix this error? 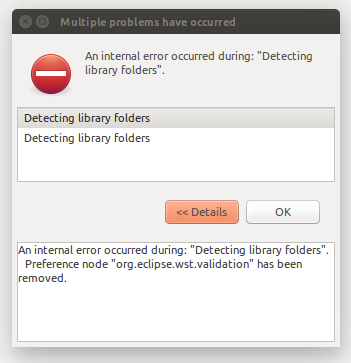 I figured out the solution. As it turns out I was on the right track. Zend creates a hidden folder called .settings when you create a project.

For some reason, although it was included in the .gitignore file, it was deleted when switching between branches and resetting the base at one time.

I had tried removing the entire database and re-cloning earlier but that did not work. The reason was due to the .project (also Zend created project file) file being committed into the repository, and when re-cloned, Zend saw that file and assumed it was an existing project.

I had to remove the .project file completely as well.

I ended up deleting the project from zend and re-creating it. It solved the problem.

Not the answer you're looking for? Browse other questions tagged php eclipse git zend-framework zend-studio or ask your own question.

1012
Git workflow and rebase vs merge questions
551
Remove local git tags that are no longer on the remote repository
1204
.gitignore for Visual Studio Projects and Solutions
1952
"Debug certificate expired" error in Eclipse Android plugins
1150
How to revert uncommitted changes including files and folders?
1
Creating a New PHP Project from GIT in Zend Studio 9
1336
What should be in my .gitignore for an Android Studio project?
45
An internal error occurred during: "Updating Maven Project". Preference node "org.eclipse.wst.validation" has been removed
2443
Git is not working after macOS Update (xcrun: error: invalid active developer path (/Library/Developer/CommandLineTools)