What is a Key-Value Pair? [closed]

I am teaching myself Java so I can program android applications and came across the need to use a key value pair, but don't know what it is.

What I am confused about is how this is different from a normal variable. Say a variable of type String points to an object or int variable points to int value. Isn't that variable a "key", and the object a "value?

However, it is more common to talk about key-value pairs in the context of a mapping, i.e. a (mathematical) function which maps from a key to the corresponding value or values. Depending on the properties of this mapping, you may constrain the set of key-value pairs. For example, for a 1-to-1 mapping, you need the keys in the set to be unique.

Is this the same as an array?

Well ... an array could be considered as a mapping from a set of indexes (integers) to values. But a mapping is more general. And in Java, arrays have other properties that distinguish them from Maps ... and they have a much simpler, faster, and less memory-hungry implementation.

(Note that in some languages, there is no "array" data type per-se. Instead, the primitive is a "hash" or an "associative array" ... which is a more general map.)

And is a key always a string?

No. A key can be any type. (It is generally a bad idea to use a mutable type as a key, especially if your mapping is implemented using one of the standard Map types in Java. However, even that can work in some circumstances.)

Say a variable of type String points to an object or int variable points to int value. Isn't that variable a "key", and the object a "value"?

No. Or at least, not in a static language like Java. The thing that distinguishes a key-value pair from a variable binding is that the "key" object is data, and hence can take different values. By contrast, a variable's name is hard-wired in the source code of your program: you can't change it at runtime.

(In some dynamic languages, you can create new variables dynamically (at runtime), and for such languages you could argue that variables are key-value pairs in a mapping that represents the scope ... at some point in the program's execution. But Java isn't like that ...)

A key-value pair is two values usually connected in such a way that the value is accessed using the key. They are commonly used in various data-structures to provide fast access to values. Check out hashtable data structure for instance (in Java, you can take a look at HashMap or Hashtable)

For example, let's say we have a structure CartoonCharacter holding the mentioned pairs like: 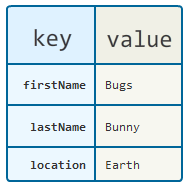 So if you want to get the value Bunny you would access it through the key lastName.

Not the answer you're looking for? Browse other questions tagged java key-value or ask your own question.

10
Content security policy in React app didn't block online script
1
How to automatically add the ordinal number of an entry based on timstamp to a row when non-contiguous new data is added to it in Google Sheets?
0
Is there a way I can break up into more than 2 classes

2449
What is reflection and why is it useful?
4181
What are the differences between a HashMap and a Hashtable in Java?
7491
Is Java "pass-by-reference" or "pass-by-value"?
1823
Sort a Map<Key, Value> by values
3526
What is the difference between public, protected, package-private and private in Java?
3311
What is a serialVersionUID and why should I use it?
2270
How to get an enum value from a string value in Java
2578
How do I determine whether an array contains a particular value in Java?
2204
What is a JavaBean exactly?
747
How to update a value, given a key in a hashmap?