I am trying to run a Swift app on my iPhone 4s. It works fine on the simulator, and my friend can successfully run it on his iPhone 4s. I have iOS 8 and the official release of Xcode 6.

Below is the error in entirety

For me none of the previous solutions worked. We discovered that there is an "Always Embed Swift Standard Libraries" flag in the Build Settings that needs to be set to YES. It was NO by default!

After setting this, clean the project before building again.

For keen readers some explanation The most important part is:

set the Embedded Content Contains Swift Code (EMBEDDED_CONTENT_CONTAINS_SWIFT) build setting to YES in your app as shown in Figure 2. This build setting, which specifies whether a target's product has embedded content with Swift code, tells Xcode to embed Swift standard libraries in your app when set to YES.

Surprisingly enough, all i did was "Clean" my project (shift+cmd+K) and it worked. Did seem to be related to the certificate though.

I started getting this error when I removed:

from Runpath Search Paths in my build settings. Replacing it fixed everything up again (thank goodness for source control!)

I don't know how it got there, but it appears to be needed for a binary to find its embedded Swift runtime.

For the device, you also need to add the dynamic framework to the Embedded binaries section in the General tab of the project. 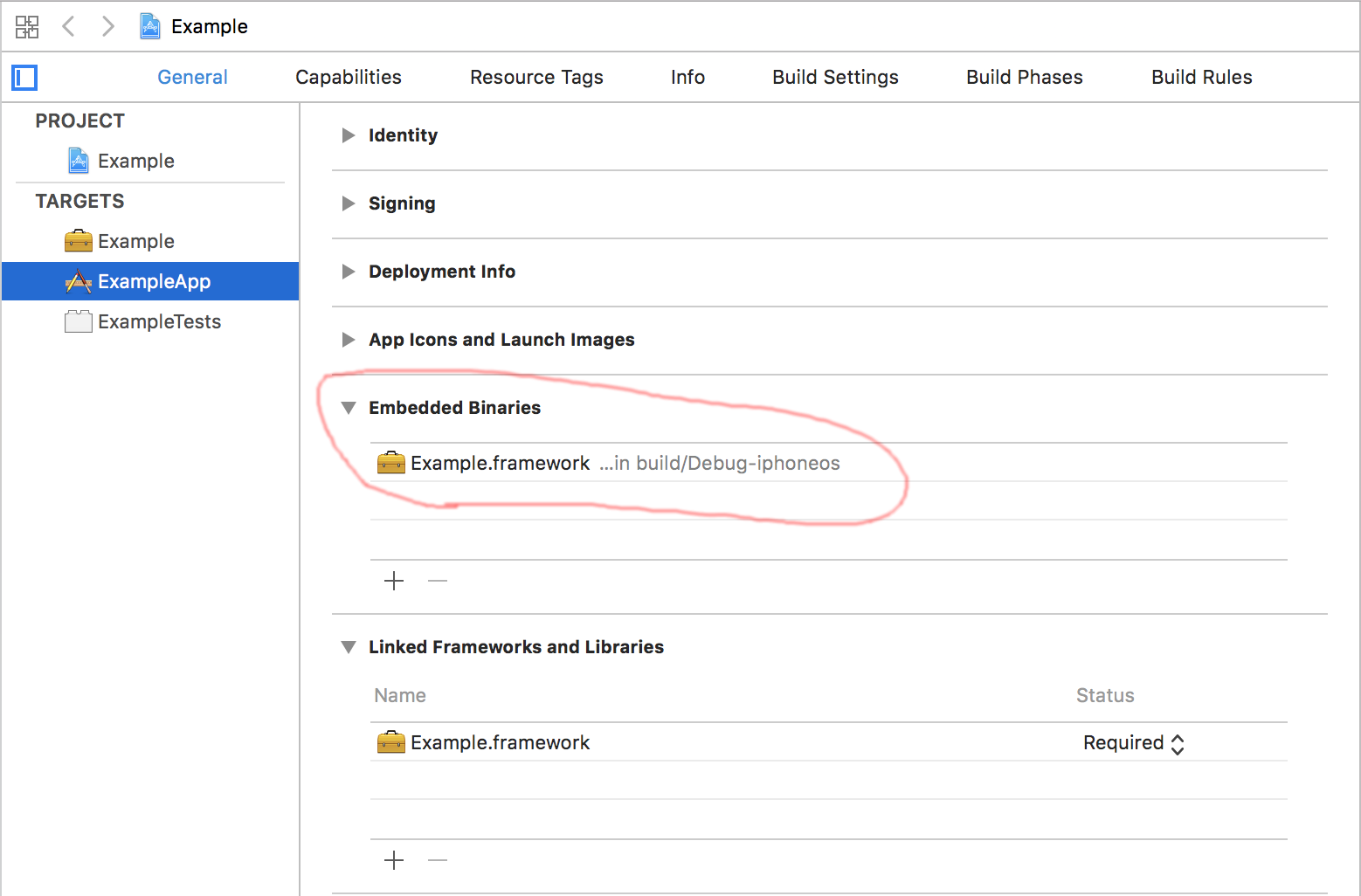 In Xcode 8 the option for Embedded Content Contains Swift Code option is no longer available.

It has been renamed to "Always Embed Swift Standard Libraries = YES"

Created a clean react-native project and saw /usr/lib/swift as an entry in Runpath Search Paths.

After adding that, my project finally ran without crashing!

Nothing helped from what was suggested before.

I think it's a bug when certificates are generated directly from Xcode. To resolve (at least in Xcode 6.1 / 6A1052d):

OK, sharing here another cause of this error. It took me a few hours to sort this out.

In my case the trust policy of my certificate in Keychain Access was Always Trust, changing it back to defaults solved the problem. 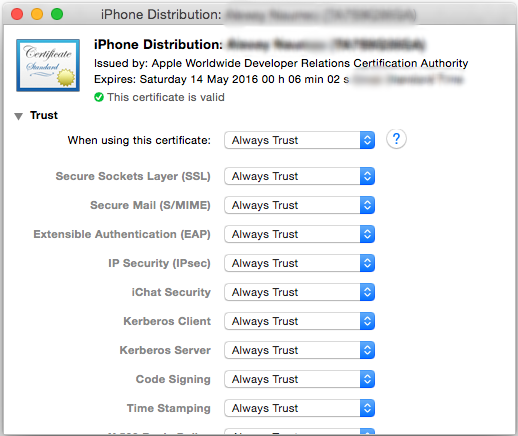 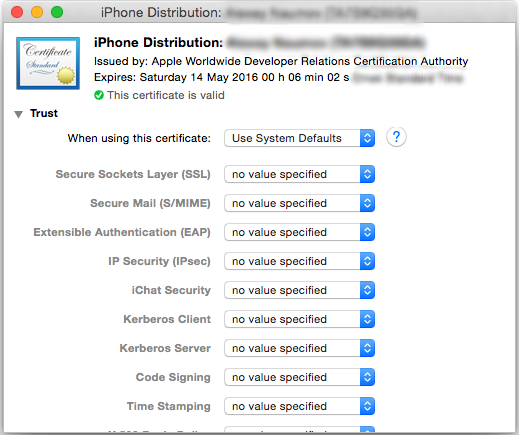 This issue occurs again in Xcode 10.2. You must download and install the following package from Apple. It provides Swift 5 Runtime Support for Command Line Tools.

You have to set the Runpath Search Paths to @executable_path/Frameworks as showed in the following screenshot of Build Settings:

If you have any embedded frameworks made in Swift, than you can set to YES the Build Options Embedded Content Contains Swift Code.

I think Apple has already summarized it under Swift app crashes when trying to reference Swift library libswiftCore.dylib

Q: What can I do about the libswiftCore.dylib loading error in my device's console that happens when I try to run my Swift language app?

A: To correct this problem, you will need to sign your app using code signing certificates with the Subject Organizational Unit (OU) set to your Team ID. All Enterprise and standard iOS developer certificates that are created after iOS 8 was released have the new Team ID field in the proper place to allow Swift language apps to run.

Usually this error appears in the device's console log with a message similar to one of the following:

The new certificates are needed when building an archive and packaging your app. Even if you have one of the new certificates, just resigning an existing swift app archive won’t work. If it was built with a pre-iOS 8 certificate, you will need to build another archive.

As the AirSign guys state the problem roots from the missing OU attribute in the subject field of the In-House certificate.

I have an enterprise development certificate, creating a new one solved the issue.

Let's project P is importing custom library L, then you must add L into 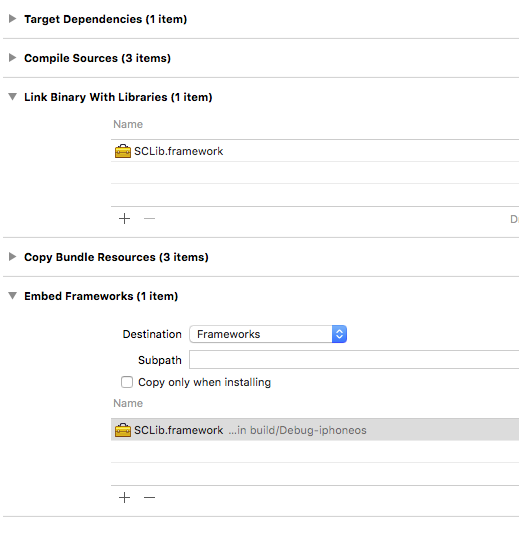 The most easy and easy to ignored way : clean and rebuild.

This solved the issue after tried the answers above and did not worked.

I was having the same problem after moving to a new mac, and after hours, trying all the suggested answers in the questions, none of this worked for me.

The solution for me was installing this missing certificate. http://developer.apple.com/certificationauthority/AppleWWDRCA.cer

This error message can also be caused when upgrading Xcode (and subsequently to a new version of Swift) and your project uses a framework built/compiled with an older/previous version of Swift.

In this case rebuilding the framework and re-adding it will fix the problem.

Change Copy Pods Resources for the target from:

I solved by deleting the derived data and this time it worked correctly. Tried with Xcode 7.3.1GM

After having tried out everything, I finally found out, that the build seems not always include every detail again and again. Maybe for speeding up the process... In order to ensure WHOLE packaging before running on a device, make a Clean first: Shift-Cmd-K. Then build with: Cmd-B. After that run it on your device. Easy. Kind regards to all you nice guys in that place!

In my case, it was just the name of my target :

I renamed it like this : MyApp.something and the same issue appeared. But I saw in the build Settings window, my product module name has been changed like this MyApp-something. So, I removed the dot in my target name (MyAppSomething) and the issue was gone.

For me, having tried everything with no success, what worked was to remove @executable_path/Frameworks from the Packaging section (don't know how it came to be in there in the first place)

We tried each and every reasonable suggestion on this thread.

Nothing worked. Code runs fine on new devices, and crashes on iOS<=12

It seems that swift is so smart, that even if you set it to "ALWAYS_EMBED_SWIFT_LIBRAIES"="YES" it does not include the swift libraries.

What actually solved the problem for us is to include a dummy swift file in the project. The file must contain calls to dispatch, foundation libraries.

Apparently this hints mighty-xcode to force include the libraries, but this time for real.

Here is the dummy file we added that made it work:

For unity, also add project.AddBuildProperty(target, "SWIFT_VERSION", "Swift 5"); to your post processing for creating the xcode project.

None of the solutions worked for me. Restarting the phone fixed it. Strange but it worked.

none of these solutions seemed to work but when I changed the permission of the world Wide Developer cert to Use System defaults then it worked. I have included the steps and screenshots in the link below

I would encourage you to log the ticket in apple bug report as mentioned here as Apple really should solve this massive error: https://stackoverflow.com/a/41401354/559760

What worked for me in Xcode 11 was going to General -> Frameworks, Libraries, and Embedded Content and changing the "Embed" option for the framework in question to "Embed & Sign"

Xcode 7.2, iOS 9.2 on one device, 9.0 on other. Both had the error. No idea what changed that caused it, but the solutions above for the WWDR were correct for me. Install that cert and problem solved.

There are lot's of answers there but might be my answer will help some one.

I am having same issue, My app works fine on Simulator but on Device got crashed as I Lunches app and gives error as above. I have tried all answers and solutions . In My Case , My Project I am having multiple targets .I have created duplicate target B from target A. Target B works fine while target A got crashed. I am using different Image assets for each target. After searching and doing google I have found something which might help to someone.

For me building a MacOS command line Swift app that depended on 3rd party Swift libs (e.g. SQLite) none of the above solutions seemed to work. What did work was directly adding the following path to my Runpath Search Paths in the Build Settings:

Anyway, that'll do for me even if it doesn't seem right - my app is just a utility that I'm not intending to distribute and at least it runs now!

I started getting this similar error for testing adding S3 file using AWS services. Below was the error. dyld: Library not loaded: @rpath/AWSAutoScaling.framework/AWSAutoScaling

I searched a lot and above solutions are also not helpful for me. Below link helped me to solve this issue.

Which says to fix this issue by re-downloading the WWDR (Apple Worldwide Developer Relations Certification Authority).

Not the answer you're looking for? Browse other questions tagged ios swift xcode dyld or ask your own question.