I have a problem with merging PDF files using iText. I am using the PdfCopyFields class to do the merging yet, the signatures of existing PDF files are not merged properly. It seems that some data in the dictionary of the merged PDF file are incorrect.

It is obvious that although the resulting PDF has 4 signatures (which i know are PDF fields), it seems that these signature-fields reference the signature data of the wrong document.

Moreover, when i open the merged pdf file with a text editor, i look at the 'header' of the PDF file and find only 2 Signature entries (instead of 4). This means that the actual signatures in the pages reference only those 2 signatures, thus the mix-up.

PS: i can post sample PDF files to reproduce the error, but the simplest ones will do the job (i created 2 PDF files with MS Word and stamped each page separately)

That might happen if the names of the signature fields in the documents coincide. Multiple PDF fields with the same name are considered multiple visualizations of the same field. The merge process may throw away duplicate values in that case.

I'm not sure, though, whether that is the case for your files. If you want to know, please share them.

Having inspected the sample files it becomes clear that indeed the problem is caused by the identical signature field names in the merged documents:

Merging result in MERGED-PDF.pdf which has

Because the whole PDF is considered a single form, a form field name can only have a single associated value.

Thus, merging multiple fields with the same name from the two source documents into a single fields with multiple widgets (as PdfCopyFields seems to do) is a sensible action to take.

By merged properly I assume you mean they still had their original, differing values. This in turn indicates that that service did not merge the fields as described above.

But this is not more proper than what PdfCopyFields does, it is dumber because the value of the field Signature1 now is unclear, just like the value of Signature2.

The proper thing to do if you want to keep the differing values of the source fields with duplicate names, is to rename such duplicate fields in the course of the merge. (If the online PDF merge service did this, too, it was not dumb. But you did not indicate any change in field names...)

You can find sample code for a merge of documents with their fields renamed in iText in Action chapter 6 Working with existing PDFs example ConcatenateForms2.java:

Obviously you can tweak this by only renaming signature fields. This would merge other fields with "normal" form content but leave signatures as they are.

As an afterthought, flattening the signature fields before merging might be an alternative approach. The visual representation remains but the verification failure messages are gone because nothing is verified anymore.

cannot be implemented without completely invalidating the signatures, at least those from all but one document. Have a look here for an introduction to integrated PDF signatures. Especially note how multiple integrated signatures in the same document work: 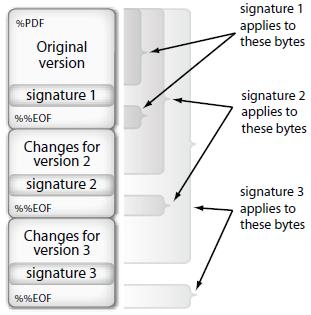 Thus, a merge is impossible without breaking at least some of the signatures.

The OP uses an iText version 4.2.0. In current iText versions (5.5.x) much of the form aware logic has been moved from PdfCopyFields to PdfCopy. If you use such a version or a newer one, try and use PdfCopy.

The result of the merge above will be utterly invalid in PDF-2, not merely because of the invalid signatures themselves but because of the signatures with multiple appearances. You might want to reconsider the behavior of the Pdf*Copy* class family concerning signature fields.

Not the answer you're looking for? Browse other questions tagged itext or ask your own question.