I am playing around with Nodejs and express by building a small rest API. My question is, what is the good practice/best way to set the code status, as well as the response data?

Let me explain with a little bit of code (I will not put the node and express code necessary to start the server, just the router methods that are concerned):

The code below works perfectly, and when sending a request with Postman, I get the following result: 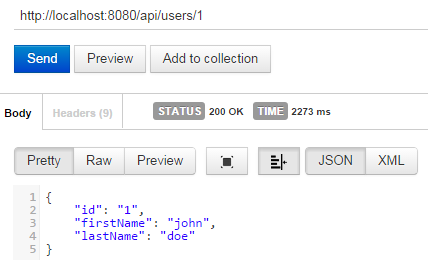 As you can see, the status shows 200, which is OK. But is this the best way to do this? Is there a case where I should have to set the status myself, as well as the returned JSON? Or is that always handled by express?

For example, I just made a quick test and slightly modified the get method above:

As you can see, if the user is not found in the array, I will just set a status of 404.

Resources/advices to learn more about this topic are more than welcome.

In short, you just have to call the status method before calling json or send:

You could do it this way:

This will set the HTTP status code to 400, it works even in express 4.

status of 200 will be the default when using res.send, res.json, etc.

Then have my error middleware send the response, and do anything else I need to do when there is an error.

The good-practice regarding status response is to, predictably, send the proper HTTP status code depending on the error (4xx for client errors, 5xx for server errors), regarding the actual JSON response there's no "bible" but a good idea could be to send (again) the status and data as 2 different properties of the root object in a successful response (this way you are giving the client the chance to capture the status from the HTTP headers and the payload itself) and a 3rd property explaining the error in a human-understandable way in the case of an error.

I am using this in my Express.js application:

The standard way to get full HttpResponse that includes following properties

On backend, do this

On Frontend e.g. in Angular, just do:

The best way of sending an error response would be return res.status(400).send({ message: 'An error has occurred' }).

Then, in your frontend you can catch it using something like this:

You could do this

If you are using iisnode to run nodejs through IIS, keep in mind that IIS by default replaces any error message you send.

This means that if you send res.status(401).json({message: "Incorrect authorization token"}) You would get back You do not have permission to view this directory or page.

This behavior can be turned off by using adding the following code to your web.config file under <system.webServer> (source):

res.sendStatus(status) has been added as of version 4.9.0

you can use one of these res.sendStatus() || res.status() methods

below is difference in between res.sendStatus() || res.status()

I hope someone finds this helpful thanks

I don't see anyone mentioned the fact that the order of method calls on res object is important. I'm new to nodejs and didn't realize at first that res.json() does more than just setting the body of the response. It actually tries to infer the response status as well. So, if done like so:

The second line would be of no use, because based on the correctly built json express/nodejs will already infer the success status(200).

7
handling error response from express to react
3
What's the best way to deal with an error in the server side and in the client side using nodejs + express
0
Proper way of handling errors and sending JSON back for API
0
Axios.post returning :ERR_EMPTY_RESPONSE after form submit with formidable
0
Express JS redirect to form with invalid email
0
NodeJs express error middleware parsing

628
Understanding REST: Verbs, error codes, and authentication
564
Proper way to return JSON using node or Express
181
Rest with Express.js nested router
2
Why this error coming while running Node.js server?
1
Node/Express - use API JSON response to (server-side) render the app
0
What to do when NodeJS rest api is sendind status 404 while using parameters?
2
How can I dix this Node.js login page?