Xcode: Any way to refresh/re-run the playground?

The Playground in Xcode automatically updates as you type, but I can't figure out how to get the Playground to "re-compile".

In many cases this wouldn't matter, but if you're writing code that generates or uses random values it can be useful to run it a few times to make sure it's working. Is there any way to get the playground to reset / refresh / re-run?

Seen a few questions asking how to stop the Playground from auto-updating, but nothing for the opposite.

Easiest way to do this seems to be to just edit the code (add and remove a space), or put in some kind of a loop... Just wondering if there's a menu shortcut etc.

I don't know what Reset Playground is, by the way.

If you hover over the button a small black triangle will appear in the bottom corner of the button. If you long press on the button the menu in the screenshot below will appear, where you can change the execution mode of the playground between automatically or manually running. If it's automatic, then it should run once every time you make a change (unless you make a change while it's running, then it will interrupt itself and run again). If it's manual then you have to press the button to run the playground.

While running the button is a hollow square, like a stop button on a VCR. Pressing it will stop the execution.

When it's not running it is a blue triangle, like a play button on a VCR. Pressing it will run the playground. 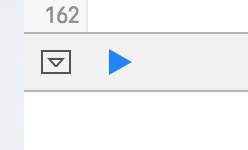 Also, you can create your shortcuts.

It is empty as a default, but you can assign anything.

In Xcode 10.1 there is a "Run Playground" command in the "Editor" menu which can be accessed via the following keyboard shortcut:

As in Xcode version 10.2 the "Execute Playground" command in the "Editor" menu has been replaced by "Run Playground" and has a shortcut by default ⌘+ SHIFT + ENTER

The reason why it doesn't refresh when you enter the same command again, is because Playground is already running. You first need to stop the Playground by either clicking on the stop button or entering your own shortcut as I did.

To do so go in

and look for "Stop Playground". 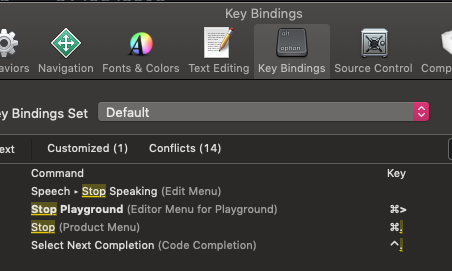 Add the shortcut you would like to use clicking in the empty field on the right. I entered:

In this way you can use the default shortcut to run the playground and you use the custom shortcut to stop it. Once stopped you can run it again.

Here in the menu: 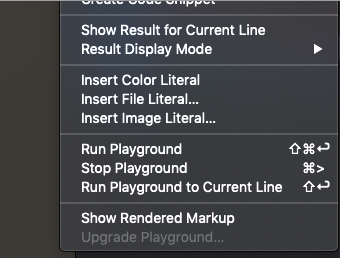 Not the answer you're looking for? Browse other questions tagged ios swift refresh xcode6 swift-playground or ask your own question.

420
Refresh image with a new one at the same url
1286
Xcode - How to fix 'NSUnknownKeyException', reason: … this class is not key value coding-compliant for the key X" error?
281
Xcode : failed to get the task for process
554
Any way to replace characters on Swift String?
0
Xcode 6 beta 3 doesn't recognize things defined in the Cocoa module swift
3
Xcode 6 Beta 5 Swift Playground: Cannot find symbol for CGRectMake()
28
Xcode 6 - Prevent swift playground refresh
467
Getting error "No such module" using Xcode, but the framework is there
3
Xcode 8.2 Playground not showing UIKit results