I am using Xcode 6 (GM, I didn't download betas), and I am developing apps for iOS 7+. For all my projects, I just opened the same projects I used to work on in Xcode 5.

In the Breakpoint navigator, I have the All Exceptions breakpoint on. It is set to Break: On Throw. Now, each time I run my app (whether on a device or in simulator), it stops execution on the line return UIApplicationMain(argc, argv, nil, NSStringFromClass([AppDelegate class])); in the main() function.

If I press Play to continue program execution twice, the program runs fine. So this doesn't prevent me from working, but it is annoying to have to manually play the execution each time and reset my editors.

I like the behaviors I have set up in Xcode (taking the current editor to where the execution has paused), and having that All Exceptions breakpoint is important IMO. (So I don't want to change those)

By running the same code, with the same environnements, for an iOS 7 target (again, device or simulator), the exception is not thrown.

Any clue what could cause this strange behavior?

As stated in the comments, you should turn off catching the C++ exceptions by editing your All Exceptions breakpoint.

In order to do that, right click on your breakpoint and change Exception from All to Objective-C: 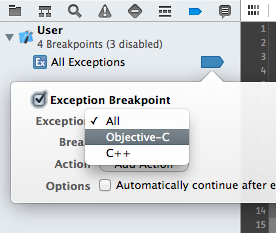 Exceptions in C++ code are part of normal app functionality. However, exception breakpoint is not catching unhandled but every raised exceptions, even when they're handled correctly later on, hence the stop in execution.

TLDR; In my case the cause of problem was missing fonts.

I also had this problem. While @Johnnywho is correct that leaving Exception Breakpoint for Objective-C only, stops the unwanted behaviour, it still does not explain what is the real cause, why does it run without exception on iOS7 and why does this happen only on some projects.

That's why I went on and dissected one of my projects in which I had this problem, until the point where I was able I found the cause. I suppose that there could be more than one cause for this behaviour, but in my case that was missing custom fonts.

Quick way to test it:

So my conclusion is that on iOS8 the missing fonts cause C++ exception while on iOS7 they don't, hence the breakpoint trigger.

Similar exception (and breakpoint trigger) can also be caused by incorrectly written font file name in Info.plist file under the key "Fonts provided by application".

Just summarized previous answers which helped me to fix it.

Problem: When you add custom font and then apparently delete (replace) it, somewhere in project is still his reference and the breakpoint stops several times at main C++ lib breakpoint stops in iOS 8.

1) Find in project and delete (replace) all references to those fonts. Might in some nibs, submodules, etc…

2) If you can’t fix everywhere (e. x. read-only libs use them) or problem still exists after solution 1 , add those old fonts back to project

Xcode 9, sometimes there are exceptions that are thrown but iOS is catching it gracefully. This will help 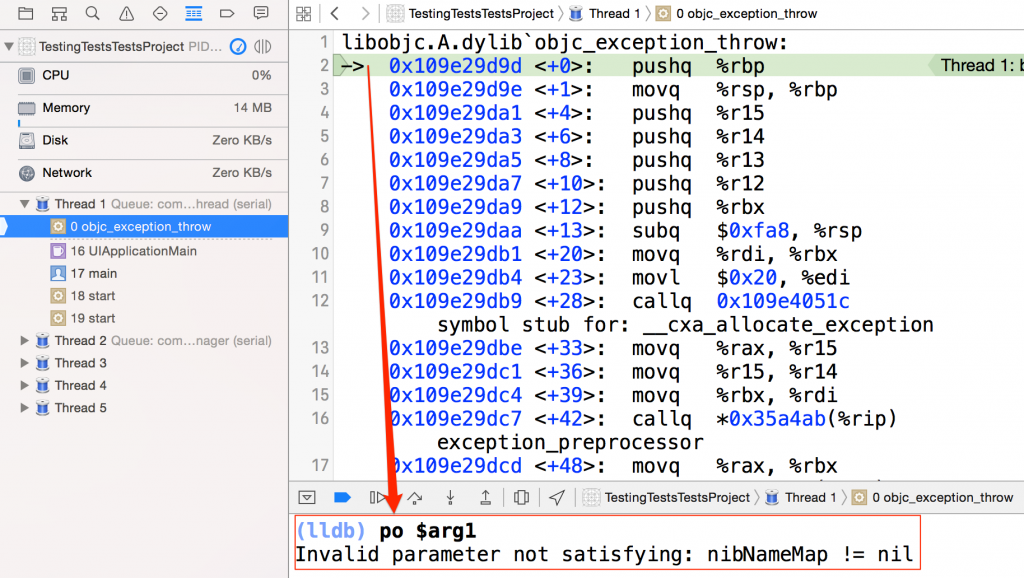 for my case, it was a user-defined attribute in nib

I had a same issue, the issue was i have added some interface files from other project which has different font in it. Just find them and remove.

Not the answer you're looking for? Browse other questions tagged objective-c xcode ios8 xcode6 or ask your own question.