how to show all package dependency tree

Since 0.9.3 I'm having some problems with meteor package dependencies, for example some third party packages don't declare all of their dependencies (like underscore, which would normally be included but not when used by another package).

Is there a simple way to show the tree of dependencies, much like npm does?

.meteor/versions will show all packages but I'm trying to find out what is including (or not) other packages.

currently I'm getting errors like the following, but haven't included Minimongoid afaik and grepping finds no reference to it.

While we're waiting for the official tools to have this functionality, here's the uglyslow vershion:

This will show the dependencies of all added packages. It parses the output of meteor list and meteor show package@version and will break when anything there changes.

The pull request was contributed by sdarnel and can be found here for those interested: https://github.com/meteor/meteor/pull/8936

I ran meteor list, and copied the output to notepad, to refer back to later.

Then... if you take the packages in "Implies: foopackage", and run "meteor show foopackage" that will tell you that dependency's dependencies.

Basically, this is a crude solution to this problem which there is no official solution/feature/command for.

I wrote some code here to build up a package tree, and make pictures like this: 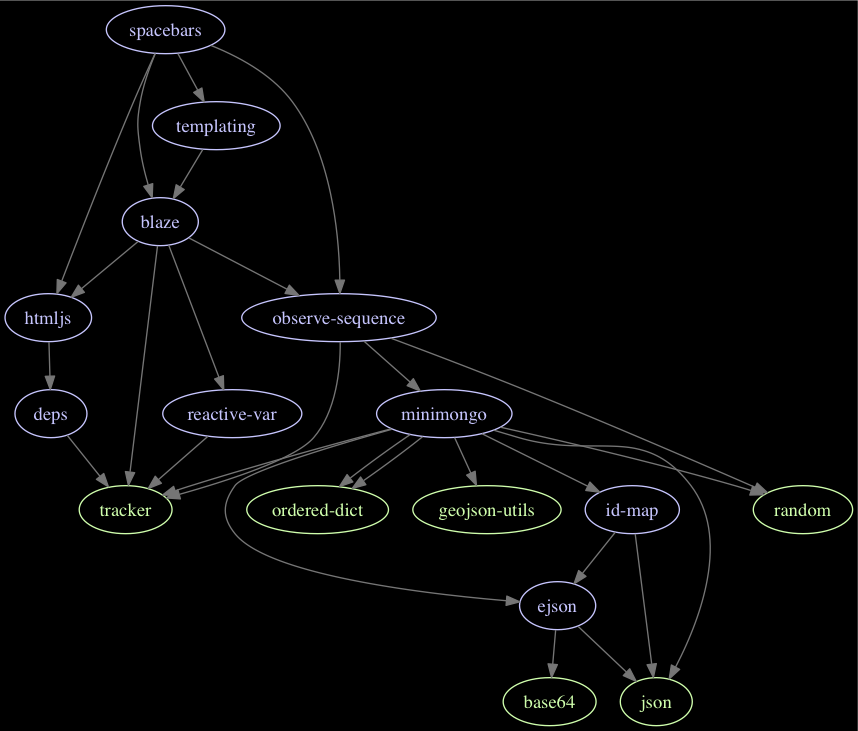 It worked on the raw source code of the meteor distribution, so it'd need some tweaking to work on an actual app (and I cant help with that at the moment), but it'd be a start...

Not the answer you're looking for? Browse other questions tagged meteor packages or ask your own question.