How to set java_home on Windows 7?

I went to the Environment Variables in 'System' in the control panel and made two new variables, one for user variables and one for system variables. Both were named JAVA_HOME and both pointing to

But for some reason, I still get the below error when running a Java command...

How can I fix this problem?

First you need to know the installation path for the Java Development Kit.

Open the default installation path for the JDK:

Once you have the JDK installation path:

The complete article is here, on my blog: Setting JAVA_HOME Variable in Windows.

You have to first Install JDK in your system.

Once you have the JDK installation path: 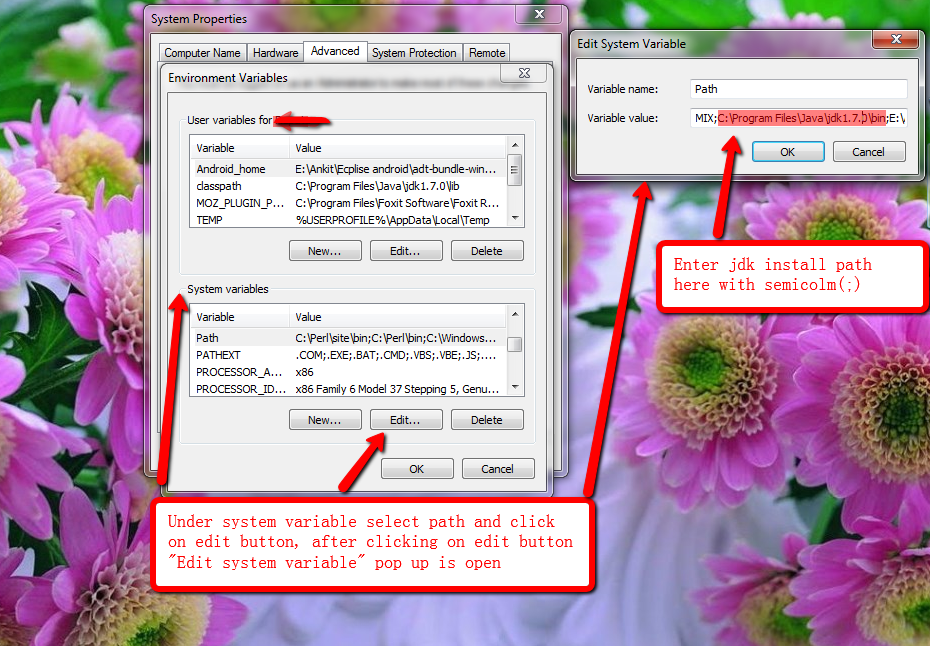 In cmd (temporarily for that cmd window):

You need to set it to C:\Sun\SDK\jdk (Assuming that is where the JDK is installed - It is not the default) - Do not put the \bin in C:\Sun\SDK\jdk\bin.

If your app only runs when you are logged in as the current user then put it in the user variables - If it needs to run for all users on your system then put it in System variables.

You might also need to add %JAVA_HOME%\bin to the path also (Also it depends on whether you run it from just the user or from all users, including System)

Or when you execute Java you can add that command line switch to the command:

One Image can fix this issue.

If you're on a 64-bit version of Windows and you've installed the 32-bit JDK, besides adjusting PATH variables, you may need to adjust registry variables, too.

I was pulling my hair out, having correctly set my PATH variables -- still to no avail -- and then only finding "vacated" Java entries in my registry, seemingly a deadend of fixing the "misfiring" Java Runtime Environment.

Within that key, you should find subkeys of different Java versions installed (past and/or present). Click on the subkey of the latest version (my subkey is currently 1.7.0_25, for example). After clicking on that subkey, you'll see registry string values listed on the right, and particularly, JavaHome and RuntimeLib. You need to modify the values of those two values to reflect the both the current folder and jvm.dll file, respectively.

Again, this will depend entirely on both what version of Java (JDK and/or JRE) you have installed -- 32 or 64-bit -- and what type of operating system you're on -- 32 or 64-bit. Just know that they're reflected in different locations within the registry (like the Wow6432Node for 32 bit applications, in my case with the 32-bit JDK installed on a 64-bit machine).

Now that I've updated those two registry values, my program runs flawlessly, with no more hiccups or complaints about a missing Java Runtime Environment (stemming from the registry).

This is the official solution for setting the Java environment from www.java.com - here.

There are solutions for Windows 7, Windows Vista, Windows XP, Linux/Solaris and other shells.

Use case 1: Compiling from CMD

So for instance, if you are not using any IDE software, and you just want to be able to compile from the CMD, independent of your current working directory, then what you want is to set the Path variable correctly. In your case, you don't even need the JAVA_HOME variable. Because CMD is using Path, not JAVA_HOME to locate the Java compiler.

Use case 2: Compiling from IDE

However, if you are using some IDE software, then you have to look at the documentation first of all. It may require JAVA_HOME to be set, but it may also use another variable name for the same purpose. The de-facto standard over the years has been JAVA_HOME, but this may not always be the case.

Use case 3: Compiling from IDE and CMD

If in addition to the IDE software you also want to be able to compile from the CMD, independent of your current working directory, then in addition to the JAVA_HOME variable you may also need to append the JDK search path to the Path variable.

Path variable is used universally across all operating systems. Because it is defined by the system, and because it's the default variable that's used for locating the JRE, there is almost never any problem running Java applications. Especially not on Windows where the software installers usually set everything up for you. But if you are installing manually, the safest thing to do is perhaps to skip the JAVA_HOME variable altogether and just use the Path variable for everything, for both JDK and the JRE. Any recent version of an IDE software should be able to pick that up and use it.

Symbolic links may provide yet another way to reference the JDK search path by piggybacking one of the existing environment variables.

I am not sure about previous versions of Oracle/Sun JDK/JRE releases, but at least the installer for jdk1.8.0_74 appends the search path C:\ProgramData\Oracle\Java\javapath to the Path variable, and it puts it at the beginning of the string value. This directory contains symbolic links to the java.exe, javaw.exe and javaws.exe in the JRE directory.

So at least with the Java 8 JDK, and presumably the Java 8 JRE standalone, no environment variable configuration needs to be done for the JRE. As long as you use the installer package to set it up. There may be differences on your Windows installation however. Note that the Oracle JRE comes bundled with the JDK.

If you ever find that your Java JDK configuration is using the wrong version of the compiler, or it appears to be working by magic, without being explicitly defined so (without casting the spell), then you may have a symlink somewhere in your environment variables. So you may want to check for symlink.

close and reopen the command prompt after setting JAVA_HOME. Sometimes changes does not reflect in the cmd opened before setting the JAVA_HOME.

Use the search feature to make sure your latest Java installation is listed; then make sure it is the one that is checked. This should be a JDK not a JRE.

While adding your Java directory to your PATH variable, you might want to put it right at the beginning of it. I've had the problem, that putting the Java directory at the end of the PATH would not work. After checking, I've found java.exe in my Windows\System32 directory and it looks like the first one wins, when there are several files with the same name in your PATH...

That solved my problem. I'm still digging for the logic behind it.

if you want to make a portable java and set path before using java, just make a batch file i explained below.

if you want to run this batch file when your computer start just put your batch file shortcut in startup folder. In windows 7 startup folder is "C:\Users\user\AppData\Roaming\Microsoft\Windows\Start Menu\Programs\Startup"

note: java_home and path are variables. you can make any variable as you wish. for example set amir=good_boy and you can see amir by %amir% or you can see java_home by %java_home%

After hours of work around most of the solutions here, the problem was solved for me just by installing 32-bit JDK.

You may wanna look into Windows/System32 folder for the following files: - java.exe - javaw.exe - javaws.exe

Because, the path variable is including these files, you can get a headache trying to figure out why the java -version or javac -version keeps pointing to the old JAVA_HOME: rename those files, take out the extension with an underscore, for instance. And then, you only will have to create the JAVA_HOME variable, add it to the path variable (e.g., %JAVA_HOME%) and append the "\bin" particle. This way you need to only change the JAVA_HOME variable pointing to different JRE or JDK and have multiple installations of java just by setting JAVA_HOME.

This also means that it is better to install Java manually, without an installer, so you are able to toy with it.

0
Maven not running with Java 10: Files\Java\jdk-10""=="" was unexpected at this time
2
Android Studio Java JDK environment path
0
Jenkins and maven JAVA_HOME not found in your environment
0
run-nifi.bat : The JAVA_HOME environment variable is not defined correctly
0
JAVA_HOME not visiable in system variables
1
Cannot see older java version
1
the Terminal of Android Studio can't work
-2
JAVA_HOME variable not setting in Windows
-2
how to change java -version on windows to show Java 1.9
0
How do I set JAVA_HOME for libGDX?
See more linked questions

3830
How do I efficiently iterate over each entry in a Java Map?
2569
How do I call one constructor from another in Java?
4560
How do I read / convert an InputStream into a String in Java?
3965
How do I generate random integers within a specific range in Java?
17
Ant + Vista 64 : "Unable to locate tools.jar" (jre/jdk conflict?)
4
Ant is using the JRE instead of JDK, although the environment variables are set
3403
How do I convert a String to an int in Java?
3620
How can I create a memory leak in Java?
128
How can I change Mac OS's default Java VM returned from /usr/libexec/java_home