I am trying to draw the Dominica Flag (not to be confused with dominican flag) using python turtle. I currently have everything in the code except for the bird (which I have no idea how to do either). I also can't seem to figure out how to get 10 stars to show up properly inside the red circle with NO LINES inside the stars. It would be great if I could get some tips on how to center the stars inside the circle as well as how I would go about drawing the bird in the middle. Thanks!

Here is an image of it: 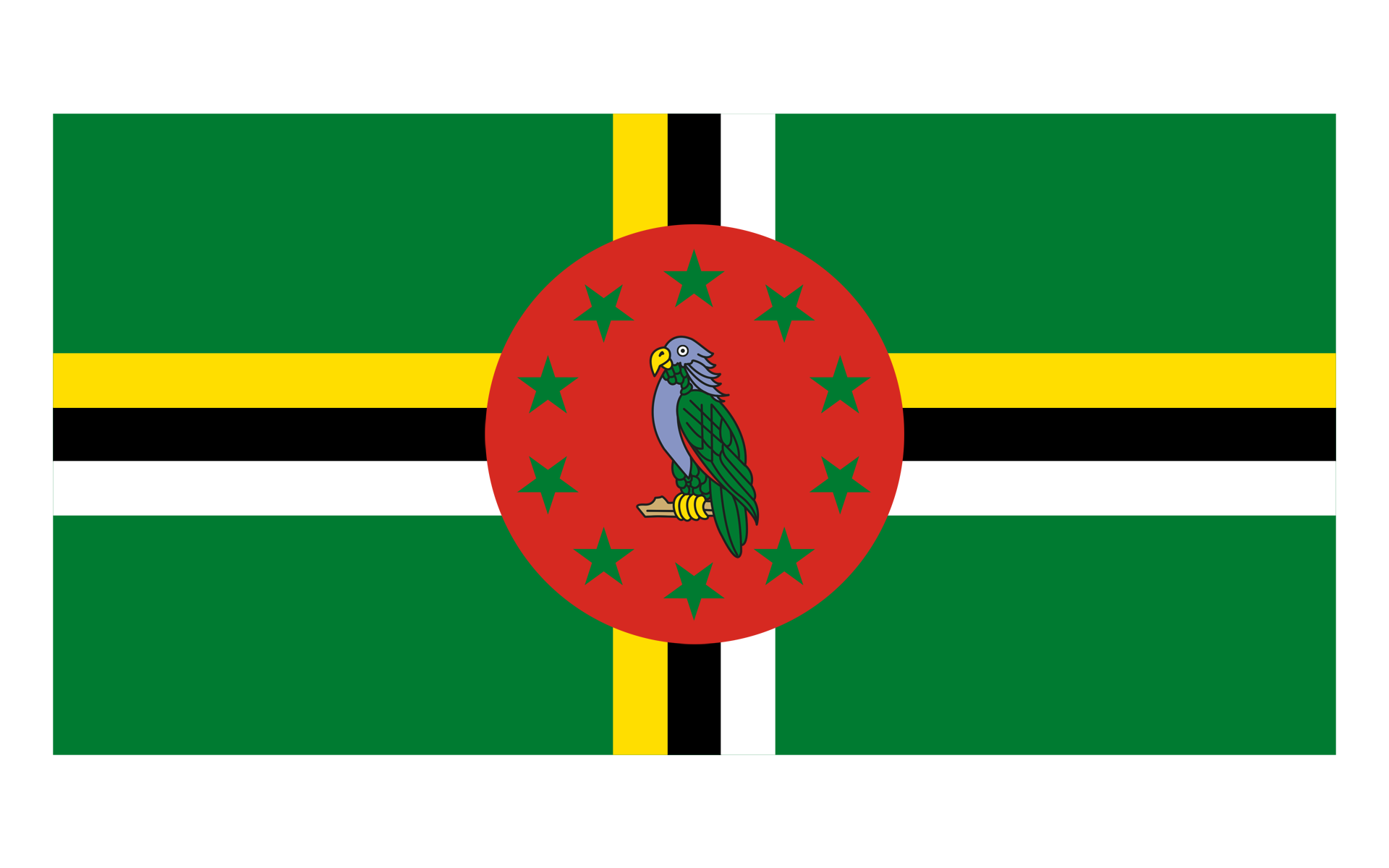 Here is the code I have so far:

Is this homework, or something you're doing for your own self-learning? Either way, drawing that parrot is not going to be easy! The SVG that twotwotwo linked uses over 40 distorted ellipses and about 30 linear paths; I guess it was created in a vector drawing program (eg Inkscape).

Even if you aren't familiar with SVG that file may still be useful to you. Since it's from Wikipedia, I assume it's a good representation of the current official Dominica flag, so the sizes, positions, and colours of the elements should be fairly accurate.

Here are some of the colours from that file:

The turtle module understands colours in that format.

Now, onto your current problems.

I haven't used turtle graphics for many years, but you inspired me to install tkinter so that I could tinker with your code. The first problem I noticed was alex.left(35) in makeStars(), that should be 36, since 360°/10 = 36°.

I tried various things to get the star circle correctly centred, and the stars aligned properly, but after an hour or so of frustration I gave up on the simple drawing commands. I'm sure it'd be a breeze for a turtle expert, but I decided on a slightly more trigonometric approach.

Due to the way the turtle module does filling, there's no easy way to draw filled stars. Some vector drawing systems have alternate fill modes to get around that problem, but turtle doesn't appear to do so. So you either have to fill in the centre of the star with a pentagon, or draw the star as a 10 sided polygon.

I have written some code that draws the filled stars properly centered and aligned. The sizes in my code aren't exactly the same as those in the SVG, but they're quite close. I'm happy to post my code here if this is for your own self-learning exercise. OTOH, if this is for homework I probably shouldn't post the whole thing...

PS. It makes it easier to read code if you define all your functions first, and then call them at the bottom of your program (preferably inside a main() function). Interspersing the function calls with the function definitions is a bit messy.

Not the answer you're looking for? Browse other questions tagged python python-3.x turtle-graphics or ask your own question.

1445
What's the canonical way to check for type in Python?
3238
How to get the current time in Python
1209
How to get the filename without the extension from a path in Python?
1147
Why do people write #!/usr/bin/env python on the first line of a Python script?
1296
Referring to the null object in Python
1105
What is the use of “assert” in Python?
1395
What is the Python 3 equivalent of “python -m SimpleHTTPServer”
812
Using Python 3 in virtualenv
2
Make Python turtle window size same as canvas size