I've got a new server running Windows Server 2012 RS and IIS 8.5.
I've installed SQL Server 2014 Express and was having problems getting sites under IIS to connect to (initially placeholder) databases. In an effort do get the Visual Studio 2010 Shell to display the debug information, I ran subinacl as per this question (How do I fix an "Invalid license data. Reinstall is required." error in Visual C# 2010 Express?) but now SSMS itself no longer launches! When I try to launch it I get a box saying:

The underlying Visual Studio 2010 Shell was reporting this when I was trying to debug the original issue but now SSMS is saying that right on launch.

I've uninstalled and reinstalled SSMS but the problem still exists. I've installed Visual Studio 2012 Express to see if that fixes the license issue, but it didn't. Any advise would be appreciated. 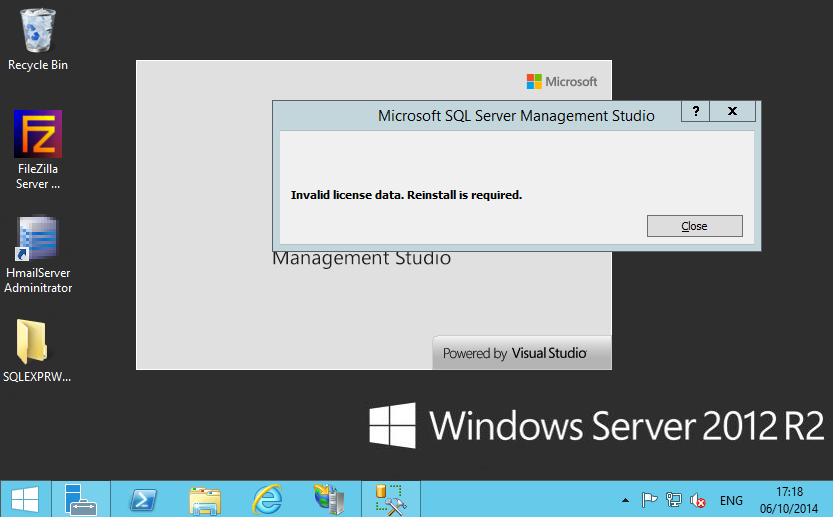 I found the solution to this issue here: Technet - SQL 2012 - Invalid License Data

Basically it involves these two steps:

Not the answer you're looking for? Browse other questions tagged ssms windows-server-2012-r2 sql-server-2014-express or ask your own question.

32
How do I fix an "Invalid license data. Reinstall is required." error in Visual C# 2010 Express?