AndroidManifest in androidTest directory being ignored

I'm trying to test using the following directory structure (which was setup by Android Studio): 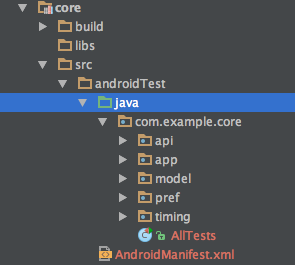 Unfortunately, this doesn't work. I'm still getting the following error when I run one of my tests:

I've tried setting the package to be com.example.core.test in my AndroidManifest.xml file (since that is what it shows up as in my Settings->Apps list), but with no joy.

I'm thinking it's not even recognizing the AndroidManifest.xml file, since the version number doesn't show in the Settings for the test app, either.

How can I inject the correct permissions for my test project?

I needed to do something similar. I created a folder named "debug" next to androidTest, which corresponds to the debug variant of the app, and put an AndroidManifest.xml with the permission in that folder. Then the permission works under test since the test app uses the debug variant. It's not ideal because it blurs the line between test and debug, which aren't quite the same thing.

I think what's happening is that the permissions in androidTest/AndroidManifest.xml are going to the test app, not the target app, although it's not 100% clear to me if there are actually two different APKs or what.

In older versions of Android Studio and the Android Gradle plugin the androidTest/AndroidManifest.xml file was ignored. This was documented at the tools.android.com site at the time.

If you still run into issues or are just debugging manifest related testing issues try this (Adapt this slightly for Windows):

A couple of extra notes:

As specified here, during instrumented tests, there are generated two .apk files. If you take a look, the smaller one it's most probably the one named app-debug-androidTest-unaligned.apk and it actually does include the provided permissions.

Inspecting the file with aapt d permissions <apk_file_path>.apk can be useful to see a list of all of them.

Now, there might be an issue with the context itself where the permission is requested. I had a similar problem, trying to write some screenshots on SD card (thus needing the WRITE_EXTERNAL_STORAGE permission).

This answer helped me to fix the problem, although I cannot fully understand why it's necessary.

In few words, you'll need to declare the same android:sharedUserId in both manifests, in order to merge the permissions when both apks are installed on the same device - that happens when tests are running. This helped me to separate permissions needed just for testing from the one in production.

This is a known problem.

This is reported here: https://issuetracker.google.com/issues/127986458 and here there is the issue created by one of the Roboelectric maintainers.

The workaround as described here its near the same proposed by user3286293 and currently is the only way to have the manifest merged for testing purposes.

You need to define that in build.gradle file:

This will create a new instrumented main application which has all extra permissions required for test application.

Not the answer you're looking for? Browse other questions tagged android unit-testing junit or ask your own question.

30
How can I add additional Android permissions for my UI test project only?
12
androidTest AndroidManifest.xml ignored
13
How to make android:usesCleartextTraffic="true" only for instrumentation tests?
4
Change manifestPlaceholders in androidTest manifest
1
Set androidTest.apk version code
1
Internet access in Instrumented Test