Emacs paredit-mode -- how to correct unbalanced parenthesis in yanked code?

Occasionally I yank code into a paredit-mode buffer that is missing a closing parenthesis or bracket. paredit-mode then detects the unclosed expression and tries to add the missing paren in the wrong place. This is frustrating when I move the cursor to the point where I want the close paren but I can't put it there. I end up having to switch off paredit-mode. 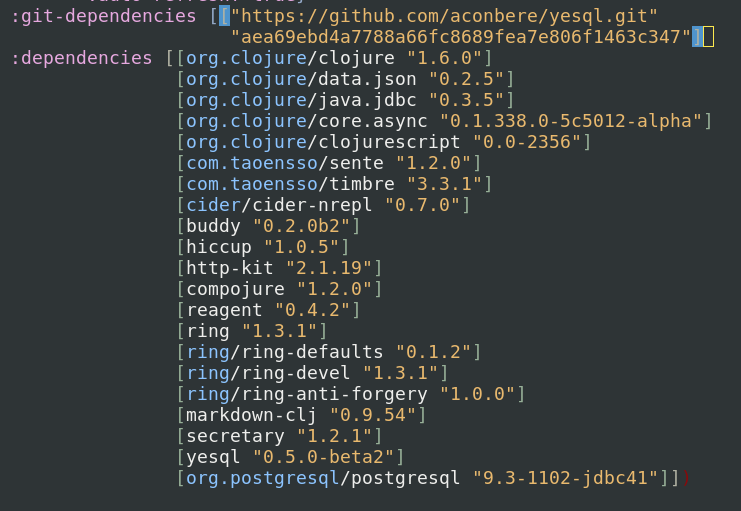 but paredit-mode sees a missing ) at the very end (in red). I'm not even sure why it wants to use a close parens when the opening is a bracket. Typing ] at the point makes the cursor jump to the end and try to fill in the red paren. Slurping or barfing don't have the intended effects and simply move the ) around.

Is there any way to fix this without temporarily disabling paredit-mode?

kill-region (bound by default to C-w) and quoted-insert (bound by default to C-q) are unaffected by paredit mode. You can delete regions or insert matching delimiters using these keybindings, bypassing paredit rules. Remember that you can also turn off paredit, clean something up, and then turn it back on again.

Others have already mentioned C-q for quoted-insert. You can also use C-u DEL or C-u C-d to override paredit's normal balanced behavior of DEL and C-d for a single deletion:

Trust me. By far the easiest is to paste a bracket or parentheses.

and then copy it

Same idea as noisesmith said differently. Turning paredit on and off is not an option :)

Not the answer you're looking for? Browse other questions tagged emacs clojure paredit or ask your own question.

355
How do I control how Emacs makes backup files?
88
A gentle tutorial to Emacs/Swank/Paredit for Clojure
417
How can I reload .emacs after changing it?
6
Emacs Clojure mode without paredit
6
Using Paredit to wrap existing expression
39
How to delete extra parens in Paredit mode?
298
How can I make nrepl-ritz-jack-in work remotely over TRAMP / Emacs
6
How to add / remove parenthesis around a marked region in Emacs?
1
Emacs - Load ParEdit Mode on Startup
0
How to barf double quotes