I have a line chart based on a simple list of numbers. By default the x-axis is just the an increment of 1 for each value plotted. I would like to be a percentage instead but can't figure out how. So instead of having an x-axis from 0 to 5, it would go from 0% to 100% (but keeping reasonably spaced tick marks. Code below. Thanks!

The code below will give you a simplified x-axis which is percentage based, it assumes that each of your values are spaces equally between 0% and 100%.

It creates a perc array which holds evenly-spaced percentages that can be used to plot with. It then adjusts the formatting for the x-axis so it includes a percentage sign using matplotlib.ticker.FormatStrFormatter. Unfortunately this uses the old-style string formatting, as opposed to the new style, the old style docs can be found here. 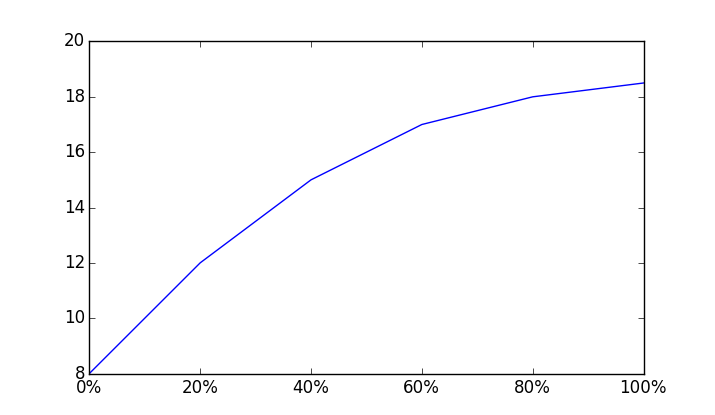 This is a few months late, but I have created PR#6251 with matplotlib to add a new PercentFormatter class. With this class you can do as follows to set the axis:

This will display values from 0 to 5 on a scale of 0% to 100%. The formatter is similar in concept to what @Ffisegydd suggests doing except that it can take any arbitrary existing ticks into account.

PercentFormatter() accepts three arguments, max, decimals, and symbol. max allows you to set the value that corresponds to 100% on the axis (in your example, 5).

Note that this formatter will use whatever ticks would normally be generated if you just plotted your data. It does not modify anything besides the strings that are output to the tick marks.

PercentFormatter was accepted into Matplotlib in version 2.1.0.

Totally late in the day, but I wrote this and thought it could be of use:

156
Format y axis as percent
2
Seaborn: How to add a "%" symbol after each value in the X axis of a plot, not converting the value to a percentage?

2078
Calling a function of a module by using its name (a string)
3485
Using global variables in a function
329
Reverse Y-Axis in PyPlot
3675
Iterating over dictionaries using 'for' loops
537
setting y-axis limit in matplotlib
1420
Save plot to image file instead of displaying it using Matplotlib
497
pyplot scatter plot marker size
1
Python axhline, title and axis labels