How do I find the width & height of a terminal window?

As a simple example, I want to write a CLI script which can print = across the entire width of the terminal window.

In bash, the $LINES and $COLUMNS environmental variables should be able to do the trick. The will be set automatically upon any change in the terminal size. (i.e. the SIGWINCH signal)

It will print the number of rows and columns, or height and width, respectively.

Or you can use either cut or awk to extract the part you want.

To do this in Windows CLI environment, the best way I can find is to use the mode command and parse the output.

I hope it's useful!

On POSIX, ultimately you want to be invoking the TIOCGWINSZ (Get WINdow SiZe) ioctl() call. Most languages ought to have some sort of wrapper for that. E.g in Perl you can use Term::Size:

As I mentioned in lyceus answer, his code will fail on non-English locale Windows because then the output of mode may not contain the substrings "columns" or "lines": 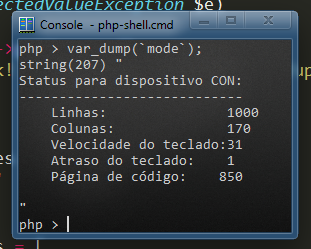 You can find the correct substring without looking for text:

Note that I'm not even bothering with lines because it's unreliable (and I actually don't care about them).

Edit: According to comments about Windows 8 (oh you...), I think this may be more reliable:

Do test it out though, because I didn't test it.

Inspired by @pixelbeat's answer, here's a horizontal bar brought to existence by tput, slight misuse of printf padding/filling and tr

Getting the window width

This shell code makes a global variable $TERM_SIZE track the size of the terminal window:

It tries stty size before falling back to assuming that the terminal is 25 lines high and 80 characters wide. POSIX does not mandate the size operand for stty`, so the fallback is needed.

You can then access the columsn argument by using the shell's limited string substitution capabilities:

Of course, the scripting language you use likely offers a library that takes care of that for you -- and you should use it.

Once you know the width of the terminal, printing a horizontal line is easy, for example, by abusing printf's string padding:

The first line tells printf to print as many spaces as there are columns (by abusing string paddin) to a pipe. Note, POSIX does not mention the * syntax, so this may not be as portable as the code above.

The second line tells tr to read from that pipe and replace every space with a hypen.

There are some cases where your rows/LINES and columns do not match the actual size of the "terminal" being used. Perhaps you may not have a "tput" or "stty" available.

Here is a bash function you can use to visually check the size. This will work up to 140 columns x 80 rows. You can adjust the maximums as needed.

2555
How to change the output color of echo in Linux
316
How to get Linux console window width in Python
6
How to fmt.Print("print this on the center")
3
Options for PHP CLI on windows
0
Get terminal layout with PHP CLI on Windows platform
0
Capture output including control characters of subprocess
0
How to print text in center across mobile and pc platforms using python
1
Linux: Ncurses uses wrong tty size while debugging with gdb from terminal with different size
0
How can I show result of brew leaves in multiple columns?

891
How to move the cursor word by word in the OS X Terminal
2985
How do I print colored text to the terminal?
247
(Mac) -bash: __git_ps1: command not found
0
Print to terminal window in python
21
How make Vim fill Terminal window
0
I want to execute a executable with double click in linux, but doesn't work, any ideas?
0
Error getting the number of tabs in "Terminal" window via Applescript on OSX El Capitan
0
Open new terminal window and execute bash file