I'm trying to do what The GIMP does when selecting "color to alpha" with an actual colour.

I've got an image that has the color #a0132e in it, and I want that converted to transparency. Not only that exact colour, but any colour diverting from it, must become that much semi-transparent. That is what "color to alpha" does in GIMP.

I've tried a million different things, but I can't get my head around it. I've been frustrating myself for a couple of hours trying the -fx parameter and it's absolutely weird syntax, so that didn't help at all. Perhaps some of the options for convert will do the trick, but I haven't yet found the right thing to do, and really, I've tried all the things google got me.

Ideally I want to create a script that I can call like this:

Or similar. How can I do this?

First off: Please read also my answer "ImageMagick Command-Line Option Order (and Categories of Command-Line Parameters)". It explains a few basics about ImageMagick's command line structure. Specifically, it explains the major differences between:

These differences are a crucial concept to understand in order to be able to dissect complex ImageMagick command lines.

2. Basics about ImageMagick 'aside' processing

The suggested command is a rather advanced one. It uses parentheses to separate out two different sections of the complete command line.

Parenthesized command sections allow to process images "aside" the main command: It allows you to do some work on a separate image list, and then place the result of that separate processing to the end of the previous list. (You can use multiple, and even use nested parenthesized image processing operations within a single ImageMagick command line.) In a way, it serves as a scratch pad where you work on a subset of images and put the result back into the main image list.

Any opening of a pair of parentheses (" ( ") starts a new image list. All consecutive parameters inside the parentheses apply only to the new image list. The closing (" ) ") part of a respective parenthesis pair finalizes all 'aside' processing and places the resulting image list from the "aside" (this may consist of zero, one or multiple images) onto the main image list.

The only slight change I make to @dlemstra's original command: I escape the ( and ) occurrences with a backslash and replace these by \( and \). This is required so a shell like Bash will not try to mis-interpret these characters as indicating start and end of a sub-shell.

Important to note: when you use the ( and ) delimiters for aside processing, you MUST leave blanks around them -- otherwise they will not work!

First, I'll do some re-formatting to @dlemstra's originally proposed command. This does not change it's meaning, by and large. It only puts each setting and each operation on a line of its own.

(This applies for Mac OSX and Linux -- for Windows just replace all \ line continuation signs by ^.)

In case you are not familiar with it, here is an additional hint.

This output destination can be a file, or show: or whatever else is valid for IM outputs. After writing to the output, processing of the original command will resume and continue.

Of course, it only makes sense to insert +write after the first (or any other) image (sequence) operator (not after any image settings) -- otherwise the current image list will not have changed.

Should there by multiple output images (because the current image list consists of more than one image), then ImageMagick will automatically assign index numbers to the respective filename.

This is a great trick! If you start using it for your own ImageMagick command development, you will soon find it indespensable. It helps enormously with debugging (or optimizing, streamlining, simplifying...) complex command setups.

If you want 'visually enhanced' understanding about the above line-by-line explanation of image settings, image operations and image sequence operations, then run this modified command. Look at each of the images created by the +write commands, and compare them with the respective explanations in the 4th section of this answer:

Ok, meanwhile I've run the previous commands on an input image. The following picture shows it side by side with the original. Maybe the original.png which I picked for the test was not really suitable to test alongside the color '#a0132e'. But since @Thany didn't respond to @MarkSetchells comment asking for an example image, you'll have to live with my choice:

Here are the results of the modified command which used the multiple +write additions to the original command line.

As is to be expected, original.png looks identical to its clone, as well as a few other cloned images do.

Multiple filenames with identical prefixes 1---, 2---,... result from the same +write command, which found multiple images to save in the currently loaded image list. 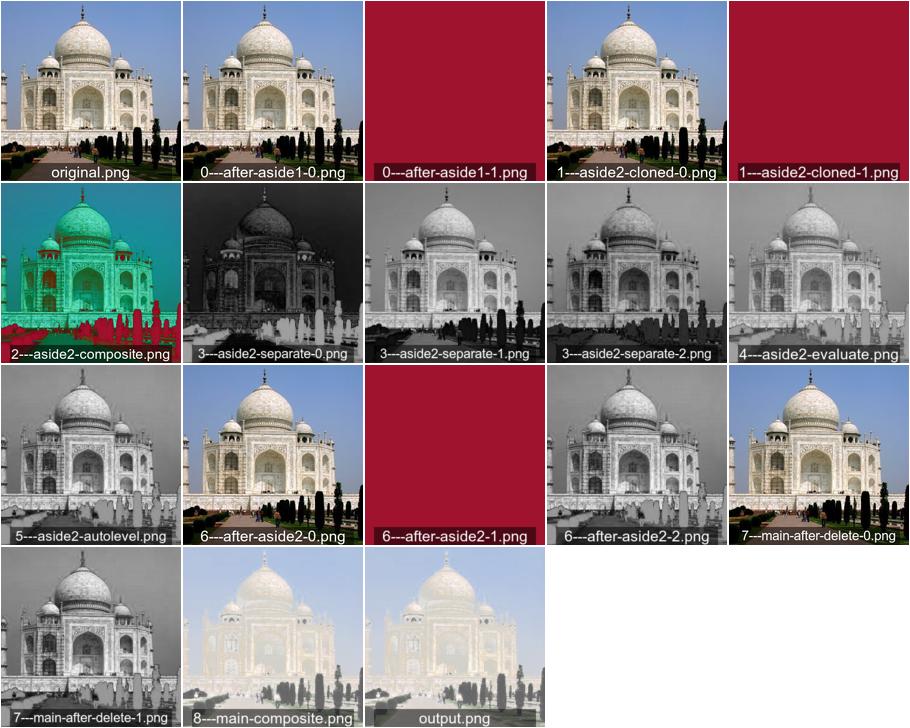 8. Excercise for the reader

Check, if my statement about Line 19 above being invalidated by Line 20 is correct. Remove -compose over from the command line and test if the result is still the same.

This answer I wrote originally in order to explain in detail the command line @dlemstra has given. Dirk's answer is based on an ImageMagick script, color2alpha, which was written by Fred Weinhaus. I only now looked more closely at Fred's script:

ImageMagick has no built in color to alpha algorithm. Fred Weinhaus came up with the following solution that is almost the same as what the color to alpha plugin of GIMP does.

Not the answer you're looking for? Browse other questions tagged imagemagick imagemagick-convert gimp or ask your own question.